From the Vault: American Me 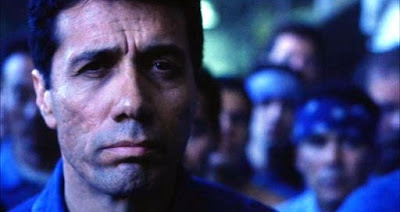 While American Me starts out slowly, the film overcomes its initial scenes and some other problems to become a compelling film.

The film marks the directing debut of actor Edward James Olmos, who stars as Santana, a man in East Los Angeles who finds himself in jail by the age of 16, where he proceeds to build a small crime empire with friends both inside and outside the penal system.

Early on, the film moves rather methodically as it recounts the early life of Santana and his parents, who were victims of the "Zoot Suit riots" of 1943. The incident leaves its mark on Santana's parents and proves to be a catalyst for Santana's own crimes. Despite some stylish touches, this section bogs down, especially with Santana recounting the tales in very cloying voiceover that even rhymes at times.

American Me hurdles past those problems with its depiction of Hispanic life both inside and outside prison. While serving in Folsom, Santana and his life-long friend J.D. (William Forsythe) earn respect as their gang becomes the prison's dominant force.

This occasionally bleak film captures the audience's attention with the prison sequences, including one that shows the path smuggled drugs take to get into the prison and one where Santana uses the government's own subpoena power to arrange a meeting of his gang once prison officials try to break it up.

Eventually, Santana leaves prison and the film gets the opportunity to show the difficulties of adjusting to life after incarceration and further explores the film's motif of the rape culture, both behind bars and in free society.

Olmos gives his usual solid performance, but shows real force as a director as well once the initial sequences end. The screenplay by Floyd Mutrux and Desmond Nakano goes a long way toward showing how Santana, essentially a successful drug dealer, becomes convinced of his own power and loses his way because of it, ironically once he begins to see the error of his amoral ways.

American Me paints a powerful portrait of the evolution of gang problems, especially with an ending sequence that wows the viewer and earns comparisons with Francis Ford Coppola's Godfather films.

An important message dwells in American Me and the movie accomplishes it without heavy-handedness or overemphasis like most message movies, most notably the recent, overblown Grand Canyon. This film makes its points by showing things the way they are, not through yuppie wish fulfillment.