"His genius and his illness were joined at the hip" 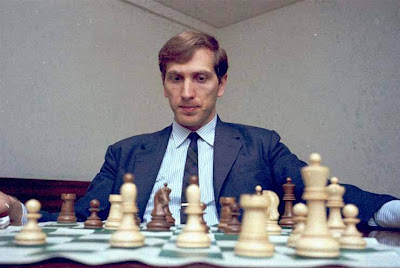 By Edward Copeland
Growing up, I recall hearing the name Bobby Fischer, but when an interview subject in the documentary Bobby Fischer Against the World equates what Fischer was to chess to what Muhammad Ali was to boxing, it didn't mesh with my childhood memories. Of course, Ali stretched out his celebrity and his boxing career and while I did learn to play chess when I was young, it wasn't because of the phenomenon spawned by Fischer, who receded from view after his greatest triumph in 1972 when I was in pre-school. When the later, loonier Fischer re-emerged in the 1990s, that formed my main impressions of the man. That's what makes this documentary, which premieres on HBO tonight, so fascinating. In its first hour, it not only charts Fischer's rise but recounts the legendary world championship match between him and Boris Spassky almost game by game.

This approach allows people who were too young like myself, those not even born and those who recall the 24-game chessboard duel to actually get an approximation of what the 1972 experience must have been like. With all the intrigue that led up to the match in Iceland itself, in a way it reminded me of that great documentary When We Were Kings that chronicled the 1974 championship boxing bout between Ali and George Foreman in Zaire.

It's also very good at showing what a national phenomenon Fischer and the match became. (Henry Kissinger actually was using Fischer versus the Russian Boris Spassky as another weapon in The Cold War.) The film airs the opening of the NBC Nightly News from Sept. 1, 1972 where John Chancellor tells viewers that they'll have the latest on the Watergate burglary, a change in the makeup of the McGovern campaign and the latest unemployment figures, "But first, Bobby Fischer."

Using lots of archival footage of Fischer combined with interviews with multiple subjects, director Liz Garbus (aided no doubt by editors Karen Schmeer and Michael Levine) manages to pack so much into this captivating documentary, that it's amazing it only runs about an hour and 40 minutes.

Bobby Fischer Against the World opens with a quote by Albert Einstein that says:


"Chess holds its master in its own bonds, shackling the mind and brain so that the inner freedom of the very strongest must suffer."

It was apparent early on that Fischer was a genius when it came to chess, but that he also suffered from severe psychological problems.

Fischer began playing chess at 6, but said he didn't get "serious" until 7. He was raised by a single mom, Regina Fischer, who had her own instabilities to deal with, and a fractious relationship with her son. She taught him the game, but didn't push it on him: She was too busy being an activist and committed Communist. Bobby just became obsessed with it himself, spending hours playing against himself. His mother sent him to a psychiatrist as a child who told her that "there are worse things to be obsessed with than chess."

His obsession led to a very fast rise in rankings of American chess players, becoming the youngest person ever to achieve the rank of master at 14 (a record which still stands). Soon after, he won the U.S. Chess Federation's national championship just two months shy of his 15th birthday. Film footage of Fischer from that time and different actions he took show signs of the instability to come.

While not all chess players turn out to have mental problems, many of the very best have shown a history of instability and the documentary talks with some who speculate whether the type of thinking the game requires plays a part. Boris Spassky, his Russian opponent in the famous 1972 faceoff, started to suspect U.S. tampering when, after a slow start, Fischer began to build a lead and Spassky demanded the chairs and tables be swept for any sort of electronic or radiological devices. All that was found were two dead flies which led to the priceless newspaper headline: WHO KILLED THESE TWO FLIES — AND WHY?

Of course, the single Spassky outburst was nothing compared to the he will play/he won't play stunts Fischer put everyone though before the match ever began, including hiding out at the home of Dr. Anthony Saidy, another chess master who was trying to mediate the negotiations of the match, while Saidy's father was dying. When he reminded Fischer of this, i.e. his more pressing concern, Fischer replied, "It's OK. Don't worry about it."

As David Shenk, author of the book The Immortal Game, says in the documentary after describing the type of thinking chess requires because of the mind-boggling number of possible moves, "A good chess player is paranoid on the board, but then if you take that paranoia into real life, it doesn't play well. You end up seeing the real world within the confines of chess."

Fischer's real mental aberrations came to the forefront after his defeat of Spassky. He mostly vanished from view after the initial victory lap and chose to resign his title instead of defend it three years later. Though he was Jewish, he developed virulent anti-Semitic views, had a brief flirtation with a cult but fell out when its leader's prophecy didn't come true. When he re-emerged in 1992, he was still an openly, raging anti-Semite with a rabid hate for the United States. When 9/11 happened, he went on Philippines radio applauding the attacks as something the U.S. had coming.

He already was living in exile then because when he and Spassky had a heralded rematch in 1992, they held it in the former Yugoslavia, violating U.S. sanctions against the then-wartorn country. In 2004, the U.S. had him detained in Japan for trying to board a plane with a revoked passport and sought extradition over the Yugoslavia arrest warrant. Seeking to avoid return to the U.S., he wrote to several countries seeking citizenship. The only country that agreed to grant him citizenship turned out to be Iceland, where he lived what little remained of his life.

In his short stay in Iceland (he died in 2006 at 64), he alienated people as usual but made one friend, a neurologist, Dr. Kari Stefanson, who blames his mental illness for his death because Fischer refused dialysis when he developed kidney problems.
Stefanson concludes:

Bobby Fischer Against the World isn't just an absorbing portrait of an interesting but reluctant public figure, it's also a great documentary look at a specific time in world and pop culture history.

Bobby Fischer Against the World premieres on HBO tonight at 9 p.m. Eastern and Pacific/8 p.m. Central.