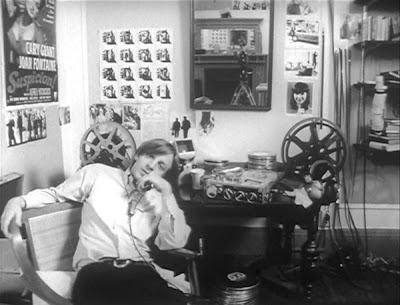 Fandor, the online service which allows people to watch notable independent films on demand, announced today that it has partnered with distributors Kino Lorber and Microcinema International to begin presenting the first coordinated theatrical and digital release of movies. The first title to get this treatment actually will be a re-release — the 1967 classic David Holzman's Diary.

Directed by Jim McBride, who would later make such films as The Big Easy and Great Balls of Fire, was a mock documentary that starred Kit Carson as the title character, a documentary filmmaker who set out to discover himself by making a film turning the camera on himself. The highly praised satire earned raves and was added to the Library of Congress' National Film Registry in 1991.

Under this unique distribution method, David Holzman's Diary will open theatrically only at New York's Museum of Modern Art on June 15 where it will play through June 20. On the same day it opens at the museum, the film will become available for digital streaming on Fandor as part of the site's permanent collection of more than 3,000 titles.

"We see this as a way to provide broad geographic access to a film we're only showing in one location," Kino Lorber co-President Richard Lorber said.

David Holzman's Diary can be viewed for free on Fandor for anyone who signs up for a month's free trial. The service's regular subscription price is $10 a month.

"It's heartening to see Fandor figuring out how to give people access to good films using digital channels," film critic Roger Ebert said.

The second film to premiere this way will be Sleep Furiously, a documentary about a year in the life of a farming community in rural Wales. This film will have a slightly different release pattern. Tentatively scheduled for release July 29, Fandor will show the film for only the 24 hours that coincide with the first day of its New York theatrical release.

Fandor will then take the movie down from its site and add a 50-minute documentary from 2005 that served as the genesis for Sleep Furiously. The short, A Sketchbook for the Library Van, will remain in the Fandor catalog for subscribers who want to know more about Sleep Furiously.

"The reality is that digital distribution is here and now, not a future event," Fandor co-founder Dan Aronson said.