"Your horse is a mirror to your soul." 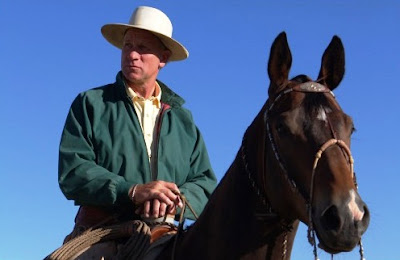 By Edward Copeland
So says Buck Brannaman, the inspiration for the idea of a "horse whisperer" and the subject of the documentary Buck. "Sometimes you may not like what you see, sometimes you will," Brannaman completes his statement. Directed by Cindy Meehl, Buck made the Academy's shortlist for best documentary feature though it didn't make the cut for the final five. It's a fine and interesting film and though my pool of 2011 documentaries runs much smaller than the Academy's, Buck wouldn't have made my final five either.

This isn't meant to imply that there's something intrinsically bad about Buck, it's just that other documentaries proved far more interesting, enlightening or informative to me. What did appeal to me most about Buck was watching and learning about Brannaman's "natural horsemanship" approach to training horses in light of my current enjoyment of the new HBO series Luck. Natural horsemanship is a movement that rejects the use of punishing the animals but instead attempts to speak to the horses in their language as opposed to expecting the horse to learn to speak human. Of course, Brannaman isn't training horses to race, but that's still what sparked my interest because when you get close to them they are just such beautiful, majestic creatures. 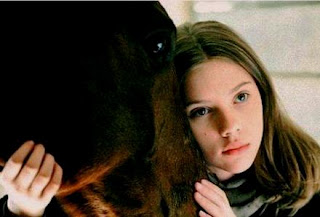 Brannaman was one of the primary inspirations for Nicholas Evans' novel The Horse Whisperer and served as a consultant on Robert Redford's film version. Coincidentally, writer Eric Roth adapted the novel into the screenplay for the movie and he now serves as a co-executive producer on Luck and is credited as the writer of the teleplay for the series' first season finale. Redford appears in the documentary and tells the story of how they had a scene where the horse was supposed to come up and nuzzle the young Scarlett Johansson but since it was a trained Hollywood horse who took its clues from his trainer who had no place to be in the sightline of the shot, they could never get the actor horse to do it. They were losing light and running long and Brannaman suggested using one of his horses. Redford, who directed and starred in the film, was skeptical, telling Brannaman that his horse wasn't an actor horse and wouldn't know how to his marks. Brannaman told him to give him about a half an hour and sure enough, Brannaman's horse hit the marks and nuzzled Scarlett and didn't leave a dry eye on the crew. It turned Redford into a true believer of Brannaman's methods right then and there.

Brannaman, who spends nine months out of the year on the road holding clinics and teaching his techniques, had Ray Hunt, one of the founders of the natural horsemanship movement, as his mentor for many years. Hunt popularized the clinic idea in the 1970s, where he began each one by saying, "I'm here for the horse, to help him get a better deal." Hunt also was known for telling participants his philosophy: "If you get bucked off or kicked or bitten, you obviously did something wrong, and that's just too bad. The horse, on the other hand, is never, ever wrong." 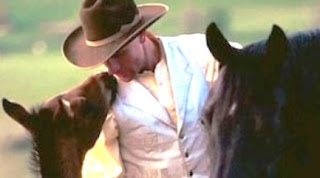 The documentary pulls its surprise, at least for someone like me unfamiliar with Brannaman before watching Buck, and makes it more interesting than a simple profile when it reveals that Brannaman's work with horses didn't come about because he sought to end the cycle of violence and cruelty against the animals but because horses along with the citizens of the town in which he and his brother were growing up rescued the boys from the abuse they endured at the hands of their father. When that section comes up, seemingly out of nowhere, it manages to sadden and inspire at the same time. When his P.E. teacher tells Buck in junior high that he must take a shower because Brannaman has been refusing. When he disrobes, the teacher sees the imprints left by his father's frequent whippings. The teacher says we're not going to have any of that and tells the sheriff who repeats the same words and the boys are rescued from their father and placed in the foster care of a protective, loving couple. It's there were Brannaman began seeking comfort in horses. If Buck contains a major flaw, it's that we never hear what happens to his brother. There's also some sad moments concerning an orphaned horse that a woman brings to Brannaman in hopes that he can help calm the horse to be around other horses and people, but even a horse whisperer can't be a miracle worker.

Buck provides many interesting moments but we're living in a time when a plethora of good and great documentaries get made each year — often at a much higher ratio than fictional features — so the competition can be fierce. Buck is good, but there were better.