All the news that's fit to scroll 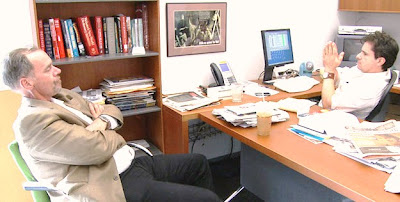 By Edward Copeland
If people appearing in documentaries were eligible to compete in acting award categories, New York Times columnist David Carr belongs among the finalists for supporting actor for allowing such an open, unvarnished presentation of himself to appear in Page One: Inside The New York Times.

Directed by Andrew Rossi who co-wrote the documentary with Kate Novack, Page One does present an interesting portrait at the nation's newspaper of record during a period of crisis for the industry and the Times itself, though I question how truly a "warts and all" picture the film paints. Coming from a newspaper background myself and knowing so many people who have or do work within the industry at publications throughout the country, too much of the documentary sounds like beating the same bad guys to explain the drop in newspapers' circulation and ad revenue while you don't hear one employee at the Times — not even the incredibly entertaining, outspoken and odd Mr. Carr — point a finger at the highest levels of management.

Carr himself is such a fascinating figure if the documentary focused solely on his life (and it nearly does), it would be just as good as the documentary that resulted. Overcoming his crack addiction and the loss of his family only to bounce back, get a job at The New York Times, serves as their Carpetbagger reporter dedicated to covering the awards circuit, particularly Oscars, before leaving to head the paper's first media desk, devoted to covering the changing media and online world. It's hysterical to listen as he discusses his initial resistance to Twitter before finally giving in and getting an account.

It's also amusing when Carr talks about the paper's hiring of Brian Stelter, a blogger extraordinaire who ran the TVNewser blog and marked the merging of old-style journalism with new kind, though Carr sometimes believes Stelter could be a robot built in the Times basement to destroy him.

They do touch on some of the Times' scandals such as Jayson Blair and Judith Miller, but they let her and the editors who let her stories through prior to the Iraq War get off way too easily, then I imagine some prices had to be paid for access.

The documentary does tell of the paper's misfortunes when many speculated whether it could survive (A TV talking head points out that a share of its stock cost less to buy than its Sunday edition). Layoffs hit the newsroom with buyouts of staff that's been there for decades, a situation that has been repeated at newspapers across the nation many times. There's a brief scene of a panel discussing what has gone wrong and former journalist David Simon, now better known as the creator of The Wire and Treme, and he starts to speak the simple truths of what's killing the industry, but the people still in the industry shut him down and you never hear from him again.

Don't get me wrong: As a documentary giving viewers a glimpse at the day-to-day operations of The New York Times, Page One: Inside The New York Times works extremely well and is both entertaining and informative. However, it does regurgitate the same old arguments about what happened to newspapers, laying all the blame at the feet of the Internet when newspapers started sealing their fate before most people had any idea what a URL was. I kept waiting for someone to say what you'd get someone to say at just about any newspaper, alive or dead: "This place is being run by idiots." The list of dumb moves made by publishers and people of various titles who ultimately ran newspapers yet seldom stepped into the newsrooms themselves is a long one and stretches back to when I was in grade school.

In Paddy Chayefsky's ever-more prescient script for Network, in one of Howard Beale's monologues, note what he said in this film released in 1976, but written earlier than that. I've bolded the crucial portion.

So. A rich little man with white hair died. What has that got to do with the price of rice, right? And *why* is that woe to us? Because you people, and 62 million other Americans, are listening to me right now. Because less than 3 percent of you people read books! Because less than 15 percent of you read newspapers! Because the only truth you know is what you get over this tube. Right now, there is a whole, an entire generation that never knew anything that didn't come out of this tube! This tube is the Gospel, the ultimate revelation. This tube can make or break presidents, popes, prime ministers. This tube is the most awesome Goddamned force in the whole godless world, and woe is us if it ever falls in to the hands of the wrong people, and that's why woe is us that Edward George Ruddy died. Because this company is now in the hands of CCA — the Communication Corporation of America. There's a new Chairman of the Board, a man called Frank Hackett, sitting in Mr. Ruddy's office on the 20th floor. And when the 12th largest company in the world controls the most awesome God-damned propaganda force in the whole godless world, who knows what shit will be peddled for truth on this network?

So, you listen to me. Listen to me: Television is not the truth! Television is a God-damned amusement park! Television is a circus, a carnival, a traveling troupe of acrobats, storytellers, dancers, singers, jugglers, side-show freaks, lion tamers, and football players. We're in the boredom-killing business! So if you want the truth…Go to God! Go to your gurus! Go to yourselves! Because that's the only place you're ever going to find any real truth.

So long before the Internet, newspapers were losing circulation and starting blaming the enemy, only then it was TV and they tried to imitate it. It's sad. A former boss of mine once told me that when the newspaper industry dies, it won't be because of competition, it will have committed suicide.

I can't fault Page One for not being that documentary because the documentary that it is, is good. I just can't help it that the overall situation makes me wistful.