Not so good grief 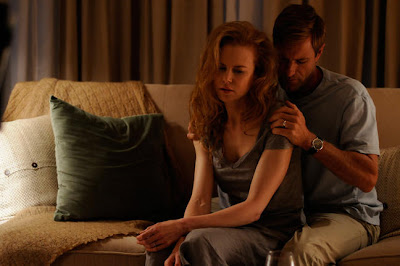 By Edward Copeland
No two people grieve exactly the same way. No book contains rules for proper mourning. When someone loses a spouse, a sibling or, most tragically, a child, outsiders can't judge if their behavior is normal or appropriate. That's not the case with movies on the subject such as Rabbit Hole or performers in them like Nicole Kidman. They're fair game, especially when everything about them rings false compared to countless cinematic examples that depicted grief well.

David Lindsay-Abaire adapted Rabbit Hole from his own Pulitzer Prize-winning play, which I have neither read nor seen but which won one of my favorite actresses, Cynthia Nixon, a Tony Award. Our faithful Broadway correspondent Josh R selected Nixon as one of his 10 best experiences in the 2006 New York theater season. Josh wrote:

As a mother grieving over the loss of a child, the luminous Ms. Nixon brought emotional credibility to a play that might otherwise have gotten bogged down in maudlin, movie-of-the-week style dramaturgy...the actress delivered an eloquent, astutely measured account of the manner in which emotional forbearance serves as a buffer against the unbearable sense of bewilderment that comes in trying to make sense of tragedy. Rather than resorting to histrionics, Nixon registered all the pain of her character’s acknowledgement of her suffering with delicate, nuanced strokes — in a performance that was all the more powerful for what remained unsaid.

Seeing how great Nixon can be in so many different roles, I almost can visualize her performance based on Josh's prose. Needless to say, the character of Becca which won Nixon her Tony probably bore little resemblance to the Becca that Nicole Kidman brings to the screen. Kidman's Becca comes off as an uptight control freak with a superiority complex who treats almost everyone who crosses her path cruelly and as if they are imposing on her time — and none of it has to do with sadness over the death of her son. She makes Mary Tyler Moore's character in Ordinary People look warm, open-hearted and loving by comparison.

Every choice Kidman makes as Becca turns out to be wrongheaded and misguided. You never get a sense that this is a woman devastated by the loss of her young son in an accident. She plays Becca more as if the death and its repercussions were more of an inconvenience for her and she treats everyone else in similar fashion with one exception. She starts stalking and then befriends Jason (Miles Teller), the teen who drove the car that struck and killed her son. At times, the scenes between Becca and Jason made me feel as if I were watching Birth 2. Her encounters with Jason are the only moments when she displays anything resembling humanity.

As a result, where a viewer should feel sympathy for Becca, instead you just want someone to slap her. Kidman doesn't play her as someone scarred by a tragedy, she plays Becca as someone you would walk across the street to avoid because she's such a stuck-up jerk. I went back and looked at some of the reviews of the original play in 2006 and nearly all the theater critics had high praise for its entire cast (which also included John Slattery and Tyne Daly) and the production itself, though The New York Times' Ben Brantley admitted that the play itself, "As beautifully observed as Rabbit Hole is, it never rises to the shock of greatness." The reviews also noted the tears the production evoked. In the film version with Kidman, let's just say there's not a wet eye in the house.

As I said, I've neither seen nor read Lindsay-Abaire's play but I have to believe that he changed it a lot for the screenplay because there are too many scenes in the movie that I can't imagine how they would have been depicted in a stage production. There's also the fact that the play had five characters where the movie adds significant new roles played by Sandra Oh, Giancarlo Esposito and Jon Tenney.

The remainder of the film's cast can be great in other works. Dianne Wiest as Becca's mom and Tammy Blanchard as her sister come off best, but Aaron Eckhart feels nearly as false as Kidman does. Some of the blame may rest on the shoulders of director John Cameron Mitchell, who keeps everything and everyone at an icy, removed distance and may have instructed his cast to follow his lead, yet Wiest, Blanchard and Oh find ways to breathe life into their characters, so I don't think that's the case.

Eckhart's role as Howie, Becca's deeply wounded husband, may be hampered since most of his scenes pair him with Kidman's ice queen. He does better when separated from her as in some scenes opposite Oh, but when he has to respond to Kidman's offputting performance, he seems flustered. It's particularly embarrassing when the teen driver Jason comes over to give Becca a comic (which gives the play and the film its title, though without any sort of deeper explanation) and he blows up at him being there and I was again reminded of Birth where Danny Huston goes after the boy. I suppose I should be grateful for small favors — at least it's Eckhart here and not Danny Huston.

As I wrote yesterday, when I reviewed another overrated film, Blue Valentine, one of the biggest headscratchers of this year's Oscar nominations is that the actors branch wasted two of its best actress slots on Michelle Williams and Kidman when there were so many worthier candidates out there. I truly have to believe members just filled in names based on what they heard or read and didn't watch Blue Valentine or Rabbit Hole.

As for Rabbit Hole in general, it's truly a shame because the list of great films about grieving stretches from the beginning of the medium to now. In 2009, you had a beautiful example with Colin Firth in A Single Man. Last year, I celebrated the 20th anniversary of another great example, Men Don't Leave. If you look specifically for a good example of a film about a couple affected by the loss of a child, take another look at 1988's The Accidental Tourist.

I could keep going on with examples of films that tackle the subject of grief better than Rabbit Hole does, but instead I'm just gonna mourn the talent wasted on this film and the time I lost watching it.