The fear is always there 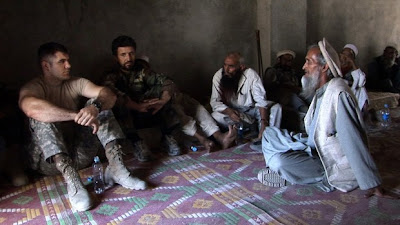 By Edward Copeland
As the Second Platoon Battle Company prepared for its 15-month deployment in the Korengal Valley in Eastern Afghanistan in June 2007, the soldiers knew the area had the reputation for being that country's most dangerous. They also had two civilians joining them on their mission: the writer Sebastian Junger and photographer Tim Hetherington on assignment to chronicle the company's tour of duty. While there, Junger and Hetherington decided to take their project one step further and make their documentary filmmaking debut and that result is Restrepo, an eye-opening look at troops on the ground in Afghanistan.

If Junger's name sounds particularly familiar, it's because he wrote the best seller The Perfect Storm which became the movie of the same name, but you never feel either his presence or that of co-director Hetherington. The film sets the viewer up as the figurative fly on the wall as you watch the soldiers before their arrival and follow them through their tour.

The main assignment for the company is building a road in the treacherous region to ease the transport of supplies, but their outpost lies below mountains from which the Taliban regularly fire on them like "fish in a barrel." Early during their deployment, an ambush takes the life of their medic, Pfc. Juan "Doc" Restrepo.

Two months later, the company's leader, Capt. Dan Kearney, comes up with the plan of constructing a higher outpost deeper in the valley that would be like giving the Taliban "the finger" and they name it Restrepo after their fallen comrade. Kearney has the hardest role in many ways, expressing guilt because he promised his men he'd bring them all back and he feels he "failed" them and also having to deal with local villagers to try to improve relations soured under previous military leaders, who would grab locals and ship them off to Bagram Air Force Base's prison to never be heard from again. Then there is the "cow incident," where a local villager's cow gets caught up in wire fencing and the company puts it out of its misery and the local wants compensation.

While the film certainly contains much tension there are some lighter moments, such as watching local Afghans try to figure out how to poke a straw through a juice box, and the general goofing around among the troops during rare moments of boredom, but those moments do not last long.

The film's most harrowing section comes during a mission called Operation Rock Avalanche, where some civilian locals, including children, accidentally get caught in the cross-fire and the company lose more men.

It's truly something when you watch one soldier break down over another's death, especially since by then you've come to know the faces if not the names of all the men. It's not like the old World War II movies, where you can guess which character will be killed off next, these deaths are tragically and horrifyingly real. When one soldier points out the the far-off enemy who fired the fatal shot, another says calmly, "Next time you see that dude, take his head off." And they do.

Some of the troops talk directly into the camera, about how they've never faced this situation at home since Vietnam or World War II of so many men scarred by the psychic wounds of battle. He says he still has nightmares that keep him awake and despite trying five different sleeping aids, none have helped.

Restrepo gives the viewer a look at combat they've likely never seen unless they've been in it themselves. It's riveting filmmaking. Again, it makes you question the joke of "official journalism" when you see filmmakers embedded with a company produce something this compelling compared to the cheerleading footage TV embeds coughed up at the beginning of the Iraq war.