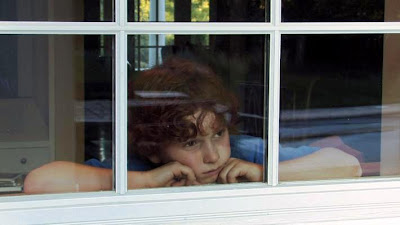 By Edward Copeland
Education seems to be a particularly popular theme in 2010's documentaries. While the great film The Lottery and Waiting for Superman (which I still haven't seen) addressed problems within the system itself, Race to Nowhere looks at the issue from a different approach — the pressure placed on students to pad transcripts with grades, advanced placement courses and extracurricular activities so they get into the best schools and, in theory, the best careers. It's producing an epidemic of overworked, stressed-out, depressed, sometimes suicidal, kids, some as young as grade school, striving to succeed and missing out on childhood as a result.

The problem with Race to Nowhere is that it almost presents the problem as if it springs from the ether and that there aren't adults forcing these ideas on them. As a result, it's a documentary that's good at presenting the problem and suggesting solutions but it walks way too gingerly to avoid placing the blame on where the pressures came from in the first place.

Co-directed by Vicki Abeles and Jessica Congdon, Race to Nowhere has a serious subject and its motives may be noble, but it definitely seems to be made by people looking to pass the buck. While the more notable education-focused documentaries this year concentrated on the problems of failing schools and parents who weren't driving their children to overachieve but simply just to get a good education in the first place, Race to Nowhere focuses on the more privileged students, pushed and prodded to take special classes to bolster those GPAs past the simple 4.0, piling up the hours of homework in addition to other activities outside the academic realm. A little community service never looks bad if you're aiming for the Ivy League either.

Granted, it's been a long time since I was in that rat race, but I was good friends with many who were and nearly all of those students still found time for fun. The portrait Race to Nowhere paints, none of these stressed-out kids have any interest in dating or hanging out. You can't tell me none of these teens are drinking and having sex, no matter what grades they get. I know better. The best students when I was in school were having fun and engaging in adult behaviors they shouldn't have been, but they still made the grades, got into good schools and made successful lives for themselves. Of course, we did laugh when one of the possible co-valedictorians got knocked out of the running because his sole B came in driver's education.

It seems as if the impetus for the film concerns a particular teenage girl so horrified by a bad math grade that she commits suicide. It's a tragedy, but who exactly is it that's pushing all these kids to drive themselves this way?

There's also the Capt. Renault-level of shock at the amount of cheating that goes on. Now, it's not your break-in-steal-the-test-type of cheating, but the kind that has gone on for ages: copying a friend's homework if you didn't have time to finish the assignment. To me what's more worrisome and was somewhat of a problem when I was a student but I'm sure is worse now is that facts are just learned for tests and then immediately forgotten: Nothing is absorbed. It's not surprising: In a short-attention span universe, long-term memory would become a thing of the past. That's why factual errors in the news on important historical (or recent) subjects or silliness such as Oscars drives me up the wall because I do remember.

A few of the educators interviewed offer weak mea culpas, but one thing the film does make a good point of showing is that foreign countries kicking our ass in various subjects actually demand less homework and some of the top corporate leaders in the U.S. didn't finish college, go to the best schools or go at all. Still, there's hardly a mention in the film that aims at braggart parents lashing the whip to get their kids to work themselves to the bone so that they are burned-out wrecks by the time college does arrive.

Doctors testify to younger and younger people showing stress-related ailments such as headaches and stomach problems that can inevitably lead to high blood pressure and heart problems later in life. It's as if as this country moves more toward a nanny state, it doesn't know what to do with its kids. Do we shield them from the harsher truths that are out there or let them see what's going on?

How about letting them be kids first and answering questions when they come up? It seems to me that we had a lot more well-adjusted people until everyone started worrying so much about everything. If by chance there are any students out there reading this, whose parents are on their case about driving themselves to the expense of their health and sanity, turn around and tell them Edward Copeland told you to tell them to back the hell off. If there are any parents out there reading this, just relax. It's their life, not yours. Let them follow their own path.