Life among the walking wounded 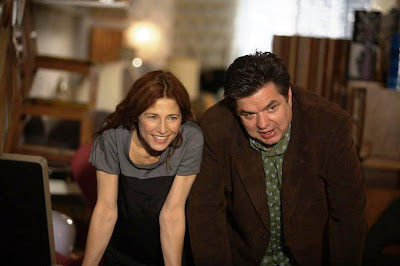 By Edward Copeland
Nicole Holofcener's latest film Please Give will receive this year's Robert Altman Award for Ensemble Performance at the Independent Spirit Awards and kudos to them for picking it out, because Holofcener assembled a great cast for her comedy-drama that plays like a small-scale version of something Altman might have made.

Leading Holofcener's ensemble is her cinematic alter ego Catherine Keener, who starred in the director's previous efforts Walking and Talking and Lovely and Amazing, but Keener is hardly the only show here surrounded by one of the strongest casts I've seen in an independent film in quite some time.

Keener plays Kate, a New Yorker who takes being charitable to the extreme, giving large bills to the homeless and even offering leftover meals to people she thinks might be homeless but who turn out to merely be waiting in line for a seat at a restaurant. Part of her efforts, including several failed attempts at volunteering, stem from the guilt she bears from the way she and her husband Alex (Oliver Platt) make their living: selling furniture and other unique items that they pick up at estate sales.

The couple have less residual guilt for a waiting game they are playing: for their next-door neighbor Andra (the wonderful Ann Guilbert) to die. Alex and Kate bought Andra's apartment and will take possession upon the elderly woman's death so they can expand their own living quarters, something with brings them into contact with the granddaughters Andra raised, the cold cosmetician Mary (Amanda Peet) and the sweet-natured worker at a mammography center Rebecca (Rebecca Hall).

Rounding out the main group of this exploration of social mores are Sarah Steele as Abby, Alex and Kate's insecure 15-year-old daughter, Lois Smith as Mrs. Portman, a patient at Rebecca's clinic and Thomas Ian Nicholas as her grandson Nicholas whom Mrs. Portman seeks to set up with Rebecca.

This doesn't even take into account brief appearances by the always welcome Josh Pais, Kevin Corrigan, Amy Wright and even the great writer Sarah Vowell.

After an awkward gathering so the neighbors can get to know each other better, they find their lives becoming more intertwined, and not always for the best. Alex makes a trip to Mary's workplace for a facial which leads to an affair. Abby finds more comfort from Rebecca during dog walks than she does from her own mother who is more obsessed with helping strangers than her daughter.

What unites most of the central characters is some sort of existential emptiness within them that they all go about Manhattan in flailing attempts to fill. For Rebecca, it might be spying on the woman her ex dumped her for to try to see what she has that Rebecca lacks. For Kate, it's that neverending quest to help the less fortunate, even when she tries to volunteer with developmentally disabled children and just breaks down into tears and they end up trying to help her.

It's not explained why all the characters have been damaged and Holofcener's doesn't tie things up with a neat little bow, but she does draw a well-sketched portrait of her many characters which her ensemble more than ably fills.

There isn't a weak link in the cast but special praise much go to the great Guilbert who probably few will recognize yet most have seen. Well, into her 80s her career has included playing neighbor Millie on The Dick Van Dyke Show and Fran's grandmother on The Nanny. Andra resembles neither in look or character. She speaks her mind and loudly, thanks to being hard of hearing, and much of her "directness" is interpreted as hatefulness, especially by her granddaughter Mary.

Please Give really isn't a plot-driven film, more a multi-layered slice-of-life which overflows with humor and pathos. It's definitely Holofcener's best film so far and one of the year's most pleasant surprises.