Deciding a child's future on a game of chance 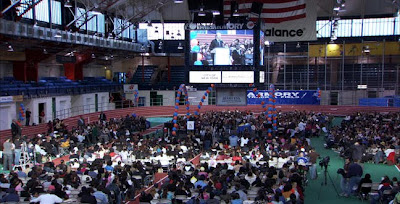 By Edward Copeland
The documentary about the sorry state of American education this year gaining the bulk of attention is Waiting for Superman, which I've yet to see. However, there is another nonfiction film that focuses on the lives of four families and educators in Harlem, New York, and the well-rated charter school Harvard Success Academy. The problem is that so many parents want to get their children out of the decaying public school system and into Harvard Success Academy that it all comes down to the film's title, The Lottery. However, both films have made the short list of 15 films from which the Oscar nominees for documentary feature will come.

Directed by Madeleine Sackler, The Lottery covers several months in the lives of those families who have applied for the rare slots in the coveted Harvard Success Academy. Along the way, there is the possibility that the school could have opened a second location when it applied to take possession of a closed public school building but they are defeated by the powerful teachers union who even brings in outside protesters, including the now-defunct ACORN, to demonstrate against their plan and lobby the New York City government who puts the kibosh on the plan because they view even a building filled with children learning as a threat to the union's warped sense of its own power. To hell with what's best for the children, protecting the jobs of mediocre educators and an empty building proves far more important to the skewed priorities of the teachers' union.

Now if readers of this blog have not figured out by now, my politics definitely lean to the left but that does not mean that I believe all unions are good and having seen enough of their dealings first-hand and read about even more, it's really high time people on all sides of the political spectrum agree that educating the nation's children ranks very low on the list of priorities of teacher unions.

Teachers have the second most important role in a child's life after their parents and people who pursue that career usually are selfless, wonderful people who still are terribly underpaid while the unions seem to care more about extraneous issues such as preventing the firing of the few incompetent ones and power grabs than the quality of the education the children actually receive. They are a disgrace and do a disservice to all labor unions that actually represent their members properly with high-minded issues as their motivations. They haven't helped much as the plethora of states facing budget woes have fired teachers left and right and closed schools to try to makeup money shortfalls, so it's not as if they are serving the teachers any more than they are the students.

As a result, you get the ridiculous system as is portrayed in The Lottery. Families who just want their children to have a shot at a better education than they are going to get in the mess of the public system have to pin their hopes on a game of chance. If they luck out, they get in. If they don't, they can try again the next year but they are stuck in the failing system that surrounds them. It's a disgrace.

Everyone would agree with the cliche that the children are the future but without a proper education system, with this country already based entirely on divisive politics, long ago having lost the ability to practice responsible governance, the nation may very well be doomed. One issue not mentioned in the movie, and this is not a criticism, is the overabundance of overpaid administrators you run into in some places. For example, in my home state of Oklahoma there are 77 counties and 537 public school districts, but they always resist any efforts at consolidation because no one wants to move toward efficiency at the expense of cushy jobs at the top.

The Lottery personalizes the problem in a heartbreaking way as we wait with an older, pious African immigrant father whose wife still resides in Africa and believes God will get his son in, a daughter with a deaf mother and several others. We also hear from various politicians such as Newark Mayor Cory Booker, outgoing NYC schools superintendent Joel Klein (who has had success at closing failing schools, boosting charter ones and putting the union in its place) and officials with the Harvard Success Academy.

The tragedy of The Lottery and the U.S. public school system itself is that statistics show that 58% of African-American fourth-graders are functionally illiterate and countless parents try to flee that failing system each year. Of course, children of all races are getting a bad education and it's a national tragedy.

It only grows worse as they age. I have a 33-year-old caregiver and I was shocked the other day when the subject of World War II came up and he asked if that was the war in Korea — and he's not a dumb man, just a victim of a bad education. It seems that more and more children are either being educated by their parents or spurred on by their own intellectual curiosity since the schools aren't doing the job.

Every parent who reads this review owes it to themselves to see this movie and then call their idiotic senators and House members (I'm playing the odds here that you are represented by an idiot on both the state and national level) and demand real education reform. The citizens must really take this country back, regardless of party, by scaring the shit out of these coddled jerks in Congress and state legislatures to govern again for the good, not for their cronies, or incumbency will become a thing of the past.

The Lottery will push many emotional buttons as you watch it: sadness, anger, frustration. Still, you must watch it and it's up to all of us to push for the reforms that are needed, no matter how hard we have to fight the entrenched and mind-boggling unions and the legislating sloth. The future depends on it.