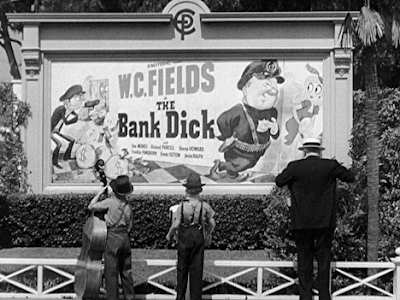 By Edward Copeland
Somehow, artists seem to realize when they're making what will become their final project and usually pick something that serves as some sort of eulogy. For years, director John Huston worked under the assumption that when he foresaw the light coming at the end of his tunnel, he would make a film of James Joyce's short story The Dead and that was what he did. It premiered at the Venice Film Festival on Sept. 3, 1987, exactly a week after Huston died on Aug. 28. Though Robert Altman remained optimistic enough to plan future projects, A Prairie Home Companion played as if it were an epitaph on his career and it did end up as his final film.

Hidden deep within the hilarious, surreal nonsense that is Never Give a Sucker an Even Break, W.C. Fields also implies that it will be his last feature film. Though he did make a few cameos as himself in the seven years between the release of Sucker, which turns 70 today, and his death seven years later, Fields never did make another star vehicle after this one — and what a crazy, one-of-a-kind note on which to end a film career. The first time we see Fields in the movie, he's tipping his hat to a billboard of his last film, the classic The Bank Dick. Two child musicians Butch and Buddy (Billy Lenhart, Kenneth Brown) who are identified in the credits as His Heckler wander by and one declares about the movie, "Was that a buptkie?" Fields — playing himself but credited as The Great Man — tells the boys, "You're about to fall heir to a kitten's stocking." One of the kids ask what a kitten's stocking is. "A sock in the puss," Fields replies. That's just a gag — wait until you get to the plot. 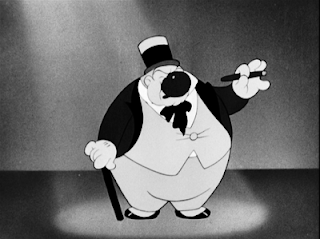 The lunacy of Never Give a Sucker an Even Break begins with a bloated cartoon version of W.C. ballooning to spell out the title and show the various credits of those involved in the film. Directed by Edward Cline, who also directed Fields in The Bank Dick, My Little Chickadee and Million Dollar Legs as well as some of Fields' shorts and uncredited work on You Can't Cheat an Honest Man, the screenplay was credited to John T. Neville & Prescott Chaplin (not that either had another screenplay of note) with an original story by one of Fields' many aliases, Otis Criblecoblis (and original would definitely be an understatement). The story is set at the fictional Esoteric Studios, where the Deanna Durbin-wannabe Gloria Jean plays Gloria Jean, except she is supposed to be Fields' niece (she calls him Uncle Bill), a singing actress in a variety of films. Her mother (who doesn't seem to be credited) also has a signed contract with the studio. The two hope that Fields can sell his new screenplay because if he does, it could mean both of them could quit the business and the studio. "Your Uncle Bill's been good to us," Gloria Jean's mother declares. Gloria Jean tells her mother that she found a horseshoe that very morning so mother and daughter blow on it and make a wish, tossing it over their shoulders. Unfortunately, it crash lands on a pile of water cooler bottles.

What's fascinating about Fields here, aside from the truly bizarre notions he presents, is that at times it's as if he's invented his own language (and I don't care who the credited screenwriters were — no John T. Neville or Prescott Chaplin could come up with dialogue such 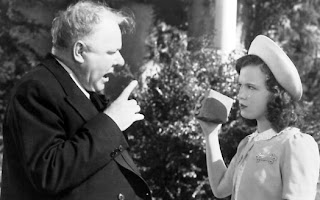 as what comes out of W.C.'s mouth and not make another impression at some point. For instance, early in the film, Fields runs into a man who hopes he might find a role for him in his next picture — apparently not realizing the film's entire premise rises and falls on whether Fields can get another movie made in the first place. First, the hungry W.C. invites the man to dine with him for breakfast, but he doesn't just say, "Would you like to join me for breakfast?" No, instead Fields phrases the inquiry as "How'd you like to hide the egg and gurgitate a few saucers of mocha java?" The man declines, saying he's already eaten, but asks if he can call him. Fields tells him to call him sometime at his house. "What time?" the man asks. "A couple o'clock," Fields replies. Then again, a lot of the humor follows along line familiar to anyone who's familiar with Fields' work. A particularly nice moment comes when his youthful hecklers nail him in the head with a brick while he's talking with his niece. Gloria Jean picks it up and prepares to hurl it back, but Fields stops her. "Hold your temper. Count to 10," he tells Gloria Jean who follows her uncle's advice. When she reaches 10, he advises, "Now you'll get better aim."

In addition to his usual battles with obnoxious waitresses, overprotective husbands, cleaning women who interrupt conversations, etc., the earlygoing of Never Give a Sucker an Even Break plays similarly to many Fields' films with the exception being that he's playing himself and a great many of the performers appear under their own names if not their own profession. For example, the prolific comic character actor Franklin Pangborn plays Esoteric Studios' top producer whose name is Franklin Pangborn. On the other hand, the producer's wife is 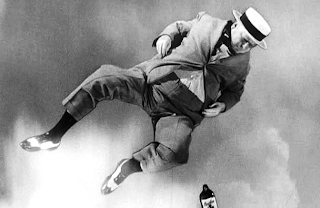 played by Mona Barrie, who was not married to Pangborn in real life. Made in 1941, in its own way, the film was a Charlie Kaufman movie made 17 years before he was born. That part doesn't really kick in though until Fields gets into that script conference with Pangborn and the movie he proposes contains so many loony notions and the action bounces at times between the world of the screenplay and Fields' real life, that sometimes the viewer can get confused. In the script, he places himself and Gloria Jean on a plane. "Why didn't you ever marry, Uncle Bill?" Gloria Jean asks. "I was in love with a beautiful blonde once. She drove me to drink. That's the one thing I'm indebted to her for," Fields answers. So in the film within the film he and Gloria Jean play themselves as well, just to confuse things as much as possible. Booze played a strong role in Fields' comedy and in his life and in this, his last feature, he finally shows how much his love for liquor stands above anything else: He'd take a bullet for it. In the plane's lounge, he rests his bottle on the ledge (though he insists to his niece that he's drinking ginger ale) which, for reasons that deny aeronautics, has an open window. His elbow accidentally knocks the bottle out the window and W.C. goes diving out the window — without a parachute — to retrieve it. 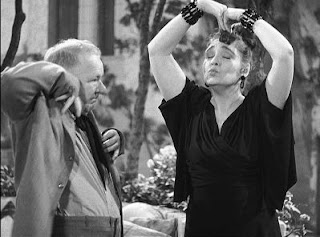 When he lands, it's on a mountaintop divan where he bounces like a trampoline. Once he settles down, he meets a beautiful young blonde (Susan Miller) who has no idea what he is — having never seen a man since her mother hid them from her when her father left before her bath. She asks Fields, "Are you really a man?" He tells her, "I've been called other things before." He asks her if she knows a game, which basically Post Office though he names it something else, and enjoys kissing the pretty young thing when her mother, Mrs. Hemogloben, arrives. Her mother is played by none other than The Marx Brothers' favorite foil, Margaret Dumont. When her daughter, whose name turns out to be Ouilotta, tells her mother about the game the man has taught her, Mrs. Hemogloben eagerly wants to play, closing her eyes and awaiting his kiss. Fields can't bring himself to do it and makes a running leap into a basket that runs down the side of the basket. The women see his escape. The mother declares that all men are alike and he's just like her daughter's father who blamed his exit on drinking. Ouilotta asks her mother if she thinks this stranger drinks. "He didn't get that nose from playing Ping Pong." When Fields get to the bottom, he finds the bottle he saved in his jump from the plane has broken in his escape in the basket. "What a catastrophe," he declares. 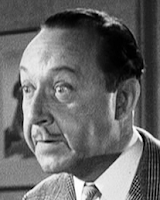 At this point, Pangborn jerks us back to a semblance of reality by erupting about the screenplay so far. "Just a minute, Mr. Fields, there's a limit to everything. This script is an insult to a man's intelligence — even mine. You drop from a plane 10,000 feet in the air and you land on a divan without a scratch. You play Post Office with a beautiful blonde and then you throw yourself over a cliff in a basket. It's impossible, inconceivable, incomprehensible and besides that, it's no good. And as for the continuity, it's terrible. And for my information, off the record, what happened to Gloria Jean? Where has she been all this time?" He does find her and spells out more silliness involving contests to get Mrs. Hemogloben's fortune and reuniting Uncle Bill and Gloria Jean. In the end, not surprisingly, Esoteric Studios takes a pass and basically kicks Fields out. He decides that he's going to leave Hollywood, making Gloria Jean very sad. "But how can you look out for me when I'm here and you're way down there?" she asks him. "You want to go to school, don't you? You want to grow up and be dumb like ZaSu Pitts?" Fields retorts. Gloria Jean says she knows Pitts and likes her and that's just a character she plays. "But this enterprise on which I'm about to embark is fraught with eminent peril. Much too dangerous for a young lady" of your age and delicacy, he tells her.

Fields puts her off long enough by agreeing to take her to a store where she has to pick something up. While there, a woman has purchased a gift for someone who has just had a baby. She comes out and asks the doorman to hail a taxi so she can get to the Maternity Hospital. Fields offers assistance and the woman climbs and a high-speed one-car chase through Hollywood ensues that simply is hilarious. Keep Bullitt! Keep The French Connection! This high- 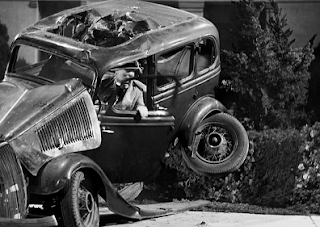 speed journey through tunnels, going the wrong way on one-way streets, etc. really puts them all to shame in high comic style — especially since the woman he's driving isn't even pregnant and passes out at his excessive speed. At one point, his car even gets lifted up in the air by the ladder of a fire engine. When he finally arrives at the Maternity Hospital, his car completely wrecked, he's grateful that he didn't have a wreck or he never would have made it. Gloria Jean, who has arrived by other means, gives the final line saying, "That's my Uncle Bill, but I love him." Never Give a Sucker an Even Break isn't the greatest Fields film in terms of a sustained feature, but it's so uniquely bizarre that you find something new each time you see — and if you ever get a chance to read about the original script, it could have been even darker and stranger. My biggest complaint would have to be that for a film that clocks in at 70 minutes long, they have far too many musical numbers, most by Gloria Jean but one sung by the actress playing Ouilotta as well. That's not what I want in a W.C. Fields comedy, but it's a tiny criticism when weighed against the craziness that comes out of this film.