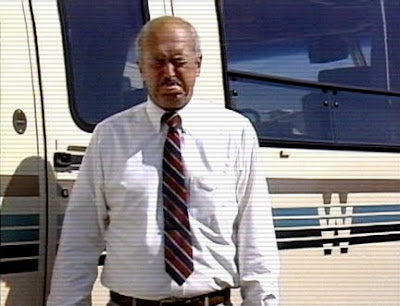 By Squish
Winnebago Man is the sort of film that gets me exited. It's festival fare, it's an indie doc and it's about something I know a little something about, namely obscure viral clips that ooze their way through the Internet.

To be quite honest, I was unimpressed with the trailer for Winnebago Man. It made the film seem like a lame attempt at making money and fame on the back of "some guy." it felt like it would be nothing more than a one-trick premise drawn out to a feature length with little in the way of hooks, surprises or comedy. Instead, director Ben Steinbauer's film goes about about Jack's story in a much more fascinating way.

The film begins by deftly punching through what could have been a "niche piece" by introducing us to Jack Rebney's viral video in such a way as would explain the core of Winnebago Man to even the staunchest Luddite. We learn how viral videos happen, who they happen to, how they make people (in)famous and what happens when that fame is instead finger-pointing humiliation, with references to other famous viral vids such as the Star Wars Kid. From here director Ben Steinbauer follows the themes of humiliation and isolation to a degree that is a little too heavy-handed for drama's sake, but still manages to create an enjoyable mystery to surround our bitter RV salesman. The film soon becomes a quest to find and meet Jack Rebney. What makes him a man worthy of a documentary all to himself? Simply put, he's Internet-famous enough that an indie filmmaker got curious, turned on his camera and asked the question, "Who, where and how is Jack Rebney?"

The endeavour was a risky one, since the first meeting Ben has with "The Angriest Man In The World" is somewhat uneventful. We have a sense of accomplishment to our director's journey, but, as is often the case, the legend was mightier than the man. It seems that Jack Rebney, 20 years later, was nothing more than a secluded, content, mellow, happy guy. The tale gets deeper when Ben Steinbauer receives a call from Jack, who explains that he was on his best behaviour, and the admission that that serene man was but a façade. Jack Rebney is still mad as hell. He's humiliated, he cares nothing about the idiotic fame he's receiving, and he hates his imbecilic audience all the more for making him a meme, because seriously, what does that say about American society?

Aaaaand hook. Now, half-way through this 85 minute tale, we come to the ironic situation where Jack must decide if he wants to continue on this path of fame, or hiss his final public curses at the camera. This is where Ben Steinbauer takes his bias-free documentarian card, rips it up and jumps in. Rather than staying innocuously behind the camera, he dares become a part of the story himself and builds an on-screen bittersweet rapport with Jack that takes Winnebago Man and delivers the sort of human character study that make these types of docs great.

In following Jack Rebney in this character arc brought on by the news of his infamy, Winnebago Man is profound without being preachy, funny without being saccharine, and a first feature that director Ben Steinbauer can be proud of.