Either you fight back or nothing will ever change 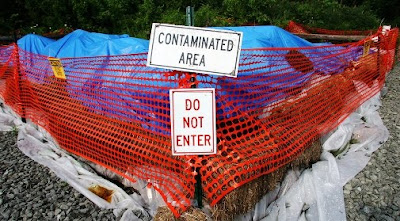 By Edward Copeland
What a wonderful world it would be if one day — just one day, any day — I woke to a world where nothing reminded me how powerless most of us are. That nothing reaffirmed that we live in a country with a government of the corporations, by the corporations and for the corporations. While Lincoln may have perished from the Earth, that system will continue to flourish no matter who or which party holds power and you'll likely feel this way as you watch the documentary Mann v. Ford, which premieres Monday night on HBO.

Mann v. Ford tells the story of the Ramapough Mountain Indians who have lived in the community of Ringwood, N.J., and surrounding areas about 39 miles outside of Manhattan for hundreds of years. In 1955, in the neighboring town of Mahwah, the Ford Motor Co. built its largest plant in North America. Among its activities were spray-painting new automobiles with shiny coats of attractive color. Unfortunately, those paints were toxic and washed through drains on the floor of the factory. In 1967, Ford began dumping the paint sludge and other industrial waste into the nearby area's mountains and abandoned iron mines and some of the sludge made its way to a water source where the tribe's kids frequently played.

Kids loved to play with the stuff, even making pretend pies and eating them. Sure, sometimes their clothes would get so covered they'd have to peel them off and they'd notice that their skin would come with them, but they didn't think the scabs and skin disorders were unusual until they went to school with children who didn't live near the site and didn't have the scars and treated the kids who did like outcasts. Before too long, it wasn't just the children who played near the water source who showed signs of sickness.

By 1971, the state of New Jersey noticed the problem as it was affecting a major source of drinking water and ordered Ford to stop the practice. Thanks to documents uncovered later, Ford sought to avoid a close inquiry by donating their land in the area to a charity which then built new homes on top of the buried waste. As time went on, illness rates rose exponentially to the point that almost every house had faced someone who has had cancer, most women have had at least one if not two miscarriages and other health problems were unusually prevalent including diabetes, kidney stones, gastrointestinal disease and those skin disorders.

In the mid-1980s, the Environmental Protection Agency added the area to its Superfund list of communities in dire need of cleanup in order for safe living. In 1994, the EPA claimed everything was safe now but a cursory search by experts quickly found lots of waste that the EPA and Ford had to have ignored. It led to an award-winning piece of reporting by Jan Barry and Barbara Williams of The Record newspaper of Bergen County based in Hackensack. The reporters admit they received lots of messages from people who still hold bigoted views toward the Ramapough, saying, "They deserved it." Other uncovered Ford documents indicated the dumping site was picked precisely because they thought few would care about the people there.

As the illnesses got worse, one of the members of the tribes, Wayne Mann (the Mann of the lawsuit) met with The Cochran Law Firm to see if they had a case to make against Ford. Led by a tough litigator from Jackson, Miss., named Vicki Gilliam, The Cochran Law Firm, started looking into things. One of the first things Gilliam noticed was that Ringwood had no old people. Everyone was under 65. Her firm, joined by Kennedy & Madonna, LLC and three local law firms, filed suit against Ford in 2006 accusing the automaker of negligent toxic poisoning.

After enough complaints from members of the town, the EPA returned them to the Superfund list in 2006. They blamed erosion for missing stuff before and declared that Ford had cleaned it up again in 2008. Once again, waste was quickly and easily found. Journalist Barbara Williams doesn't know if it's incompetence or corruption. Others speculate that the EPA has never recovered from the hobbling and dismantling of the agency that started during the Reagan Administration. As Williams' fellow journalist Jan Barry said:

"There has been a pattern in this country of these environmental cases even being pushed by the judges to come to a settlement. I'm suspicious enough to think it's because the judicial branch of this government doesn't really want to know the extent of the problems that are being caused by government inaction."

Mann v. Ford contains many other details sure to frustrate and anger most people. One of the most telling points comes from the attorney, Vicky Gilliam, who says that cases that end up the way the one in Erin Brockovich did are rare, that the system is weighted to make certain the corporations survive. As Wayne Mann makes the comparison, if he went out and poisoned 10 kids on purpose, he'd be sitting on death row right now, but since Ford is a corporation, they get off easy. He's just glad that his children are grown and his grandchildren live somewhere else.

"I'm a realist, not a dreamer. Sooner or later, someone is going to have to tell the truth that there's no saving this place."

Mann v. Ford will make you angry, but it's compelling. It debuts Monday on HBO at 9 p.m. Eastern/Pacific and 8 p.m. Central.