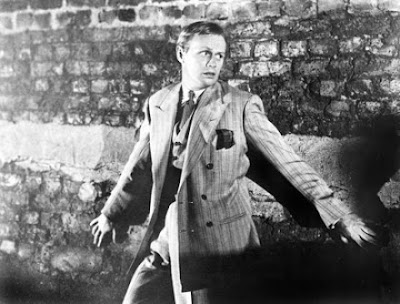 (Warning: possible spoilers contained within)
By Ivan G. Shreve, Jr.
On a list of moviedom’s most pathetic losers, Harry Fabian (Richard Widmark) would surely have to rank at or near the top. A small-time hustler with big dreams…and nothing for collateral, Harry swipes money from his girlfriend Mary Bristol’s (Gene Tierney) purse, stays away for days on end and causes her endless worry with his get-rich-quick schemes. He’s a liar, a swindler, and a man who exercises extremely bad judgment—many of his confederates and associates are not only as bent as he is, they’d sell him out for a pocketful of change. Harry Fabian is a man who’s living on borrowed time…and the sands in the hourglass are slowly running out.

He’s also the sympathetic — yes, hard to believe — protagonist of director Jules Dassin’s classic film noir, Night and the City (1950)…which premiered on American movie screens 60 years ago on this date…after first being seen in “the city” of the film’s title, London, in April of that same year.

As Night opens, Harry Fabian is running through the streets of London, being chased by an unknown assailant — and this won’t be the last time we’ll witness Fabian in constant motion, either. He finds temporary respite in the apartment of his girlfriend Mary, who urges him to grow up because he’s “always running…always in a sweat.” Harry’s much more ambitious — he wants to give Mary a “life of ease and plenty,” adding: “I just want to be somebody.” But it’s just not in the cards for our man Fabian — who must resort to taking money from Mary in order to pay off the individual who’s waiting for him outside.

Mary’s subsistence depends on her job at a third-rate dive called The Silver Fox, which is run by the sebaceous and physically repulsive Philip Nosseross (Francis L. Sullivan) and his wife Helen (Googie Withers). Mary’s job is “getting drunks drunker,” while Harry functions as the club’s “tout,” luring unsuspecting American tourists into the joint. One night at a wrestling match, Harry makes the acquaintance of Gregorius the Great (Stanislaus Zbyszko) — who is also the father of Hermes Kristo (Herbert Lom), the mobster who controls all of the wrestling venues in London. Gregorius is disgusted by the sort of wrestling sponsored by his son (he prefers the classic Greco-Roman style of brawling) — and by one wrestler, The Strangler (Mike Mazurki), in particular…so Fabian gets the idea to take up the mantle of promoting Greco-Roman wrestling on his own despite the knowledge that Kristo won’t take too kindly to someone muscling in on his racket. But with the support of Gregorius — Kristo will be helpless to do anything about it.

Harry appeals to Nosseross to invest in his venture, but Philip laughs at the idea, assured that Harry can never raise the £400 he’ll need to get it off the ground. In fact, Helen challenges Harry to come up with half the money, vowing that her husband will make good on the other half. After a quick whip-round of his “friends,” Harry is completely “skint” — but Helen offers to front him 200 quid with the proviso that he obtain for her a nightclub license so that she can start her own place and escape from Phil’s greasy clutches. When Fabian shows Nosseross the 200, Phil makes good on his promise…but he immediately suspects that Helen is funding Harry’s half and that ol’ green-eyed monster begins plans for an extended stay.

Kristo learns of Harry’s new enterprise and pays Fabian a visit with his mouthpiece (Aubrey Dexter) in tow…but with the confidence that Kristo can’t lay a finger on him since he’s got his father Gregorius’ support, Harry orders him out of his gymnasium. It’s up to the cuckolded Nosseross to put the kibosh on Harry’s plans—after a meeting with Kristo, Phil tells Harry he’s dissolving their partnership…using as his excuse the argument that wrestling fans in London simply won’t support Greco-Roman wrestling. Fabian will have to arrange a match between The Strangler and Gregorius’ young protégé, Nikolas (Ken Richmond), over Gregorius’ objections…so he cleverly provokes The Strangler into a fight with Nikolas, and convinces Gregorius that the two men will have to settle their differences in the wrestling ring. Gregorius agrees.

Fabian returns to Nosseross with the news that his Nikolas vs. The Strangler bout has become a reality…but he’s still not getting the picture. Phil, determined to stick a shiv into Harry’s back, won’t give Harry the money he needs to close the deal with The Strangler’s manager (Charles Farrell). “You’ve got it all,” he remarks to a sweaty Harry, “but you’re a dead man, Harry Fabian…a dead man.” Desperate, Fabian then resorts to ransacking Mary’s apartment for the money. Stunned by her boyfriend’s betrayal, a clearly shaken Mary can only say: “You’re killing me…you’re killing me and yourself.” Harry returns to the gym with 200 quid but by that time a drunken Strangler has goading Nikolas into settling their differences right now, the box office be damned. In their tussle, Strangler ends up breaking Nikolas’ wrist…and Gregorius steps in to avenge his protégé’s honor. Gregorius, using Greco-Roman tactics, bests The Strangler…but the bout has left him in a weakened condition, and he expires in Kristo’s arms. Kristo then puts the word out: a thousand dollars will be rewarded to the individual who places a now turned-rabbit Harry into his custody.

Scripted by Jo Swerling (with contributions from Austin Dempster and William E. Watts), who adapted Gerald Kersh’s novel of the same name, Night and the City is one of the most underrated of film noirs — a textbook example of how a man’s life can go spiraling out of control by simply grabbing for something that’s out of his reach. It would be the last American film directed by Dassin (until 1968’s Up Tight!) before he was forced to flee the country in light of the Hollywood blacklist, and while that may have been France’s gain (Dassin would later go on to direct classics like Du rififi chez les hommes [1955] and Topkapi [1964]) it was a sorry day for the U.S. cinema — Dassin had helmed several classics of the noir style: Brute Force (1947), The Naked City (1948), Thieves' Highway (1949). Like the characters in Force, Night’s Harry Fabian is just marking time until his execution — he likes to brag that he’s got where he is with “brains and guts”…but he’s only half-right. He’s definitely not the sharpest knife in the drawer, but a lot of his lot in life can also be chalked up to just miserable luck.

As proof that everything Fabian touches turns to shit, consider the circumstances surrounding his nemesis Nosseross’ wife Helen. Helen is revolted by the sight of her husband, and is just counting the days when she’ll be able to give him the big kiss-off and strike out on her own. Harry’s going to be her meal ticket to a better existence — she fronts him the funds he needs to get “Fabian Promotions” out of the gate and only asks that he use his connections around London to get her that precious club license. But hustlin’ Harry double-crosses his “angel” by having a pal forge a license…which he hands off to the unsuspecting Helen. Armed with her certificate of freedom, she says fare-thee-well to Phil—who’s devastated that she’s leaving but knows she’ll be back. “And I’ll want to take you back,” Phil says sorrowfully as Helen slams the door shut. Sure enough, Helen discovers to her horror that Harry’s license isn’t on the up-and-up…and comes crawling back to her husband, only to find him stone cold dead. A cackling flower lady (Ada Reeve) then delivers the final blow: Phil’s left everything to her in his last will and testament.

London at first glance doesn’t seem like the “proper” setting for a noir, but despite the offbeat locale, the city’s cobblestone streets and waterfront provide the perfect backdrop for this dark tale of a man’s ultimate appointment with fate; in one scene, Fabian hides in a shot tower—and the mechanical noises in the background sound just like a clock ticking precious moments of his life away. We’re witness to a seedier side of London—not country estates with lush, green lawns but dingy gymnasiums that stink of b.o. and sweat and sleazy juke joints where working girls ply “gentlemen” with drinks. And in the middle of it all is Harry, running around like a rat trapped in a maze—and getting that “deer in the headlights” look when a car suddenly comes into a view and flashes its brights at our out-of-breath protagonist.

The casting in this film is first-rate: old pros like Sullivan and Withers lend squalid authenticity to their roles, Lom is a memorably menacing villain, and Zbyszko and Mazurki (a noir icon since Murder, My Sweet [1944] are hulkingly massive — their grudge match is one of the most memorable scenes in the history of noir. Tierney has a largely thankless role, but the real detriment here is Hugh Marlowe as her Greek chorus confidant; his character seems forced and totally unnecessary — his presence only serves to provide a false “happy ending” for Tierney’s character. (I’ve not read the original book so I don’t know if Marlowe’s character was actually in there from the get-go or whether he was fictionalized — but I don’t feel so bad about not reading the source material because Dassin himself didn’t thumb through it until after the film was completed.) And then there’s Widmark — as sweaty as Edmond O’Brien on a good day, with traces of that maniacal giggle he made famous in Kiss of Death (1947). His Harry Fabian is the kind of guy that’ll make you do a check of all your pockets should you accidentally bump into him — but compared to his acquaintances in the film (who know the golden rule that “money talks and bullshit walks”), he’s a positive prince; his last-ditch attempt to make certain his girl Mary comes out ahead in the final run may be desperate — but nevertheless is redemption in the eyes of the viewer.

Ivan G. Shreve, Jr. blogs at Thrilling Days of Yesteryear — and his admiration for Richard Widmark (“the king of the cinematic rat bastards”) knows no bounds; he strongly believes that Night and the City’s Harry Fabian may very well be the actor’s finest moment onscreen.

Comments:
I actually saw the awful in-name only remake with DeNiro before I ever got my hands on this wonderful movie. After I did, it made me wonder if the people behind the remake had even seen the original or just liked the title since they had so little to do with one another. As for Dassin's, it's truly great. I especially love Sullivan and Withers' work. It was a pleasant surprise to see Googie still around and still great when she turned up again in 1995's Shine.