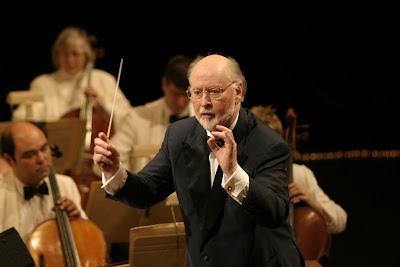 Please see below all the entries we've received for the John Williams Blog-a-thon. Feel free to post a link to your pieces in the comments section or send me an e-mail — we’ll update the links accordingly. If you do not have a blog of your own, send your pieces to me in Word; and we’ll edit ‘em and put them up on the site.

Bobby "Fatboy" Roberts kicks off the festivities with a beautiful story from his childhood.

Matt Zoller Seitz and Ali Arikan have a conversation about John Williams's role in the Star Wars saga.

Jeff Graebner offers an appreciation of the Amazing Stories soundtracks.

The Modernish Father and his modernish son had a blast last fall at Star Wars In Concert.

Drake Lelane turns environmentalist by reusing John Williams and the Crystal Skull Persuasion that he wrote for Ali's Indiana Jones blog-a-thon a couple of years ago.

Neil Sarver jazzes with the master.

Peter Nellhaus listens to the score for Paul Wendkos's Gidget Goes to Rome (1963), and sees the portrait of the composer as a young man.

Kenji Fujishima salutes Williams for opening the door to a personal awareness of music in film.

Sean Ferguson talks about three of his favourite movie scores. Two out of three ain't too bad, Johnny.

Tony Dayoub wants to remind everyone of other pieces of music for sci-fi works the composer created when he was going by the first name Johnny.

George Myers writes about an early score for 1965's John Goldfarb, Please Come Home starring Shirley MacLaine which he saw once but which legal problems prevent the rest of us from hearing.

THE FUTURIST! remembers the evocative, emotional score to The Cowboys.

Dennis Cozzalio sings the praises of his favorite Williams score for a Spielberg movie: 1941.

Bob Glickstein thankfully had the soundtrack of The Empire Strikes Back to tide him over until the film opened.

Larry Aydlette rounds up his own brief contribution to say goodbye to the blog-a-thon on its last day.

Comments:
Although it isn't only about Williams, just last night I posted a lengthy review of the "Amazing Stories" soundtracks, including fairly lengthy comments on the Williams' theme and two episode scores. Here is the link:

My son and I were fortunate enough to catch "Star Wars in Concert" last fall and I wrote a blog post about it and my thoughts on Mr. Williams: http://www.modernishfather.com/2009/11/13/star-wars-in-concert/

and here's where I lamely attempt to submit a post that was already used for Ali's Indiana Jones blog-a-thon a couple years back?

Thanks to Ali and Matt for coordinating this as I've been particularly under the weather and swamped with other things of late preventing too much of my active participation. If I'd had the time, I would have done a piece on my favorite Williams score, the one he did for The Accidental Tourist, where he starts simply as the William Hurt character is alone and just adds instruments as the story progresses. I think it's his most beautiful work. I might also address that some of the criticism of his work comes from a tendency to be bombastic to the point of drowning out the action going on in the film beneath the score such as in Oliver Stone's JFK, but who can be sure if the blame there falls on Williams or Stone? It's particularly annoying in Donald Sutherland's great Deep Throat-esque scene which, honestly, needed no score at all to emphasize its drama.

Hi guys, here is my teeny contribution/plug to your blog-a-thon. Hope you like it.

My brief post about Williams' first score for Spielberg, The Sugarland Express.

Here's my post about John Williams, in a reference to a film we're not allowed to see, "John Goldfarb, Please Come Home" (1965) that he wrote the music for. Apparently the Notre Dame University stopped it in New York, where I saw it on Long Island in an "All-Weather Drive-In".
It starred Shirley MacLaine.

Gentlemen, I submit to you my pure appreciation of 1941, my absolute favorite John Williams score. Enjoy!