I Am Jack's Raging Madness 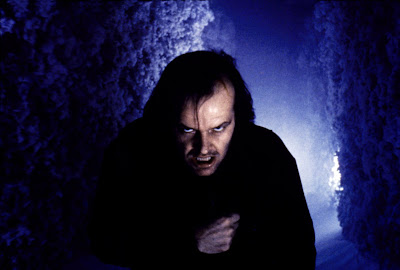 By Jonathan Pacheco
It's well known that Stephen King was, shall we say, less than pleased with Stanley Kubrick's 1980 adaptation of his novel The Shining. Much to the author's dismay, Kubrick removed many of the elements that made the story "patent Stephen King" — particularly King's clear, definitive vision of the supernatural — and stripped the protagonist of nearly all his backstory and characterization, instead using ambiguity and a deceptively "bare-bones" approach to the story as a way to engage his audience in a timeless manner. As King put it, "Kubrick didn't really do the book, he did a Stanley Kubrick film." Precisely, Mr. King, and that's why even 30 years later, Kubrick's film still works so well.

Stay anywhere long enough, and you'll get claustrophobic, even at the expansive Overlook Hotel in Colorado, where Jack Torrance (Jack Nicholson) accepts a winter-long gig as caretaker, with his wife Wendy (Shelley Duvall) and son, Danny (Danny Lloyd) acting as the only other inhabitants of the building during this time. Danny exhibits psychic abilities — or as the hotel chef (also psychic) puts it, he "shines" — and he picks up on some bad vibes coming from the hotel itself, catching visions of brutal murders and elevator bloodbaths. These same evil spiritual forces slowly possess his father Jack with a mean case of cabin fever as the man just tries his darnedest to write his novel, and soon enough, all work and no play makes Jack one of the most memorable film villains of all time.

Kubrick's refusal to explicitly explain the supernatural events in the film contributes to its lasting appeal, intrigue, and debatability, even after three decades. Sure, at first glance, The Shining is downright simple: a guy goes nuts in an isolated hotel and tries to butcher his family. Yet any superficial musing immediately calls into question what we think we believe. Did Jack go mad or was he possessed? Are the ghosts real or merely cabin fever hallucinations? Did the spirits have a purpose for possessing Jack, or was it just one man's descent into madness? Was Jack absorbed by the spirits of the hotel, or does the final shot imply reincarnation? And we haven't even gotten into the two Gradys or the more interesting details of The Photograph (taken in 1921, the year that the relevantly titled The Phantom Carriage was released, a film featuring the source material for the legendary "Here's Johnny!" sequence). Despite what the time-travel-weary fans of Lost might claim, people are much more interested in questions than in answers because questions don't lock you into one person's vision. With The Shining, Kubrick wants to drive you mad with possibilities.

In Jack, King had intended to give his audience an everyman, burdening him with very human problems (heavy alcoholism and a family life rich in abuse and dysfunction), but Kubrick chose again to leave more to the imagination by downplaying and eliminating those histories, changing Jack from an autobiographical personification of Stephen King to simply a frustrated guy with anger issues and an annoying wife. Jack's not quite an empty vessel of a character, but because we are allowed to fill in the blanks with our own experiences, Kubrick in many ways still accomplishes the goal of making Jack an everyman.

For this reason, many attribute much of the disturbing effectiveness of The Shining to Jack's "resemblance" of people we know, particularly our own fathers (I have a friend whose apartment features a framed photo of Jack Torrance, but no pictures of her own dad), though personally, I see Jack most in myself. Struggling to finish his very vague "writing project" (the genericness there working in favor of the film's universal appeal), he finds himself killing time tossing a tennis ball against the wall instead of grinding away at the typewriter, growing more and more frustrated until he begins snapping at his wife, blaming her for his inability to realize his goals. It made me sit up straighter; that's me on the screen, doing those same things and making those same excuses, almost verbatim:

"I'm not being grouchy, I just wanna finish my work. Whenever you come in here and interrupt me, you're breaking my concentration. You're distracting me, and it will then take me time to get back to where I was. Understand? Whenever I'm in here, and you hear me typing, or whether you don't hear me typing — whatever the fuck you hear me doing in here, when I'm in here, that means that I am working. That means don't come in."

The man punctuates his sentences by tearing his paper and smacking his head, benign behavior when compared to his later actions, but nevertheless all too familiar. Is The Shining still scary? Absolutely (the first time I tried watching it seven years ago, I hurriedly cut it off during the Room 237 sequence and refused to revisit it for years. I still struggle to get through that scene without looking away). But for me, its lasting appeal isn't based in its still-functioning ability to make me watch it with the lights on, but in its archetypal portrait of a frustrated, possessed man, frighteningly accurate and endlessly intriguing.

Comments:
Great concise appreciation of an underrated film. Thanks!