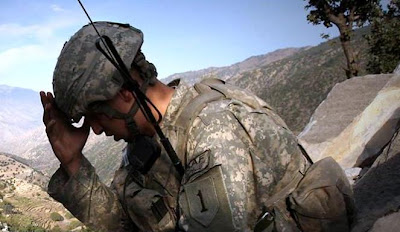 "They took him at 18 and put him through a paper shredder and then sent him back to us to put the pieces back together." — Charilyn Damigo, mother of Marine Lance Cpl. Nathan Damigo
By Edward Copeland
Charilyn Damigo's comment about her son is referring to what happened to him after he returned from serving in the Iraq War and, like many of his fellow veterans, he didn't return the same person who left. Eventually, he was arrested after he pulled a gun on a cab driver of Middle Eastern descent and was sentenced to six years in prison. His is but one of the many tales dating back to the Civil War that tells of the toll combat takes on many troops in the excellent new HBO documentary Wartorn: 1861-2010, which premieres tonight for Veterans Day.

According to the latest figures, 39% of all veterans currently incarcerated have tested positive for Post-Traumatic Stress Disorder, which of course has had a long history of different names. During the Civil War, it was called hysteria, melancholia or insanity. By the time of World War I, it had morphed into shell shock before becoming combat fatigue in World War II.

Using letters and stories, Wartorn tells of the experiences of soldiers in the Civil War and World War I. There also is some startling footage of soldiers from WWII and silent footage of troops in WWI. In interviews, they meet surviving WWII vets who weren't diagnosed with PTSD until 50 years later and speak out for the first time. Some of their stories are heartbreaking, including tales of alcoholism and a man whose inability to talk about his war experiences have kept him from speaking to his sons for 25 years.

The documentary is executive produced by James Gandolfini and produced by some of the same team behind the excellent previous HBO documentary Alive Day Memories. Gandolfini appears on screen interviewing Gen. Ray Odierno, commander of the U.S. forces in Iraq, who estimates that as many as 30% of Iraq veterans suffer some form of PTSD. He also tells how it hit home when his own son lost an arm during an attack in Iraq. Gandolfini also interviews Gen. Peter Chiarelli, vice chief of staff of the U.S. Army, who is working to get PTSD treated on the battlefield as seriously as more conventional wounds. Gandolfini asks if they diagnosed someone on the front lines with PTSD, would they remove him? That's what Chiarelli would like to see happen, arguing that if a soldier had a leg injury they wouldn't keep him in the fight.

Most of the documentary just engenders sadness for the lack of understanding and abandonment by the military once these warriors have served their purpose. The one segment that does manage to raise your ire is the case of Jason Scheurman, a member of the 3rd Infantry Division in Iraq who hailed from a family of soldiers. He saw an Army psychologist who had him fill out a questionnaire where he'd mark about feelings of hopelessness, depression and a desire to kill himself. The psychologist gave him a 10-minute interview, said he thought he was faking and drove him back to his barracks where he gave him his weapon and told him to go inside and clean in while telling his fellow soldiers to give him space. Not surprisingly, Jason killed himself. His family was devastated and it took 15 Freedom of Information Act requests for them to find the full story. In the meantime, nightmares have affected his father's sleep and cost him his job. It hearkens back to the infamous Gen. George Patton story of slapping a soldier and telling him he was yellow and to get back to combat, a story that is repeated again here.

The suicide rate among veterans of Iraq and Afghanistan has proved alarmingly high, but a New York Times headline from shortly after World War I shows that vets then were committing suicide at a rate of two a day. After the Civil War, more than half the people in mental institutions were veterans of that conflict.

As the mother of one of the many veterans who killed themselves says, they train their sons to be killers, but they don't un-train them not to be before sending them back to civilian life. Wartorn: 1861-2010 proves to be a powerful documentary that everyone, be they hawks or doves, owe it to themselves to watch. The stories can be hard to watch, but they should be, especially on Veterans Day and especially as former President George W. Bush makes the rounds pimping his biography and making new excuses for a war that should never have happened and shattered so many souls while he's out trying to make some cash off it.

Comments:
Great review. I really want to take this in. Thanks, Ed.

I watched Wartorn 1861-2010 in Canada without realizing it was a repeat - what a shattering, revealing, candid program, with great images to back up the stories -- and the interviews are amazing. To draw from those wounded men such candid accounts takes a very empathetic interviewer - was it James Gandolfini? I've seen many docs about PTSD but this is the best, or should i call it 'the worst' since it's truly heart-breaking. Anne Tait, Toronto, Canada