Too much democracy in the culture, not enough in society

"I think it's very important writers write in a real voice, in their own voice,
but only if they are really good writers...There are too many books. The books are terrible
and this is because you have been taught to have self-esteem."
— Fran Lebowitz 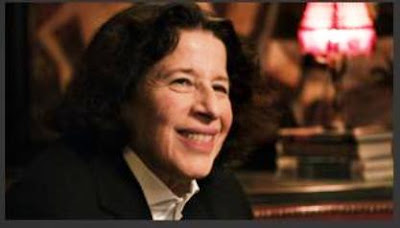 By Edward Copeland
Sometimes so-called "talking heads" documentaries can get criticized as old-fashioned or dull, but there is only one talking head, for all intents and purposes, in Martin Scorsese's Public Speaking and that's Fran Lebowitz and if Fran's doing the talking, that's all you need and you will not be bored. The Scorsese-directed documentary premieres on HBO tonight.

Public Speaking is not a conventional documentary by any measure. This nearly 90 minute film isn't your standard portrait of a person, in this case Lebowitz, checking off the pivotal moments in her life: she was born here, published first here, etc. It's an enjoyable collage of time with Fran in basically three locales: being interviewed on stage by Toni Morrison, in a booth at New York's famed Waverly Inn and on stage giving a lecture and taking questions from an audience. Interspersed with her talk are a variety of archival clips that complement her words. It is, however, one of the most enjoyable documentaries I've seen in some time and worthy of its recent nomination for best documentary at the Gotham Independent Film Awards.

And her words, her wonderfully, wry words are what make this film so special and entertaining. If you happen to be eating while you watch it, you could almost call it My Dinner with Fran as Lebowitz floats freely from one topic to another but mostly the writer sticks to subjects closest to her heart: writing, the arts, culture and New York. What's so remarkable about Lebowitz is that though she gained her initial fame as a writer, her "writer's blockade" as she calls it has limited her to only two books of essays and a children's book in the past 30 or so years. Still, she remains productive through the sharing of her bemusement and sometimes anger at the world around her.

In fact, Lebowitz is such a delight to listen to (and I imagine she would be to converse with as well) that you're tempted to just post a transcript of everything she says in Public Speaking. Not all the topics she brushes across are of monumental importance, but she makes them all interesting.

Since she began her work as a writer in the 1970s for Andy Warhol's Interview magazine, many of her best friends were gay men and she makes a point I've never really heard expressed before. She points out that while it's always mentioned what a toll AIDS took on the artistic community, no one ever seems to mention how it decimated the audience as well. The discerning audience, Lebowitz says, is just as important to culture as the artist. As a result, what passes for art and culture now is broader, more on-the-nose and dumbed down because that larger, smarter audience is gone. It's a sad commentary I'd never thought about but it makes a lot of sense.

She also talks about the changes in her beloved New York since the 1970s. "It wasn't better because of the crime. It was better because it was cheaper, relatively speaking." She also thought from the beginning that making it a tourist mecca as a way to climb out of bankruptcy was a mistake when the idea first came up. "You can't herd hillbillies into a city and not expect it to have an effect." Now, she says, if you run into another New Yorker in Times Square you both make excuses as to why you are there like you used to do at gay bars in the '70s.

On a personal favorite topic of mine, she laments how no one knows what news is anymore. She said she was watching CNN and after a story they said to use Twitter to tell them what you think. "Really?" she asked. "I don't care what anyone else thinks."

Scorsese as director keeps the flourishes to a minimum, content to let Fran be the special effect, though his selection of archival clips is great, even if he steals from his own Taxi Driver and Bernard Herrmann's great score for that film. There is one nice shot of Lebowitz peeking out of one of the large Roman numerals on the giant clock on Grand Central Station.

Public Speaking, which was produced by Vanity Fair editor Graydon Carter, Margaret Bodde, Scorsese and Lebowitz, is a great way to spend time with one of our wittiest minds. It premieres on HBO tonight at 10 p.m. Eastern/9 p.m. Central.

Comments:
Can't wait to see this! I've been a fan of hers for a long time and it's great to Scorsese behind the doc.