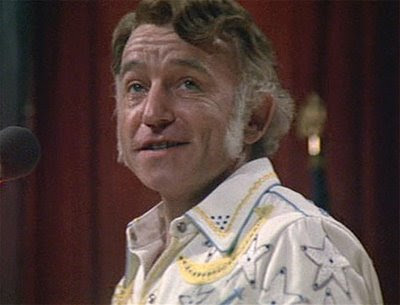 To paraphrase Haven Hamilton's anthem "200 Years" in Robert Altman's Nashville, Henry Gibson must have been doing something right to last as long as he did. Unfortunately, Gibson didn't make it 200 years, dying five days short of his 74th birthday. Not only did Gibson star as Haven, my favorite role of his, he also wrote the songs Haven sang as most of the actors in the Nashvile cast did. Gibson's TV and film career both began the same year in 1963, with roles in several episodic TV series and in Jerry Lewis' The Nutty Professor. His real entry into the public consciousness came in 1968 as a member of Rowan and Martin's Laugh-In. He delivered a hilarious fake public service announcement in Kentucky Fried Movie on behalf of the dead. Nashville was far from his only work with Altman, working with the director in The Long Goodbye, A Perfect Couple and HealtH. Pretender to the Altman throne Paul Thomas Anderson even cast him as a barfly (named Thurston Howell no less) in Magnolia. He led the Illinois Nazis chasing Jake and Elwood in The Blues Brothers. He was the evil doctor conducting experiments and holding former Laugh-In co-star Lily Tomlin hostage in The Incredible Shrinking Woman. He was a member of the supremely odd family living across the street from Tom Hanks in The 'burbs. He did recurring voicework as Bob Jenkins on King of the Hill. His last role turned out to be his frequent appearances as the exasperated judge who frequently saw Alan Shore and Denny Crane (James Spader, William Shatner) in his courtroom on Boston Legal. However, of all his prolific work, he'll always be Haven Hamilton to me. R.I.P. Mr. Gibson.

Comments:
Very sad news that Henry is no more for us. let his soul reach the god & get peace.

You get your hair cut! You don't belong in Nashville! God, he was terrific, and woefully under-appreciated. Great post, Mr. Copeland.

I love his segments "A Poem, by Henry Gibson", reciting his poetry while holding a huge flower..