And the Summer MELTS Away Beautifully 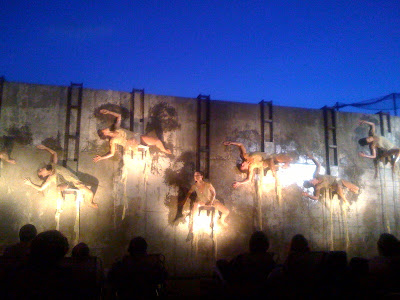 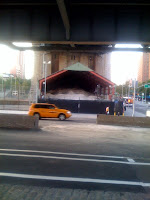 By M.A. Peel
I don’t follow the dance world, but I was happy to connect with it recently because Marcy Schlissel who owns and runs the pilates studio I go to, Body in Motion, was performing in Noemie LaFrance’s site-specific dance installation, MELT.

To describe the piece reads like a Salvador Dali painting: the site is the Salt Pile (where the city stores mounds of salt, patiently waiting for snow season), under the Manhattan Bridge. The salt is under an open-sided shed within a large chain-fenced area, the south side of which has a huge concrete wall. On this wall are hanging eight chairs, anchored by hooking onto the top (think of over-the-door hooks for wreaths), of varying heights.

“Eight dancers perched on a wall and wrapped in sculptural beeswax and lanolin costumes are slowly melting away, progressing in euphoria and exhaustion as if approaching the sun, melting until their souls escape their ephemeral bodies and disintegrate into light.”

The lanolin makes their bodies shine — it’s what is actually melting from them onto the wall.

My first impression of the site was Samuel Beckett’s Happy Days — that stage has piles of sand and Winnie, buried up to her waist. Alastair Macauley of the NY Times had the same thought:

“‘Why then just close the eyes — and wait for the day to come — the happy day to come when flesh melts at so many degrees,” says Winnie in Samuel Beckett’s Happy Days, up to her waist in earth. Later she mentions “this hellish sun” to whose light she is exposed. It is by no means sure that the day of eventual melting will indeed be happy.’ Winnie’s words come to mind while watching Melt.”

(Ah, memories of Fiona Shaw as Winnie at BAM.)

Macauley likes the picturesque nature of the piece, but doesn’t like the whole. “As theater, however, it’s tedious. . . . There’s no real drama in the changes or contrasts of movement. For more than half an hour, a single idea is on display.”

I agree that there is not a clear narrative idea on display, but it is not tedious at all.

A Haiku for Life 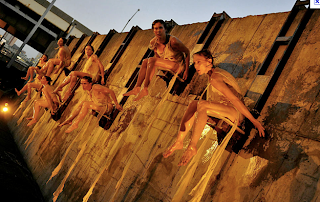 It was a satisfying experience all around: being in that strange, sweet spot under the Manhattan Bridge, hearing the F train loudly rumbling above; the presence of the salt pile itself — every New Yorker knows of its importance after a blizzard. The sky turned from a vibrant cyan when they started to night, complete with the Evening star. The piece had interesting undulations—-the first time the dancers snapped to a complete horizontal pose was alarming. There is a sense of frustration and defiance in the motion: the women's movements are restrained by their circumstances. In the energy in their leg and arm movements you feel that they long to move more freely, but since that's not possible, they do the most with what they can. A perfect haiku for life.

Lighting creates moments of shadow and darkness between the blinding moments, the electronic crickets bring the sense of the country in mid August. There are flashes of synchronized swimming, and solo moments. One thing our experience did not include was personal meltings. It was a coolish 70 degrees when the piece started.

MELT was first conceived and performed for the Black and White gallery in Brooklyn in 2003 for three dancers. From those pictures, it’s easy to see how much it has developed and deepened, and The Salt Pile has to be its prime site. LaFrance is reworking another earlier work, Rapture, that she staged for two aerial dancers on the Frank Gehry-designed Fisher Center/Annandale-on Hudson. The new piece will be performed on Frank Gehry building around the world. I’m really looking forward to seeing it at the IAC building.

This was cross-posted at M.A. Peel originally on Sept. 5. Photos by Peel except for yellow one which is by Guy LaFrance. Performances have been extended until Sept. 12