A Hitch in Time Saves 39 (Steps That Is) 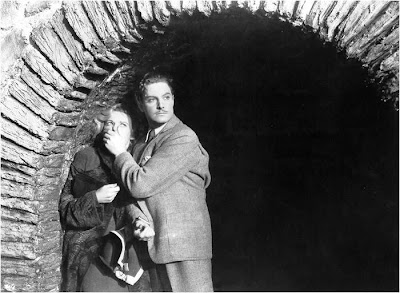 By Iain Stott
Many of those who watch this tremendously fun and super sexy Hitchcock flick, 75 years old as of today, will find themselves asking “well, just what does cause pip in poultry” — a question voiced several times without response to The Memory Man at a grotty music hall in the film’s opening scene. Well, perhaps, not that many; though many more will, no doubt, ask questions of The 39 Steps’ numerous plot holes and contrivances. But art is generally lost on these poor, unfortunate, pedantic souls, whom I blow raspberries in the general direction of. Plrrrp! After all, the plot, MacGuffins and all, is seldom of any real importance in a Hitchcock film. But perhaps they have some valid points.

For instance: why, when an attractive female spy is murdered in his large West End flat, do the murderers neither kill nor attempt to frame our sleeping hero, instead waiting menacingly for him outside? And later on, 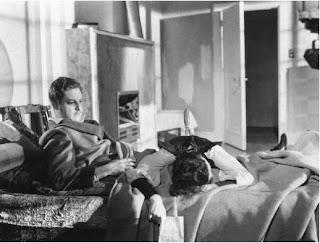 he escapes arrest by the most implausible of means on a moving train whilst crossing The Forth Bridge. About to be apprehended, he opens the external door to his cabin and enters the neighboring one. Not only do the police not look out of the window to see where he has gone, but they also take an age to do anything what so ever. When they do finally pull the communication chord, he easily makes his escape. Later still, he escapes the clutches of a nefarious spy ring by way of a bullet-catching hymn book, which, if not implausible enough, is compounded by the fact that his would-be murderer was not suspicious in the least of the fact that the man that he had apparently just shot in the heart was not bleeding at all. And there are numerous other instances, but I’ve spent long enough on them already. After all, The 39 Steps isn’t social realism; it’s a Hitchcock wrong man comedy thriller with lashings of sex and silliness, which is, perhaps, all the better for its implausibilities. 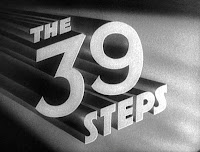 He’s a suave, happy-go-lucky type (a considerable departure from his world-weary literary counterpart) with a pencil-thin moustache, gently slicked-back hair, and a knowing smile. It’s soon established that he’s a 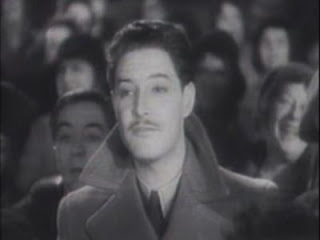 Canadian — not that you’d know it from his accent (in the novel we learn that he moved to Canada from Scotland as a 6-year-old; though this alone would not explain Mancunian actor Robert Donat’s strange linguistic take on the character). He’s also remarkably calm under pressure; after the night’s festivities have been interrupted by a pair of anonymous gunshots, causing the packed theater’s occupants to run, barge and scream their way to the streets, he casually makes his way outside with an incongruous smile and a lady on his arm (the aforementioned life-changer, whom he bumped into during the chaos), calmly declaring, "Well, there we are." And so when she subsequently asks in some nondescript central European accent, "May I come home wis you?" It should come as no surprise that he nonchalantly leaps onto the next passing bus with her.

But this lady isn’t his cool blonde (there’s always a cool blonde); she won’t make an appearance for some time yet. In fact, this particular woman — who introduces our hero to the ideas of spies, rival spies, and aeronautical secrets, and gets the plot moving — is soon mercilessly done away with (after being briefly wooed by Hannay, our hero, with a pan of haddock) with a knife in her back, in the hammiest of death scenes. But there will be more ladies in-between.

A kindly Glaswegian child bride, married to a dour, pious crofter, who is more than old enough to be her father, takes an instant liking to him when he appears on their doorstep on the run from both the police and murdering foreign agents alike. Though she appears not to have experienced much of it herself, she shows him a great deal of compassion, helping him to escape — on learning of his plight — with her husband’s dark jacket, as he busily negotiates a reward with the police on their doorstep. And his sexual magnetism soon shows itself again. A maid, whom he only meets for a matter of moments, and even before her nefarious employer has had chance to coach her, is soon lying to the police for him. 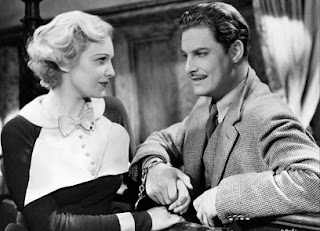 But when he finally meets his blonde — after a very brief earlier encounter, as he made the aforementioned daring if risible escape from a moving train on the Forth Bridge — it is love-hate at first sight. Chance, phony police officers, and a pair of handcuffs bring them together. With him seemingly arrested by the police, she agrees to accompany them to the station for identification purposes; but, much to her chagrin, not the local one. As they make their way through the countryside to Inverary, it becomes apparent — to him at least — that these men are not who they say they are. So when a road blocked by a flock of sheep provides the opportunity, he flees into the darkness, blonde and all. Disguised as illicit lovers disguised as a honeymooning couple, they hole-up in a small inn. Soaking wet, and still handcuffed to him, she removes her stockings in what must surely be one of cinema’s sexiest scenes. Yet at this stage she’s still wary of him; after all he is an accused murderer. But an overheard conversation, which convinces her of his innocence, soon sways her, and her heart begins to soften (although it was already well on its way).

And so they return to London in pursuit of Hitchcock’s MacGuffin — which by this point has served its purpose — indulging in some more spy-related silliness. The Memory Man makes another appearance; the spy ring is uncovered; the plot resolves itself; and the day is saved. But none of this final act really matters, barring a shot of the hand of a certain blonde woman reaching for the still-handcuffed hand of a certain unflappable Canadian, which closes out the film in a suitably and decidedly romantic manner. This is what the film was really about: bringing those two hands together. Spies? Police? Murder? Pah, stuff and nonsense. 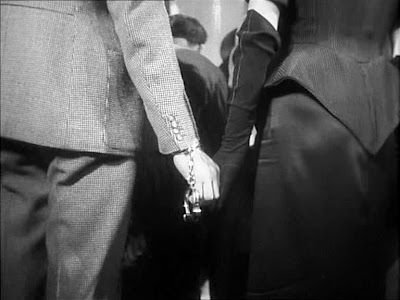 And for those still curious: pip in poultry is, apparently, caused by the infected bird breathing through its beak rather than its nostrils, which itself is probably caused by a respiratory disease of some sort, such as catarrh, roup, or diphtheria. So, now you know!

Comments:
That really is the strangest thing. I've wondered all these years just what the answer to that man's question was. Thanks for the info and the great review!