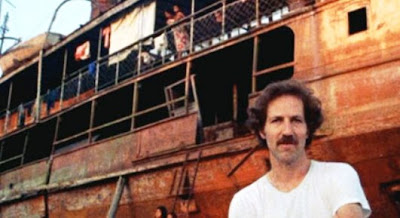 By Edward Copeland
Can a documentary come with spoiler warnings? It probably depends on how much you know about the history of the making of Werner Herzog's Fitzcarraldo going in, but there were some real surprises for me when I watched Burden of Dreams.

For one thing, right off the top I learned something I didn't know: That the film began as an English language film with Jason Robards in the title role and Mick Jagger as his dimwitted actor sidekick. With filming 40% complete, but with numerous complications involving a border war, missed rainy seasons that left rivers unnavigable for the film's boats and the backing out of financiers, Robards became seriously ill and had to go back to the U.S., with orders not to return.

At the same time, the production had gone on so long, Jagger had to back out as well as the Rolling Stones had a commitment to a concert tour. Back to the drawing board for Herzog, who did a massive rewrite, got Klaus Kinski involved and had even more problems. The documentary is so amazing that it's a wonder that Fitzcarraldo got finished at all.

Of course, the big moment of the film involved the dragging of the large boat over a mountain to reach the river on the other side. The man who did this in real life had the good sense to disassemble his boat and do it in pieces, but Herzog insisted on doing it in one piece, making it even more of a maddening challenging.

One thing is for certain: No one should ever watch Fitzcarraldo without watching Burden of Dreams soon after. As an added plus on the Criterion DVD of Burden of Dreams is included an earlier short film by its director, Les Blank, called Werner Herzog Eats His Shoe.

Herzog had years earlier befriended a struggling young filmmaker named Errol Morris who was frustrated about how to get started in the business and Herzog bet him that if he got his film made (a documentary about pet cemeteries called Gates of Heaven), Herzog would eat his shoe, which he proceeds to do at the film's premiere.