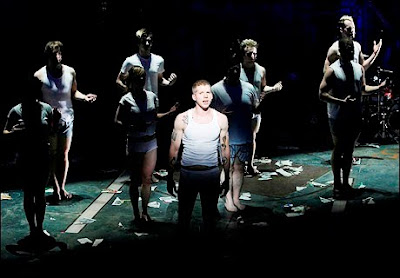 Congratulations, graduating class of 2010! Now that you’ve made through four grueling years of pop quizzes, term papers and midnight cram sessions, you may step to the front of line to claim your reward. If you have a bachelor’s degree, please report to cubicle #27 on the 18th Floor. What, you aspired to something loftier? Not in this economy, babe. If the life of a corporate drone doesn’t appeal to you, you can always just kick back on the couch and wait for something better to materialize — good luck with that. For those of you without college degrees, McDonald’s is currently accepting highly motivated individuals to become part of their customer service team. By the way, graduating class of 2010, in case you weren’t aware — not only is the economy in a shambles, but the overall socio-political picture ain’t too rosy either. You can go into the Army, if you’d like — thanks to your elders, who have destabilized the Middle East to the point where the notion of world peace seems downright jejune, there are plenty of opportunities to serve your country and trade in a limb for a prosthetic. Also, the environment is in slightly better shape, healthwise, than Greta Garbo in the last reel of Camille.

This is what you’ve been left to deal with, movers and shakers of tomorrow — while the baby boomers are cashing their Social Security checks, you’ll be collecting unemployment. Those responsible for both the mess itself, and the unceremonious dumping of it at your feet, will be on the ninth green teeing off if you need them. Only they’d rather you didn’t call.

Sound bleak enough for you? For anyone under 30, the future doesn’t exactly seem to be shimmering with promise; current events have supplied members the younger generation with plenty of reasons to have chips on their shoulders. When Green Day’s American Idiot hit the airwaves in the fall of 2004 — a few weeks shy of George W. Bush’s re-election — it spoke directly to fears and frustrations about the State of the Union and the mental state of the populace (as it turns out, they’re linked). In the classic tradition The Who’s Tommy, the album adopted a loose narrative structure to explore the feelings of disillusionment, alienation and anger not restricted to, but perhaps most keenly felt, by America’s disenfranchised youth.

Those twentysomething malcontents may feel a little more enfranchised — if no less on edge — now that a brand-spanking new Broadway musical not only acknowledges how much life sucks for their rank-and-file, but how necessary — vital, even — it is to be good and pissed off about it. The stage incarnation of American Idiot, bracingly directed by Michael Mayer in an electric production that stomps, shouts and shakes its tattooed fists from the stage of The St. James Theatre, not only asserts that its eclectic consortium of hipsters, grungers and freaks are justified in their beef against the world; it takes a sledgehammer to the quaint notion, posited by musicals of yesteryear, that being young is just a rockin’ good time.

The smartest, most daring choice the creators of American Idiot, The Musical, made in translating Green Day’s defiant, evocative cri de couer from the iPod (we don’t say turntable anymore, gramps) to the stage was to dispense with the presence of a traditional libretto. There’s no dead weight here; at 90 minutes, the show is lean and concise, with spoken dialogue kept to the barest of minimums. The concept is a bit heretical even by modern standards; even Rent, while almost entirely sung through, featured what was essentially conventional dialogue set to music. By contrast, Green Day’s lyrics are oblique and non-conversational — which doesn’t prevent the story from taking shape around them. Couching the score within some kind of literal-minded construct only would have served to dilute its impact; it also would have had the effect of dumbing the material down. The story needs to be kept in abstract form since it is less an enclosed consideration of individual people than an all-encompassing portrait of a generation lost at sea, fighting to keep its head above water. The characters don’t exist on a purely conceptual level — they all emerge as specific types — but there’s also a kind of universality about them; they could, and are meant to be anyone. Fleshing them out in fuller detail would have narrowed the show’s focus. For a show that’s about America, war, cultural hypocrisy and the anesthetizing effect of electronic media (the show doesn’t make that much distinction between television and heroin), that would have been depressingly reductive.

That’s not to say the miscreants, club kids, stoners and loners of American Idiot exist only in service to The Big Idea; they’re prototypes, but not nameless, faceless clones out of a Greek chorus. At the center of the action is a trio of male cohorts, each trying to navigate the muddle of post-adolescence/newfound adulthood while falling through the cracks of the crumbling American dream in wildly divergent ways. Feckless Johnny (John Gallagher Jr.) gets caught in a downward spiral fueled by the heady, neon-lit sensationalism of the downtown drug scene; bullish Tunny (Stark Sands) is swept up in the fervor of mass-market patriotism and winds up a jarhead in Iraq; sullen Will (Michael Esper) ends up stuck at home with a pregnant girlfriend, a dead-end life, and a remote control that has become like an appendage of his arm. Each actor is given his chance to shine in turn; Gallagher, whose talents have only matured since his Tony-winning stint in Spring Awakening three years ago, is particularly fine as the defiant, pleasure-seeking misfit whose self-destructive impulses are nearly indistinguishable from his self-protective ones. As long as Johnny can stay high enough to be oblivious to harsh realities, he doesn’t have to settle into a life of diminished expectations.

The production moves fleetly, in no small part due to its hyper-energized, virtually radioactive ensemble, who throw themselves head-on into Steve Hoggett’s thrashing choreography and belt out Green Day’s standards (beautifully orchestrated by Tom Kitt) as if determined to exploit them for maximum voltage. The design aspects of the show are frequently stunning — there’s even a sequence in which two characters are literally sent airborne — and the sense of anarchy at work is just about infectiousness for anyone who’s ever seized upon the action of rocking out to loud music as a means of blowing off steam. The over-amplification occasionally works to the show’s detriment — there are moments when the decibel level is ratcheted up a bit too high and the show does start to feel too much like a rock concert — but on some level, that’s in keeping with the spirit of the thing, and the kids aren’t likely to mind one iota.

The grown-ups — and you know who you are — aren’t quite as likely to capitulate to the charms of American Idiot, and not solely because their tolerance level for loud music is decidedly lower. Those who came of age on a steady diet of peace-and-love (or, if you’re talking about Tony nominators, Patti Page and Perry Como) may get a tad queasy when confronted with things they’d just as soon not know about; they can handle sex, drugs, and rock ‘n’ roll, but the whole “world is fucked, so fuck it” attitude isn’t going to sit well with parents and grandparents in the audience, especially in a show that is essentially flipping them the bird. Angst is all well and good if tempered by poignancy — American Idiot has poignant moments to spare, but it doesn’t pull its punches. It lands more than a few, and if you leave the theatre feeling more than a bit punch-drunk, the underlying sensation is one of elation.