Doing that Woo-do that Woo does so well 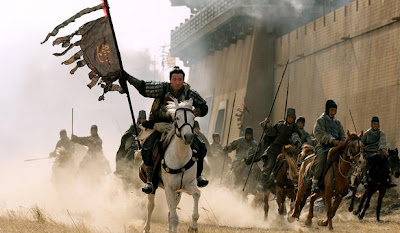 By Edward Copeland
Far too often in Hollywood history, acclaimed directors from abroad come to the U.S. to make films and find what made the artists special disappear along with their careers. I've often wondered where John Woo has been for the past several years and now I know: He returned to Asia to make a true epic, the most expensive film ever made on that continent and broke the box office record held by Titanic in mainland China (and this has more than just special effects, it even has a script), telling a famous story of warfare dating back to 208 A.D.

Released here in a shortened version, Red Cliff was shown abroad as a two-part, nearly five-hour wonder (as well as a single, long feature). This isn't your father's John Woo, but it is a helluva comeback.

After Woo became a favorite for his Hong Kong action films such as Hard-Boiled, the studios lured him to the states where he first tried to enliven a Van Damme film (Hard Target), made Broken Arrow, got to make one really fun film (Face/Off) then got stuck in a rut of forgettable Hollywood product such as Mission: Impossible II, Windtalkers and Paycheck, which came out in 2003 and was the last I'd heard of him.

Given my limited stamina of late, at first I thought of renting the 2 hour, 28 minute version of Red Cliff released in U.S. theaters, but I heard so many raves of the two-part, international cut, that I bit the bullet and put that version in my queue. Now that I've seen it, though I wasn't able to watch it in one sitting due to time and fatigue constraints, I wonder what in the world they could have cut out. The climactic battle alone is more than 30 minutes long. I definitely made the right decision. Maybe, out of curiosity, I will check out the abridged Red Cliff someday, but I'm damn glad I didn't get introduced to it.

In Kenneth Turan's review of the shortened version in the Los Angeles Times, he said the film employed three editors, two directors of photography, 300 horses and a cast and crew that came close to 2,000. After seeing what Woo put on the screen I have to ask, is that all? The scale of Red Cliff truly astounds with all manner of combat scenes that would make Akira Kurosawa jealous if he were alive. Woo even gets to do some ancient fighting scenes I don't think Kurosawa ever got a chance to depict, unless I missed a film where he directed ancient naval warfare. 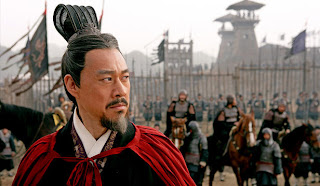 Based on some legendary books about Chinese history, Red Cliff takes place near the end of the Han dynasty when its power-hungry prime minister Cao Cao (Zhang Fengyi) looks to cement his power by squelching some rebellious warlords who stand in the way of his seizing control of territory critical to uniting the land and its people, despite the Han emperor's so-so endorsement of the plan. When Cao Cao succeeds in forcing one of the warlords, Liu Bei (You Yong), and his forces into retreat, Liu Bei's chief strategist Zhuge Liang (Takeshi Kaneshiro) realizes their only plan for success is to align with rival warlord Sun Quan (Chang Chen), forming a particularly strong bond with Sun Quan's military superstar Zhou Yu (Tony Leung, reuniting with Woo for the first time since Hard-Boiled).

It's not all a man's world though, as Zhou Yu's wife (Chi-Ling Lin) proves both a catalyst for Cao Cao's campaign and for some of the war tactics as does Sun Quan's sister (Zhao Wei), who turns out to be a most effective spy and provides the film's most touching subplot.

That's the basic outline and the rest of the film, aside from a quiet and touching moment here and there, moves swiftly from one battle to a strategy session to the next battle and back again, hardly pausing to take a breath yet still finding time to delineate characters, keep the action clear and never allowing the viewer to get lost in the nonstop melees. In fact, the planning sessions on both sides end up being some of the most fascinating parts and reminded me of a film you wouldn't readily think of in relation to an ancient war epic: the great boxing documentary When We Were Kings.

I'd never thought of boxers thinking of strategies before that film and while I've obviously always been aware of planning involved in warfare, Red Cliff's tricks somehow makes it seem fresh. Even though it was the fighting style of the particular eras, when you compare to any Edward Zwick film such as Defiance or The Last Samurai, it usually ends up being two sides marching toward each other. In Red Cliff, the weather comes into play as does the use of disease, using sunlight to your advantage and tricky subterfuge to steal weapons from the enemy during their own attacks.

Woo's camera, always fluid, turns practically liquid in Red Cliff, but never in a distracting way, smoothly soaring over gorgeous landscapes and grisly battles alike, even ending the first half with a pigeon's eye view of the path from one side's camp to the other's. If this film had been made in another era in English and produced by David O. Selznick, its scope alone would have guaranteed an Oscar sweep.

The fighting scenes also play as a throwback to an old style, with little evidence of the trendy type of martial arts that was exciting in Crouching Tiger, Hidden Dragon but soon got tired by loads of imitators. These fierce warriors don't let a little thing such as an arrow in the chest interrupt their fighting. In a way, it reminded me of Joanne Dru in Howard Hawks' Red River, but they do much more than talk with the weapon protruding from their torso.

The performers don't get lost in the spectacle with especially fine work turned in by Zhang Fengyi and Takeshi Kaneshiro. Still, it's the production itself that provides the biggest star turns from the cinematography of Lu Yue and Zhang Li to the editing of Robert A. Ferretti, Angie Lam and Yang Hong Yu; from the production and costume design by Tim Yip to the art direction by Eddie Wong; not to mention the extensive sound, stunt and special effects teams.

Still, the greatest accolades must go to Woo for serving as ringmaster for this cinematic circus. Here's hoping Red Cliff marks the return of a great director to films worthy of his talent.

Comments:
Can't say I'm the biggest Woo fan. But if there aren't any doves, I'm in.

There are pigeons, but no doves.

Not a big fan of CGI effects (the ones in Face/Off--admittedly more primitive--I thought were best) but I'll take them here, as they are, accompanied by Woo's flair and style. At least he grounds the spectacle, unlike Cameron, who spins his from secondhand material (Pol Anderson, Hayao Miyazaki, etc.)

Interesting that his female protagonist here is more proactive, in a feminine way, than in most Woo films. That's a plus.

I did like Windtalkers, tho. It's not history, but it's Woo on a big Hollywood budget, and his flair (again that flair) doesn't disappear under all that money.

Edward:I know this is off topic to this post but I visited The page with your Top 100 movies and I noticed that 2001: A Space Odyssey wasn't on the list.I'm just curious did you dislike the film or were there films that you prefered over it.

Sam, I admire a lot of 2001, but I think it's overrated and prefer other Kubricks much more. If you are interested in reading what I wrote when I revisited it for its 40th anniversary, that post can be found here.

Just finished Part I: It's awesome. There's even a funny nod early on to "Hard Boiled," with the rescuing of the baby.

Thanks. Can't wait for Part II.

It's been so many years since I've seen Hard Boiled that reference flew by me. That's funny.

Recently, I picked up the 2-disc Blu-ray Disc of this film. Since reading your review, I'm even more anxious to get this into my BD player. Thanks for this.