Television that offers you no way out 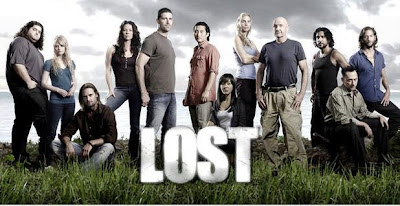 By Alex Ricciuti
There are some TV shows that require a slowly accruing investment on the part of the viewer and that take time for you to warm to. There are others you know right away you won't like, notwithstanding the rave reviews and recommendations from friends and colleagues. Rarely, though, is there a show that you take an instant devotion to as a viewer. That's not to say that Lost is necessarily such a show, except that it really doesn't afford you any other option.

Lost is one of those often-derided, sometimes highly praised, mystery-driven “mythology” shows that somehow breed as much contempt as they do legions of devotees. Yes, the ambition in scope that Lost has can smack of pretense to some (not this author) and it does demand a serious commitment. Miss one episode and you need to do some catching up. Miss a few and the show has left you behind. It's not like a Mad Men, say, where, even if you skip a couple of episodes you can easily get a grasp of the various story arcs and conduct the catching up at a later date, but you can't do that with Lost. Its intricate plotting is pretty unforgiving. It will slip away and leave you with a pile of “work” to do which you can come to resent. Screw you ABC, I have a life.

To the serious critic, Lost can seem like (at best) middle-brow fare, with its plot-driven stories and action-centered grand finales. Characters on Lost don't behave in a rational or even realistic way. If they did, they'd constantly be asking each other questions like, “What the hell happened?” and “What is going on here?” which would make for pretty bad television. No, you have to accept the parameters of the genre here. It's part of how the story needs to be told. That doesn't mean that Lost isn't a great show. Lost is written in a “classical”-style of storytelling, as in the Greek mythologies, in the way it weaves intricate plots and character arcs over the course of its seasons. The show constantly raises moral and philosophical questions, as it is currently doing in Season 5 by having the characters contend with the moral and temporal implications of time travel, but it is an excellent piece of work and the Lost writers have created an authentic mythology, one worthy of literary merit. Just have a look at the scholars who have tasked themselves with studying the show. One philosophy professor in Italy has recently written a book about Lost, as has one of the best bloggers on the show, J. Wood's, whose musings at Powells.com are definitely worth a look. (Sadly, Wood hasn't been posting lately due to his workload and illness).

An incredibly fun game
Lost's producers are engaged in a delicate relationship with their audience. They have to tease us without ever being too coy, or overly mischievous or pretentious at all and that balance has to be struck in everything that they do. For example, Lost's literary references are not layered into the show to make the writers look smart. They're done too obviously for that. Instead, they are meant to inspire us, to look up great works of the past, from The Wizard of Oz to Alice in Wonderland to Virgil's Aeneid, and find connections to the current storyline. They are laid out as an homage and to be taken as either a clue or a red herring or, more metaphorically, as a parallel (sometimes ironic) to the story on screen. They're not there for us to feel smug or superior by “getting the reference” as, for example, the Russian running through the cold, wintry forests of New Jersey in The Sopranos. It's not about the writers patting themselves on the back for being so educated. In fact, they don't hide the fact that they've conducted this grand literary and scientific research for the purposes of the show. And the game is open, almost like a conversation with the fan base. It's very inviting.

Lost plays with genre
Lost has its forefathers in television, and they are many. Genre, stylistic and format references loom on Lost from the anthology series of the 1950s and 1960s (The Twilight Zone and Alfred Hitchcock Presents) to 1970s sci-fi such as The Six Million Dollar Man (just check out those Dharma stations with '70s “computers” running in the background). But Lost is not formulaic. Or, when it does adopt a formula, it can use it and then drop at will in exchange for another. That is one of surprising things about the show, its flexibility with formula and genre.

Certain episodes in Season 5 have been pure sci-fi, while others in previous seasons have indulged anything from noir to melodrama while the myriad of characters and stories often makes the show feel like an anthology series. Kate's back story in Season 1, for example, was pure noir — the bad seed who kills her alcoholic and abusive stepfather, who is actually her biological father too, and is then pursued by the incessant lawman. The way that Nikki and Paolo kill each other off with a paralyzing spider's poison that leads to them to both being buried alive worked as a grand homage to Alfred Hitchcock Presents, despite the mistake that grafting those two characters onto the show was.

While the current fifth season started out as pure sci-fi, it has now morphed into a melodrama with characters coming to terms with the philosophical and paradoxical questions posed by the time travel they have experienced. Already there are clues that the time-travel stuff will be left behind next season and the show will become something utterly different again.

Even that sci-fi element was something that was eased into from the show's previous incarnation as mainly a mystery show. After a couple of seasons of toying with the idea, Lost embraced the science fiction genre unabashedly. Of course, it had to. From the pilot episode it was clear that this mystery show about a supernatural island would have to supply us with at least some explanation as to its nature. The writers were careful to ease us into it, though, and have used the science fiction genre for what it does best — exploring certain ontological and moral themes only it can.

The intelligence of the storytelling is evident in how Lost dealt with the concept of time travel. They, wisely, have not defined the physical laws of time travel in a way that drains dramatic tension from the show. After all, if you can just go back in time and change any outcome you don't like, then there really are no consequences to your actions which doesn't make for good storytelling. So the writers have kept those parameters deliberately obscure. In fact, they made that yet another mystery of the show. Posing the questions: Can you change the past? Should you change the past if you could? What if there are unintended consequences? By posing it as yet another mystery they've turned the narrative dilemma on its head. Until, of course, they have to resolve the question. Maybe they will screw that up. They have left themselves ample room for an answer that remains satisfying while remaining true to the philosophical and moral parameters that have been set.

Paradox of unprecedented TV
Yes, there is a central paradox to Lost that must be acknowledged, even if the show overcomes this flaw by its sheer strength in storytelling. A show that is all about the mysteries can become too much of a contrivance, and one that takes away from the actual drama. But without the mysteries to drive the ratings in the first place, the show would never have lasted long enough to tell this type of elaborate, intricate story it is doing now — they type of storytelling perfectly suited to the medium of television.

The producers of the show have obviously learned lessons about this from previous TV phenomenon such as Twin Peaks, shows which lost their dramatic momentum once their central plot elements were resolved. So they keep us guessing almost as a distraction while providing us with a great story that is really the heart of Lost. The game of guessing what explains what and what will happen next, despite all the cliffhangers and mind-blowing finales, is not really what Lost is about. The show is about the human condition and makes us reflect on perspective (how do you know what you see is true?) or how to define good and evil (is Ben Linus purely bad, or a misguided, self-serving mortal who believes he's doing something for the greater good?), or asks whether we should put our faith in science or in religion? Some heady philosophical delights that can make for great drama when done right.

Finally, Lost is worth watching if only for this reason:

Lost is the first show in the history of television whose entire run will consist of a coherent narrative. A single, plot-driven story, elaborate as it is, told over 6 seasons. That has never before been accomplished on television before and Lost is about to do it. (There is still one season left to go.) The writers have promised a resolution to the show that explains everything that has gone on before. And they had better deliver.

There will be no cut to a black screen here. Expectations have been raised so high for the series that the writers have no choice but to deliver something really spectacular. They just might do it too.

Comments:
I take it you've never seen The Wire, then.