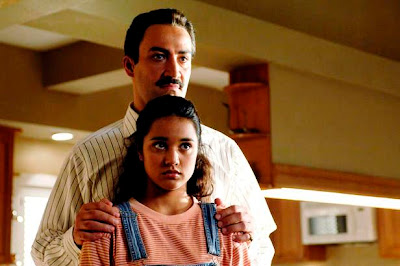 By Edward Copeland
Usually, if I give up on a film without watching it all the way through, I won't bother to write anything about it. However, the 35 minutes I spent with Alan Ball's Towelhead were so excruciating, that I decided to make an exception.

The only reason I knew of it in the first place was that its young lead, Summer Bishil, had been nominated for an Independent Spirit award for female lead. I didn't even realize Ball wrote and directed it until after I gave up (the dopey fantasy sequences, way too reminiscent of the ones Six Feet Under had to have two or three of an episode after a while, should have been a clue).

I learned of Ball's involvement when I read that it had ranked in the Village Voice/LA Weekly critics poll as the second worst film of 2008, bested only by Mike Myers' The Love Guru.

Bishil plays a 13-year-old half-Lebanese American girl sent from her boozy, blonde mom who goes apeshit when she catches her shaving her legs and turning on her new boyfriend to live with her strict Lebanese father whose fairly modern as far as it goes for him but forbids his daughter from doing things such as using tampons for periods (those are for married women) or wearing makeup (that his new girlfriend puts on her).

Hell, dad locks her out of the house when he discovers the tampon. Towelhead is the medicine for anyone who thinks Revolutionary Road is depressing. Hell, it makes The Hours play like a laugh riot. Wait. It gets worse.

Did I mention that Aaron Eckhart plays the friendly pedophile next door? He has a son that Bishil babysits and hangs out with and constantly harangues her with racial epithets. Then again, every student in her school does the same thing. Now, it's not like she's dressed like a Muslim in a burqa. Except for her darker skin, how would they even know her ethnicity unless they'd read the script?

Thankfully, there's a young African-American teen who befriends her. I left before I saw what horrible ending awaited him. The only glimmer of hope in the part I saw was when Toni Collette appeared as a kind neighbor, but I knew she wouldn't drag the girl into a good movie, so it wasn't worth watching the teen shimmy on her seat as she discovers her sexuality.

I don't know how the film ends, but I know from what I watched the way it should. The girl calls a suicide hotline, tells her story and the sympathetic listener tells her that in this case, perhaps it's best if she calls it a life.