The only causes worth fighting for 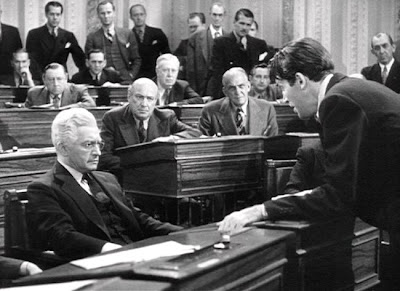 By Edward Copeland
Whenever I prepare to write favorably about Frank Capra, I feel as if I should don a helmet first for the inevitable brickbats that will be launched my way. However, with Mr. Smith Goes to Washington celebrating its 70th birthday, I feel it needs recognition not only because it's a great film but it's a reminder of what a disappointment our elected representatives can be. Oh, if only filibusters were still real filibusters like the one Jefferson Smith gives at the film's climax instead of the toothless maneuver we're stuck with today that denies the right to simple majority rule. (We'll forget for the moment that since the entire Senate was against Smith in the movie, a cloture vote to cut him off would have been easily attainable.) Still, whenever I catch Mr. Smith, no matter how long it has been on, I have to watch until the end. It's the curse of being both a movie buff and a 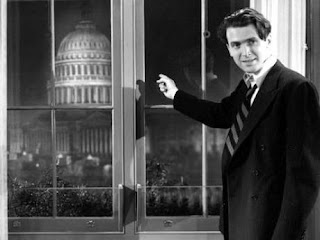 political junkie. In a way, with recent events, it seems to have a bit of timeliness beneath the treacle and idealistic love of how this country should work. (Of course, the film conveniently avoids placing any of the senators within political parties.) With all the recent Senate openings that had to be filled by appointment or fiat, Jefferson Smith (James Stewart) turns out not to be someone who can be controlled by the corrupt political boss of his home state Jim Taylor (Edward Arnold), only Smith turns out to be reverent of the job he's taken, not a loose cannon like Illinois' Roland Burris, appointed by an embattled governor like Rod Blagojevich or someone who will do what he's told. The strength of Capra's film is its fine ensemble. In addition to Stewart and Arnold, you've got Jean Arthur as a cynical reporter who schools Jefferson Smith on the ways of Washington falls for his ideals, Thomas Mitchell as her fellow reporter, Harry Carey as the president of the Senate and last, but certainly not least, Claude Rains as the senior senator from Smith's state, a once great man who, as most long-serving lawmakers unfortunately seem to do, gets corrupted by the moneymen who keep him in office and call his shots. How little sadly has changed in 70 years. There also are bits with many other recognizable character actors such as William Demarest, Guy Kibbee, H.B. Warner, Charles Lane and Beulah Bondi. It garnered a slew of Oscar nominations in 1939, Hollywood's most fabled year for great films, though

of its 11 nominations, it only won for best original story by Lewis R. Foster and Stewart's loss for best actor always has been believed to lead to his win the following year for The Philadelphia Story as a "makeup Oscar." Mitchell won the Oscar for supporting actor that year but not for Mr. Smith. He was amazingly great and busy in 1939, winning for Stagecoach but also giving solid support in Gone With the Wind and Only Angels Have Wings. Other than Stewart, the other two actors nominated by the Academy were Rains and, interestingly enough, Carey. Carey is good, but in a year as competitive as 1939, it's an odd choice to be sure. It's an odd second choice to pick just from Mr. Smith. Alas, the great Jean Arthur wasn't nominated at all. In fact, she only earned a single nomination in her entire career. As for Mr. Smith Goes to Washington itself, like Capra's It's a Wonderful Life, there is such a label of corniness that has been attached to the films that people forget (or never watch) and see there is a bit of darkness as well. Both films feature protagonists who get the shit kicked out of them by life. Of course, George Bailey is a dreamer, but a realist who recognizes the evil around him. Jefferson Smith also is a dreamer, but he's an naive idealist who is surprised to learn the ways D.C. really works. In the case of Mr. Smith, the chief villain is bad enough to run trucks carrying young boys off roads and give them life-threatening injuries when they aren't just using police to turn fire hoses on them. Still, Jefferson Smith doesn't quit and he doesn't cave and the crooks are defeated and right is victorious. It's a Wonderful Life may have an angel, but Mr. Smith in its own way is a bigger fantasy when you consider the crooks and dimwits we have in Congress today. Mr. Smith can give you a little lift and make you dream of a government that could be run for the people under the principles of the Founding Fathers instead of for the powerful and the pols addicted to the perks of their seats in Congress. Oh, and the movie's damn good, too. 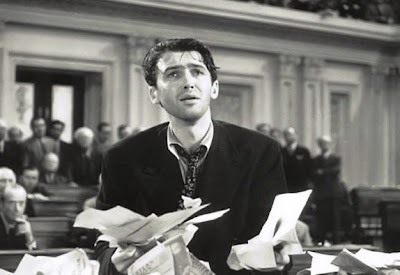 Comments:
I'm even more of an enthusiast - this is one of the all time greats, really it is. I think it's much harsher than it gets credit for - it has a more bitter, pessimistic, and sophisticated view of politics than most contemporary films. The way everything is image, the way everything is co-opted by the system - even cynicism is co-opted by the people in charge. I think the main theme of the film is the difference between innocence and idealism - it sets Smith up to seem to be an innocent idealist, as if the two were the same. Innocence seems to be a virtue, but isn't - it is a very dangerous thing, it makes Smith pliable and weak, it almost ruins him. But idealism, separated from innocence, is another matter - Smith never abandons his ideals, but he learns to fight from inside the system... he embraces the most cynical political maneuver on the books to defend his ideals, and justice...