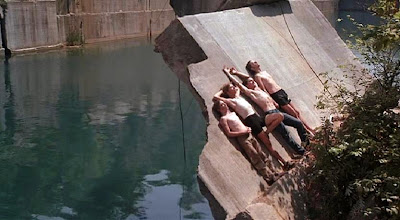 By Edward Copeland
For some reason, in addition to not getting the credit it richly deserves as it turns 30 today, Breaking Away far too often gets lumped into the generic category of "sports movie" when nothing could be further from the truth. When I scanned some reviews of the film after finishing this piece, one writer accused it of being a "formula sports film" that ends with "the big game." Ignoring whether this person even watched Breaking Away, yes, a bike race does appear near the end of the film, but only one of the four young men at the center of the film is a cycling enthusiast and the race isn't where the entire film has been heading. His three friends essentially have no cycling skills and are only there because the race rules require a team of four. Breaking Away, directed by Peter Yates from Steve Tesich's Oscar-winning screenplay, tells a coming-of-age story, or rather trying to avoid it and the clash between blue collar and white collar types in a college town and, yes, it contains some cycling. 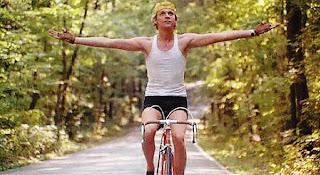 Bloomington, Ind., where Indiana University residents. Dave and his three best buddies Mike (Dennis Quaid), Cyril (Daniel Stern) and Moocher (Jackie Earle Haley). All are the offspring of men that the fratboys for generations have referred to as "cutters" for their jobs working on the stone quarries in the area. The problem is that as quarries mostly have dried up, taking most of the jobs with them. If I've given you the impression that this setting makes for a downbeat movie, nothing could be further from the proof. Breaking Away is one of the most sweetly funny films I've ever seen. In fact, re-watching the film reminded that as much as the time period from whence it came is often lauded (to the point of exaggeration) as the "last golden age of movies," it also was the last great age of serious coming-of age movies. In addition to Breaking Away, they gave us My Bodyguard, Over the Edge. You could even count Saturday Night Fever. Since then, they have be silly, vulgar or have characters who are too cute by half. Back then, they spoke as they might actually have spoken if you’d come across them in real life. As Breaking Away opens, Dave's cycling obsession has focused on the Italian racing team, so much so that he's taken to speaking with an Italian accent, driving his father (the great Paul Dooley) mad. His friends indulge him, especially self-appointed leader Mike (Quaid) as long as he's not seen as doing something unforgivable to him such as getting a job or a wife. The former quarterback, in his first year after high school, seems satisfied with a life of ennui. Moocher (Haley) goes so far as to keep his impending marriage to his girlfriend a secret from his friends for as long as possible. When it is revealed, and Moocher remind Mike that he's no 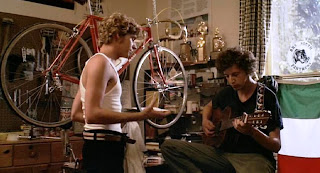 longer the quarterback and they can't go on wasting their lives, Cyril (Stern) responds, "I thought that was our plan — to waste our lives together." Despite the great chemistry of the four young actors, for me the real stars of the film were the pair that played Dave’s parents. Barbara Barrie earned an Oscar nomination for supporting actress for her work. Being a well-known Oscar obsessive, I’ve been frequently asked over the years what I thought was the most egregious example of the Academy not nomination something they should have. There are countless answers to that question, but almost inevitably what comes from my lips first are the words “Paul Dooley for Breaking Away.” He won some critics' awards and the Academy recognized the film in many key categories, including best picture, so his exclusion boggles the mind. He deserved a nomination over all five of the men who did get in and certainly the win over Melvyn Douglas for Being There. As Dave’s father, he is funny, but he’s also concerned and touching, as when he takes his son on a tour of the IU campus and explains to him that he is a cutter, Dave will never be one because that job barely exists. As he admires the university’s buildings, he tells his sons, “I was proud of my work. And the buildings went up. When they were finished the damnedest thing happened. It was like the buildings were too good for us. Nobody told us that. It just felt uncomfortable, that's all.” As for that "big race" at the end, even it defies the formula of the big game moment. Vindication doesn't really change the status of the friends' lives. In fact, there is even a small, sad moment that's almost so brief as to be missed. After the victory (sorry if you think that's a spoiler), Dave's parents congratulate him, Moocher's wife gives him a big hug and Mike's cop older brother (John Ashton) cheers his little bro. Then there is Cyril, Cyril who always has joked about how his father is so understanding about his failures, looking around with a sheepish grin and seeing that there is no one there for him at all. Revisiting Breaking Away again for the first time in many years, it felt as fresh as it did when I first saw it. More people should remember it.

Comments:
This is a wonderful appreciation of a great film. It shows up on cable quite often and I watched it a few months ago and fell in love with the film all over again. You are right about Dooley's performance. He should have gotten more recognition for his fine work. He's something of an underrated actor and is so good at playing sympathetic dads (see SIXTEEN CANDLES) and also bumbling boobs (see STRANGE BREW).

Thank you for the great write up of a film that felt so true when it came out and I was 17 and dreaming of leaving a small town but not knowing if I could. For about 15 years I scared to re-watch it for fear it would not live up to my memory of the 4 times I saw it in the theater when it first came out. I finally watched it again with my teenaged children about 3 years ago. I should not have been afraid. My whole family went around the next few weeks indiscriminately saying "Refund? Refund?" And, thankfully, the scene you referenced between Dooley and Christopher at the college was as touching and underplayed as I remembered, a great example of how Dooley could play his part many different ways.
I wish there was a cleaned up version on DVD. The one I got is not in good shape.

Thanks for the great remembrance of a great film. I went to school in Bloomington, and saw this film several times before I left for college, and it colored a lot of my perceptions of the town. It's one of those rare "coming of age" films that, as rcobeen notes, just gets better as you age. I've been thinking about it recently, too, so your review was nicely serendipitous.

WV: "ramboae," which is presumably the single-celled organism from which all bad Stallone films grow.

Breaking Away is one of the best films of all time in my modest opinion. As an avid bicyclist (though not a racer), I eagerly anticipated the release of this film 30 years ago. Then I watched it and realized it was not about bicycling at all, but about growing up, finding ones place in the world. It's about family and respect and friendship. It contains some of the most exquisite lines of dialog ever. And it also happens to have some exciting (if not particularly realistic) bicycling action.

Thank you for recognizing that fact publicly.

I really loved this post--thanks for putting it up!