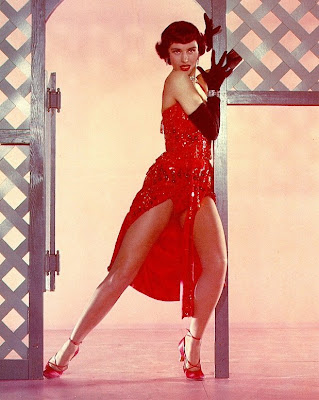 Cyd Charisse, one of the most elegant and expressive dancers to grace the golden age of Hollywood musicals, passed away yesterday at the age of 86. While she tried her hand at a few dramatic roles during her 15-year tenure at MGM, it is for her iconic performances as a dancer, combining unparalleled technical virtuosity with a beguiling musicality and lyricism, that she is cherished.

The tall, raven-haired beauty, whose striking appearance could be alternately wholesome and exotic, left the corps de ballet in the mid-1940s to embark on a career in motion pictures. She was showcased to great effect with featured roles in films such as The Harvey Girls, Ziegfeld Follies and Words and Music, all of which spotlighted her prodigious abilities as a dancer with a series of memorable solos.

The turning point came with her mesmerizing, erotically charged performance in Singin’ in the Rain’s extended dance sequence, “Broadway Melody,” in which she appeared as a long-stemmed speakeasy queen in three-inch heels, bobbed hair and a fringe dress seducing Gene Kelly’s dumbstruck hoofer.

From that point on, she was the studio’s go-to gal for projects involving demanding choreography and a favorite partner of both Kelly and Fred Astaire. In The Band Wagon, Brigadoon, It’s Always Fair Weather and Silk Stockings, she demonstrated how effortlessly she could convey great depths of emotion, from rhapsodic joy and romantic reverie to unabashed sultriness, through dance and movement.

The film historian and critic David Thomson judged her to be “perhaps the greatest movie dancer…as sensual and moving as most actresses have managed to be with words.”