Life after the strike 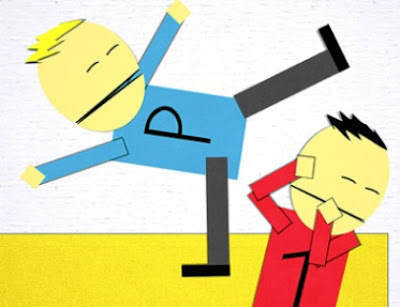 By Edward Copeland
New episodes of various series that screeched to a halt are pretty much back in full force following the writers' strike, with My Name Is Earl finally returning last night (though I wrote and posted this before I saw the finished product). South Park has been back for a few weeks now and this week's episode was particularly good, choosing to mock the strike itself.

The World Canadian Bureau (acronym WGA, in case you were too slow to get the analogy) decides that everyone is making too much money and goes on strike until the rest of the world starts forking over some of all that "Internet money." However, the episode gets even funnier when it turns away from the more specific writers' strike mocking and turns its satiric sites on YouTube, mocking just about every strange celebrity the site has created and underlining the point of how money from the Web is theoretical more often than spendable.

Though Earl returned last night and Scrubs had new episodes in the can when the strike started, NBC 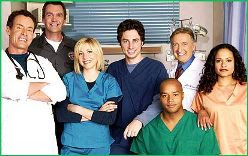 has treated the series' final season particularly abysmally. It announced not once but twice that new episodes were about to air before changing their minds. Then, they cut the already-shortened final season order. This week, they made it official that they wouldn't bring it back next year so it can get the ending creator Bill Lawrence had been working toward all season, though the scuttlebutt is this may result in an unexpected full eighth season on ABC next year. I wish Lawrence were able to do his other idea: Film the final handful of episodes just for the DVD edition, since the series has been running on fumes a lot of the time even in its swan song year and the idea of everyone having to get re-energized for a full, new season at a new network concerns me as to how its quality would be.

One series that has been back with three new episodes already and have more to come (with frequent updates as to where it will air when it switches time slots) is the CW's underrated Reaper. Seeing it again, I forgot 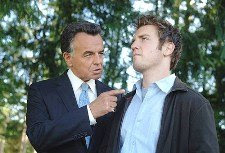 how much I'd really grown to enjoy this show and though I know its renewal chances may be slim, I hope it gets another shot. (It's the CW for God's sake — what the hell else are they going to put on?) In the earlygoing, Reaper risked falling into formula, but it's become more successful at moving away from that while enticing with more specks of ongoing mysteries that I for one would like to know more about. (Why did Sam's dad burn those particular pages of his contract with the devil?) The addition of The State veterans Ken Marino and Michael Ian Black as the boys' neighbors whose homosexuality didn't bother them but their secret lives as demons did has added a new wrinkle as they may be possible allies against the devil (the always great Ray Wise). Of course, there are other questions I have I bet will never get answered, such as why is it so easy for souls to escape from Hell and why do they end up in Sam's town? On top of that, why would the devil care? Wouldn't a little chaos on Earth be in his interest? I just hope I get more Reaper to come.

During the long draught, my channel surfing became more frequent than usual. It wasn't helped by the continued programming malfeasance by the executives at Nick at Nite and TVLand which continues to ruin their lineups. TVLand is bordering on unwatchable with the addition of cut-up feature films (If they were made for TV movies, at least they'd go with the perceived theme of their channel) and even worse, a slate of awful new reality shows which they air and promote relentlessly. Their High School Class Reunion is always promoted on the right side of every show they air and frequently during the same time, a bigger promo for it appears on the left side at the same time. Can you say overkill? After a brief period where the finally removed the quaint Andy Griffith Show from their late night lineup for the mediocre but passable Just Shoot Me, it has returned again. Shows I'd much rather watch such as Cheers still remain relegated to early morning for some reason.

My channel flipping also has caught glimpses of Ultimate Fighting shows. Is it just me or do these matches really bear an uncanny resemblance to soft gay porn? Also, since I have no other place for crazy thoughts like these: Have you all seen the Jimmy Dean breakfast sandwich commercials with the Sun portrayed as a suburban father of two who works in an office? I know I shouldn't think about things like this, but if the Sun really had a wife, wouldn't she be incinerated upon any physical contact, let alone be able to give birth to his children? Shouldn't they bear part of his chemical DNA?

Comments:
Ed, everyone knows the Sun is a big ol' queen! Those sausage commercials bring that point home with a vengeance. You know he's just those kids' manny! "Because I need to go heat the Earthhhhh," he says. And did he get, um, FIRED from his prior breakfast job holding 2 scoops of raisins?

That UFC stuff uses punches to hide the fact that it's two half naked guys playing footsie and dry humping each other. They even call the positions "mounts." I wish John Waters would do a movie about it, or someone would score a match to "I Feel Pretty" on YouTube. Full Disclosure: I've watched more than one UFC match. Also full disclosure: I made out with the Sun. It was back in college and I was curious and he was real hot and...oh never mind.

As for South Park, I got a big kick out of last week's throwback to 1981's R-rated animated film Heavy Metal. I laughed out loud, and none of my younger cronies got the allusion at all. I saw that movie when it came out! Damn I'm old.

"South Park" has been on the air for how long??? and it's still bringing the funny. It's also got the nerve to mock hybrid drivers and VP Al Gore (via Imaginationland) ... that's chutzpah.