Did a woman start the rout of Rommel? 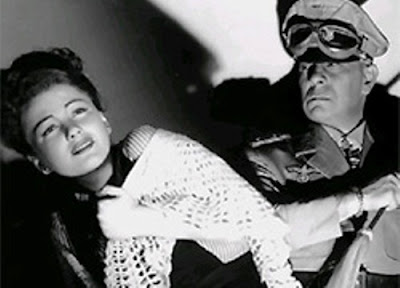 By Wagstaff
Five Graves to Cairo is Billy Wilder's Casablanca. Made at the height of WWII, it is a rousing mix of action, humor, mystery, suspense, propaganda, and even tragedy. It is also one of his earliest outings as a director.

Already all of Wilder's expertise is on display: his visual flair, the biting wit of his and longtime collaborator Charles Brackett's dialogue, their penchant for adapting stage plays (this time one by Lajos Biro) and their special knack for entertaining an audience. It is one hell of a movie, and one that's sadly not yet available on DVD.

The action begins in the desert of North Africa. British Cpl. John J. Bramble (Franchot Tone) regains consciousness and discovers himself in a British tank chugging along driverless through the Sahara. The tank has been shelled and all of his crew mates are dead. He escapes near death by asphyxiation and finds himself stranded on foot surrounded by miles and miles of sand. Bramble finally makes it to a bombed out hotel, The Empress of Britain, and collapses from exhaustion and brain-addling heat stroke.

He is promptly hidden by the hotel's only survivors, Farid, the Empress' owner, and Mouche the hotel's alluring maid. They hide him in the nick of time, too, because Field Marshal Erwin Rommel is about to arrive to use the hotel as his headquarters before pushing on to Cairo.

When Bramble is discovered by the Nazis, he passes himself off as the dead waiter Davos, who just happens to be a German spy. Rommel takes who he thinks is the club-footed Davos into his confidence. In this way Bramble learns of the mystery of the Five Graves — Rommel's plan for moving his army to the east. Here let me add that the mystery of the Five Graves and its eventual solution is satisfying as hell.

Erich von Stroheim, great as always, is excellent as Field Marshal Rommel. Supremely confident in his competence; he is also something of a prima donna. "I don't like women in the morning" he tells Mouche when she brings him breakfast in bed. He also places bizarre demands on his underlings. Upon entering Cairo, he gives orders: "I'll have a lukewarm bath drawn in the royal suite. In the evening, a command performance at the opera ...Aida ...in German ...omitting the second act which is too long and not too good."

Before we learned all about that deceitful, back-stabbing bitch Eve, Anne Baxter put on a French accent to play Mouche. If Five Graves is Wilder's Casablanca, then Mouche is the movie's Rick, sticking her lovely neck out for no one until she comes around tragically at the end.

This movie is a must for Billy Wilder fans. For everyone else — you should check it out if you can — it is a damn good movie.

Comments:
Von Stroheim is really great and while Franchot Tone usually leaves me cold, he is very good here.

I haven't seen this one in a while. I should toss this in the Netflix queue. Thanks for reminding me how good this one is.

Nice work, Wagstaff! I've always liked this film - at times, I think it betrays its theatrical origins (there's a whiff of staginess in some of the early scenes), but it nonetheless makes for a good yarn, well told. The opening sequence - with the unmanned tank rolling across the desert - is a bravura feat of showmanship, and Von Stroheim is, of course, at the very top of his form. I know Copeland took issue with Anne Baxter's accent - which is a bit much, to be sure - but it didn't bother me too much, since films of this period are so rife with exaggerated foreign accents that you really kind of expect it (hell, I'll take Baxter's failed attempt over Walter Pigeon's laziness in Mrs. Miniver - in which he sounded about as British as apple pie - any day).

Sadly, Odienator, as Wagstaff has mentioned, this film is not available on dvd. But if you're really jonesing to see it, I might be able to help you out on that score...