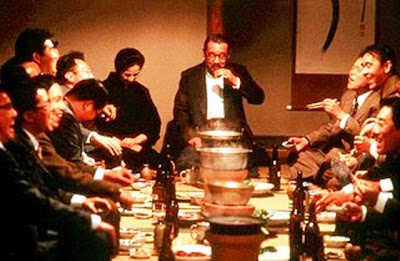 By Edward Copeland
Finally, I caught up with the final film from master filmmaker Akira Kurosawa, Madadayo. It was a long journey even getting the film to the United States. Originally released in 1993, it didn't show in the U.S. until 1998 and didn't get a theatrical release, albeit a cursory one, until 2000, two years after the legendary director had died. I wish I could say it was worth the wait.

While it does have nice moments and visuals you'd expect from Kurosawa, this quiet but overlong film plays like most of his post-Ran movies: As a lesser effort.

Dreams had its moments, but was hampered by its episodic nature and Rhapsody in August, which could have been a great career capper, was undermined by the insertion of Richard Gere, who stuck out like a sore thumb.

Madadayo plays slightly better than the previous two films, but when compared to Kurosawa's past works, it's definitely a more forgettable effort, especially when compared to a masterpiece such as Ikiru.

The simple tale begins with the retirement of a much-loved professor (Tatsuo Matsumura) who quits teaching to concentrate on writing during the middle of World War II, only to see his home destroyed during a bombing raid. His ever-faithful students set out to celebrate the man's birthday each year with a special event where he always shouts back, "Madadayo," which translates to "Not yet," meaning he wasn't ready to die.

It's hard not to read Kurosawa's own thoughts on mortality into that aspect of the story, but unfortunately there isn't much more to the film, including a sequence that seems to go on forever concerning the professor's lost cat. As director's swan songs go, Madadayo doesn't really cut it and you're best sticking to the master's earlier films.