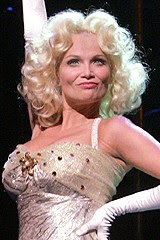 For those of you who don’t live and breathe musical theater, that’s a shout-out to the character of Dainty June, the aggressively adorable triple-threat vaudevillian immortalized in the definitive backstage musical, better known as Gypsy. There’s more than a little of June’s pint-size blonde ambition and overweening eagerness to please in Ms. Chenoweth, the diminutive comic sprite jauntily plucking the fruit from the boughs of Gary Griffin’s revival of The Apple Tree for The Roundabout Theatre Company. The actual line from Gypsy states June’s height as being 5 foot 2, giving her a solid three inches on the adult woman who is strutting her way deliciously through a trilogy of roles from the stage of Broadway’s Studio 54 — but she has nothing on Chenoweth when it comes to measuring star quality.

Jerry Bock and Sheldon Harnick’s 1966 musical, the follow-up to their smash hit Fiddler on the Roof, was originally conceived as a vehicle for the actress/comedienne Barbara Harris. A distinctive performer with a penchant for offbeat characterization, the actress enlivened many a middling Broadway entry (including 1965’s On a Clear Day You Can See Forever, the vehicle that catapulted her to the rank of leading lady) with her signature blend of wide-eyed, slightly discombobulated flakiness and flat-out comic desperation — a combination that worked to delightfully disarming effect in material that made full use of her idiosyncratic charms. The Bock-Harnick offering, director Mike Nichols’ first project after having completed The Graduate, captured her at the peak of her powers, and marked a last hurrah of sorts — after winning a Tony Award for the performance, she set her sights west, embarking on a film career that included memorable turns in films as diverse as Hitchcock’s Family Plot, Altman’s Nashville and the original Freaky Friday. Her leading man in The Apple Tree, a then 30-year-old stage actor named Alan Alda, would go on to even greater heights — in a sly reference to the original production, he can be heard in the current revival as the (pre-recorded) voice of God.

The show is a featherweight if amusing concoction comprised of three one-act musicals presented as an anthology. The first, and by far the most successful of these pieces, is adapted from Mark Twain’s “The Diaries of Adam and Eve,” a satirical re-imagining of goings-on in the Garden of Eden. The second piece, “The Lady or the Tiger?”, comes from Frank Stockton’s open-ended fable about a barbarian princess whose jealous nature may cost her secret paramour his life. The third, “Passionella,” is a frothy '60s romp by Carnal Knowledge scribe Jules Pfeiffer about a dowdy female chimney sweep whose televised fairy godfather transforms her into a Marilyn Monroe-like sex goddess. All three pieces are linked together by the theme of temptation, and the eternal love triangle between Man, Woman and The Devil.

If the sketch-comedy nature of the material doesn’t exactly qualify it as a Broadway classic, it is nevertheless a pleasant diversion that furnishes its cast with plenty of room to preen and strut. Given that the show was essentially been conceived as a series of star turns for its leading lady, Ms. Chenoweth is the most prominent beneficiary. The actress's career trajectory has been swift — she won a Tony for her scene-stealing turn in 1999’s You’re a Good Man, Charlie Brown, and an additional nomination for the smash hit Wicked, which cemented her status as a bona fide Broadway star. The Apple Tree marks the first time I have seen her live on a Broadway stage — at a distance of three yards away, no less — and I’m starting to understand what all the fuss has been about. With her stubborn kewpie doll features and a chipmunk’s squeak that can shift effortlessly – and somewhat freakishly — into a full-bodied lyric soprano, Chenoweth is, in her own way, as distinctive and unique a presence as either Carol Channing or Gwen Verdon. Like those performers, she knows exactly what her strengths are, and exactly how to exploit them to maximum effect. She’s a curious creature — imagine if scientists crossbred Reese Witherspoon with a smurf — and like Ms. Witherspoon, whose brisk perkiness she undoubtedly shares, there is occasionally something a little self-congratulatory in the way she twinkles and beams to up the adorability quotient and denote how cute she knows she is. That quality, however, is just right for The Apple Tree, which sends up the diva theatric while at the same time holding it up for winking glorification. Chenoweth’s timing is, to borrow the title of previous stage hit, wicked, and her talent for slapstick is just as finely honed. Whether she’s gawking in giddy delight at the wonders of Eden, cracking the whip as a royal man-eater imperious and bitchy enough to make Joan Collins cower, goofing it up as a dumpy chimneysweep with Coke-bottle glasses and a bad haircut, or sashaying around the stage while marveling at her proportions as the voluptuous bombshell, she nails her target with laser-like precision each and every time.

As Mr. Copeland is fond to say of certain actors and performances, a little of Ms. Chenoweth does indeed go a long way. Happily basking in the light of her own comic ingenuity, she might be a bit too much to take if her co-stars weren’t able to measure up to her standard. When I first saw this version of The Apple Tree in an Encores! concert staging at The City Center in 2005, she dominated the evening a little too effortlessly, all but blowing the ingratiating Malcolm Gets and a rather colorless Michael Cerveris off the stage. Fortunately, the re-casting of the two major male players restores a sense of balance to the proceedings, and makes for a much more satisfying menage-a-trois. Brian D’Arcy James scores a personal triumph in the Alda roles, demonstrating a comic versatility which make his Fall 2007 assignment — slipping into Gene Wilder’s mad scientist garb in the Mel Brooks’ Young Frankenstein — a tantalizing prospect. He brings an unaffected everyman charm to his performance as Adam, re-imagining him as somewhat fatuous Average Joe whose pride is wounded easily each time Eve’s savvy shows him up. His earthiness nicely complements Chenoweth’s empyreal pixie quality, and the sincerity he brings to his final scene provides the evening with its one truly moving moment. As the barbarian warrior in "The Lady and the Tiger" sequence, he does a devastatingly dead-on impression of Charlton Heston, and his posturing folk-rocker in "Passionella," sort of a cross between Bob Dylan and Elvis Presley, becomes a deliriously funny riff on Bono (as D’Arcy James demonstrated in The Lieutenant of Inishmore, an Irish accent is right in his wheelhouse).

The physical and vocal attributes of Marc Kudisch, the barrel-chested baritone who’s been a Broadway mainstay for much of the past decade, would logically render him ideally qualified for the role of a traditional leading man in the Alfred Drake mold — a path favored by Brian Stokes Mitchell, who seems to have cornered the market of late. In a surprising move that has yielded vastly satisfying dividends, Kudisch has instead transformed himself into one of the musical theater’s most indispensable character actors, and the go-to guy for parts that call for an element of mischievous decadence. With a talent for mugging that belies his stolidly handsome features, he mines his roguish charm to wonderfully self-parodying effect, and the evening’s most seemingly thankless roles for comic gold. Special mention need be made of his show-stopping first act solo as a gleaming Mephistopheles in a snakeskin suit entreating Eve to sample the apples — common sense dictates that a Herculean effort would be needed to upstage Ms. Chenoweth, even however briefly, but Mr. Kudisch pulls it off with such slippery ease and showboating aplomb that he makes the audience his gleeful co-conspirators in serpentine lechery.

The staging of the show is relatively modest by Broadway standards — but then, the element of spectacle is provided by the vast resources of its performers, who make the material seem much better than it probably is. As for the inevitable question — how did I like them apples? — I would have to say much, much more than I ever could have anticipated. If these forbidden fruits may not seem quite as fresh as they did back in 1966, they nevertheless make for a tasty evening of theatergoing … and performances this good can still keep the doctor away.

Comments:
I love your site. I want to come back again and again. Please come and leave a comment on my site....cos that i how i come back to the sites i love (so that i have a link to yours).
I had an oscar birthday party a few years ago cos my birthday fell on the Oscars. I went to a gourmet cooking school and got them to make a Cake with an Oscar on top....and cookies that were the shape of something from my theme movie....and got people to dress as their fav. character from that year's nominations.
Leave a message on my site 'From one wannabe runaway to another'. There is a music video there that might touch your heart. I am not singing of course.

Chenoweth is someone who seems like she can do it all. She was even good in the execrable Deck the Halls. You're a lucky man to have seen her live.

I got to see her twice -- in her breakout role in Charlie Brown, in which she basically stole the show (with some help from Roger Bart's Snoopy) and in her Broadway debut in Steel Pier, where her somewhat villainous turn was unlike anything she's done since.