She lives the life 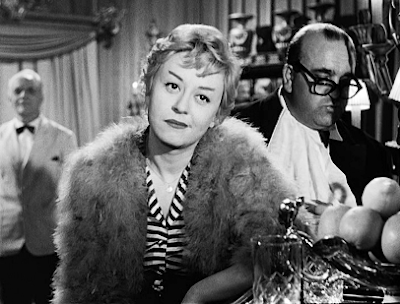 By Edward Copeland
When we first see Cabiria, she's running through a patch of rough weeds, clothed in a striped dress that makes her resemble an escaping prisoner. On one level, she is: Her life as a prostitute in post-war Italy has made her a prisoner, but while Giulietta Masina's remarkable performance might break your heart at times, more often than not, she'll leave you smiling, even if it's a sad smile. Today marks the 50th anniversary of Nights of Cabiria, one of Federico Fellini's very best films, opening in the U.S. 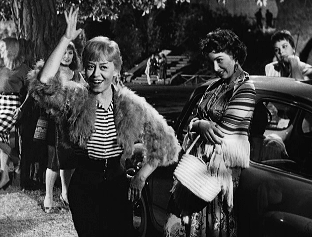 Even though Nights of Cabiria barely missed my Top 100 list when I made it earlier this year, after re-watching it, I do think this film has surpassed 8 1/2 as my favorite Fellini. Cabiria also is the only Fellini film I've been fortunate enough to see projected in a theater, seeing it for the first time on the occasion of its 40th anniversary at the Lincoln Plaza theater in Manhattan. Upon first viewing, Masina was the revelation and while she remains the key to the film, on later viewings I've found the film itself richer than I thought. It's constructed almost as a perfect circle, a ring of hell if you will, from which Cabiria would like to escape. Masina's Cabiria is a spitfire: just as prone to breaking out in dance as to be ready to fight, proud that she owns her own home when many of her fellow denizens of the streets actually live on them. 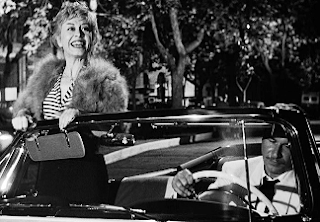 "Everyone has a secret agony," a character tells her at one point and as much as Cabiria might try to avoid it, she hopes to abandon her life. First, she sees fun in a brief sojourn with a celebrated movie star (Amedeo Narrazi) that in a way predicts the storyline of Pretty Woman some 30 years down the road, though without the manufactured happy ending. Nights of Cabiria is grounded in reality: Where the poor are forced to live in caves and anyone can be a victim. Another time, a man courting Cabiria tells her that, "Some things cannot be touched by human vulgarity," referring to her. As hardened as Cabiria is, she's a sucker for it and the eventual realization that once again she's been gypped leads to an ending that manages to be touching, magical and inspiring, all at the same time, ending with one of film's greatest close-ups, which I thought about using for the recent Close-Up Blog-a-Thon at The House Next Door, but I had to save this shot for here. 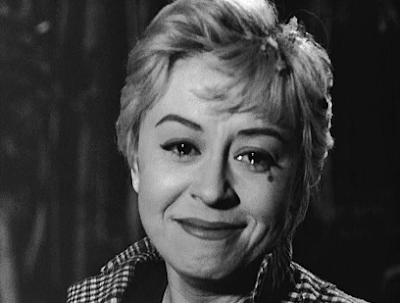 Comments:
I only saw this for the second time not very long ago and, like you, I was struck by how rich, detailed and evocative the movie is beyond Masina's (remarkable, extraordinary) performance. It's not only one of Fellini's best films, it's one of the best films, period.

Great movie, though I still prefer 8-1/2 and Amarcord over this as far as Fellini's concerned. Interestingly enough, both 8-1/2 and this were made into Broadway musicals.