"I'm a sucker for lists like these, and this one helped reinvigorate my passion for film, not to mention start me on a big foreign film kick."
zman 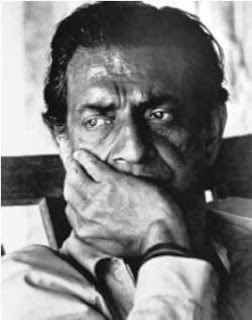 By Edward Copeland
After nearly two months of preparation, the time has come to officially unveil the choice for the list which I've elected to give the title of The Satyajit Ray Memorial Anything-But-Definitive List of Non-English Language Films. The name comes, of course, from the great Indian director who failed to land any of his acclaimed works on the final list of 122 nominees. Yes, I said 122. Originally, we thought it was 121, but we discovered an accounting error (thankfully on the first day of voting) where I had accidentally neglected to list Woman in the Dunes, which appeared on the requisite three nominating ballots to merit inclusion. I only had a handful of ballots in then, so I was able to contact all those who had voted already and gave them the opportunity to revise their lists if they so chose. Then, I thought I had accidentally miscounted the very first number and the total was 123. The other extra film wasn't actually an addition at all: Never let a journalist do math (he said ironically before revealing his calculations of points for the final list). If you'd like to skip ahead to the list of the 22 also-rans or the top 100, click on these links. If you'd like to read more of my thoughts on the process, continue reading. I ended up not getting to see 32 of the eligible films.

This enterprise has been quite illuminating. I've tried to see as many of the eligible films that I hadn't seen yet before I cast my own ballot. I've written about many of them, though others I saw I ran out of time, energy or inclination to post about. I liked Carl Theodor Dreyer's Ordet a lot, but I simply ran out of time to write anything on it. I saw two by Robert Bresson. I liked Au Hasard Balthazar a lot, but I didn't have much to say about it (though I did plan to title the post "Jackass the Art Movie"). Pickpocket also was OK, but more than anything else it made me want to watch Sam Fuller's Pickup on South Street again.

I also liked Ozu's Late Spring. I enjoyed Wong Kar-wai's Chungking Express and since I also liked 2046 when I saw it, so I wonder if I should give In the Mood for Love a second chance.

Playtime was interesting, but far too long I thought. I don't know why there ever was any debate about whether it was a sound or silent film. It is full of sound effects and subtitled dialogue, even if most of the dialogue is inconsequential.

I got through Part 1 of Andrei Rublev, but then the DVD proved defective. I'd been bored so far, so I didn't pursue another copy to finish watching it.

Finally, thanks to a friend I got to see Celine and Julie Go Boating and I wish I had a positive reaction to report about it. At more than three hours in length with hardly any point that I could find in its odd whimsy, it was a long, hard slog for me to get through it. It played like an extremely long episode of Laverne & Shirley, only minus the solid narrative or depth.

Though I haven't been able to see it, I suspect that The Great Silence shouldn't have been eligible under the same reasoning that disqualified Sergio Leone's spaghetti Western trilogy, but by the time I was certain, I figured it wouldn't seem right to suddenly throw it out of the running.

If you missed the original post that explained how we whittled down to these 122 films, click here.

Comments:
Hey Edward: Kudos for all your work with this list. While I did not vote for The Great Silence I would still have included the film because, unlike Leone's films which had English language stars, was topped by the French Jean-Louis Trintignant and the German Klaus Kinski.

Holy Ozu! Submit my list a mere few hours before the deadline, and end up getting quoted in the intro. Again Edward, huge thanks for all the work you've put into this list, and all the joy it's brought me and my fellow cinephiles. After reading the (wonderfully put together) final list of 100... ohhhh, so many I want to see again...

Great list, Edward. I'm part of an independent film society, and we did our Top 100 foreign language films a few years ago. It's pretty interesting to compare. Lots of similar films, but in very different positions. Given the nature of our group (a combination of avid film buffs and those wanting to learn more about indie and international film) we have a lot more recent films on the list. You can find it here: http://www.chlotrudis.org/favorite/foreign.html.

no passion of joan of arc!
wow

There's nothing quite like a "top whatever" film list. I find myself looking down the list and being glad that so many of those films made it. And I wonder at the placement of some, and the absence of others. I find the greatest value of these kinds of lists, apart from reminding me of some films I still need to see, is they provide a kind of temperature reading of our tastes today, and maybe highlight just a bit the inertia and weight of film history. Great job. Thanks for doing this.