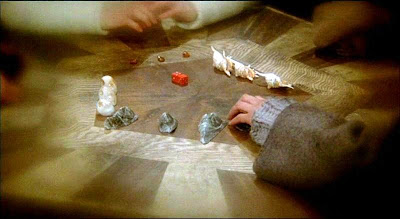 By Edward Copeland
What the fuck was that? After finally having seen one of Robert Altman's other lesser-known films, only that reaction seems apt in writing about Quintet, certainly the most bizarre concoction Altman ever brought to the screen. Set in an unspecified place in an indeterminate time, Quintet stars Paul Newman. I wish I could expand much beyond that other than to mention his co-stars include Bibi Andersson, Vittorio Gassman and Fernando Rey. It's set in some barren, icy wasteland — is it earth? Is it ancient? Is it the future? Who the hell knows?

The film takes its title from some inexplicable game involving strange tokens, a board and killing the other players when they land on the wrong spot — I think. The slogan on the film's poster says, "One man against the world." Not sure that adds to any understanding of this tedious, oblique exercise in audience torture. This film truly mystifies. 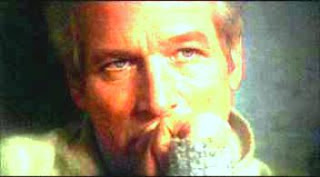 You can't categorize it as one of Altman's flawed but interesting outings such as A Perfect Couple or even as a complete boondoggle such as Ready to Wear — Quintet stands alone in the Altman filmography as something that defies description. It's pretentious and pointless. Occasionally, some characters speak platitudes about how the game Quintet symbolizes life and other mumbo jumbo that makes me speculate that the film was conceived under the influence of many illegal substances. How they got Newman to sign on is beyond me. None of the roles offer anything for a performer to sink their acting chops into. In a way, it resembles most closely those putrid, pompous perfume ads that used to monopolize TV air time in the 1980s or, even more accurately, spoofs of those commercials — only Quintet doesn't have a drop of humor in it. In the DVD featurette that accompanies the movie, Altman actually seems to take glee at what he brewed, saying he loved the idea of holding an audience captive for two hours, making them curious about what the hell the movie was about. Thankfully through DVD, I had the option of stopping and starting this film — I can't even imagine how many moviegoers must have walked out in 1979.

The film doesn't prompt curiosity about its subject — just about how this meandering mess got made in the first place. The film's editor, Dennis Hill, says in the featurette that he was stymied at times in the editing process since the film was designed to move at such a glacial pace that he had to be careful not to cut things too fast.

Thankfully, even Altman doesn't repeat his usual lines about how good he thinks Quintet is — he must know in his heart what a turkey he created. Then again, he probably doesn't care because the only answer to what the fuck Quintet could be about is that Altman was pulling a two-hour practical joke on moviegoers — only I can't imagine many laughing at the time wasted watching it that will never be restored.

Comments:
I was one of the very few sitting in a San Francisco movie theatre watching this flick when it originally came out. Probably the most numbing film experience I've ever had and the last time I went to an Altman film just because it was an Altman film. Your five words are totally apt. RC

Edward-- I covered a similar experience with Quintet in my contribution to the Altman Blog-a-Thon earlier this year. But I must say, when I saw Quintet most recently, while it still struck me as cripplingly pretentious, it was also far more easily endurable than I found it that rainy Sunday afternoon when I stumbled into an empty Eugene, Oregon theater to see it. I guess I enjoyed hearing Vittorio Gassman and Fernando Rey phonetically stumble over all that god-awful dialogue more this time around. And I love the scene when Gassman and Bibi Andersson contemplate the endgame scenario, all while nonchalantly flanking the skewered corpse of Nina Van Pallandt.

Quintet has held the honor of being my idea of Altman's worst ever since it was released. But the intervening years have made me more tolerant of it, even if it is was intended, as you imply from Altman's appearance in those bonus materials, a colossal put-on. I know you don't agree, but I find Ready to Wear very entertaining, but perhaps only for Altmanheads. And I think Dr. T and the Women is a genuinely good movie. My vote for worst Altman these days would have to go to Short Cuts, which I think is about as full of hubris and condescension and bad ideas as any movie any great director ever made.

I know a lot of people who disagree, but then nobody likes Ready to Wear either. It is nice to see the evidence of a great director at work, however, even in schlock like Quintet. It seems very odd to say so, but in 2006 I enjoyed that movie so much more than Short Cuts, which I hope never to see again-- and that's the only Altman wmovie I can say that about.

Ready to Wear did have some moments, mainly Tim Robbins and Julia Roberts' bits and Stephen Rea. Dr. T I found stypefying, especially with the tornado payoff that seemed too much like it was apign Short Cuts, which I love. I think it's one of the best of his flawed films -- only the Lori Singer-Annie Ross story (the one NOT based on Raymond Carver) seemed predictable and pointless to me and I think he only stuck it in there as an excuse to use Annie Ross' singing.

Yeah, I'd agree about Ross/Singer, for sure. And I did like Ross' boozy seen-it-all delivery of some of those songs ("To Hell With Love"). I'm not a native Angeleno-- in fact, I come from Carver's Northwest-- but I think the single thing that works least for me in Short Cuts is the transposition of Carver from the Northwest to Los Angeles, as if the only (or the main) thing that made Carver worth reading were his plots, and that the locale had no importance in informing or expanding his narratives.

Altman, to my eye, definitely misses the poetry in Carver, but even as a template for his overlapping community style his regard for the elements of the storytelling appear to me unusually sloppy and mean-spirited.

As for Dr. T., the retelling of the story of Job, such as it was, seems a welcome place for such a whimsically strange sort of epilogue. It may have felt more tacked on than the earthquake and explosion of violence that ends Short Cuts, but Dr. T's very lack of a whiff of sour determinism, in comparison to the other film, sold it for me.