Durang me, Durang me, Ought to take a rope and hang me 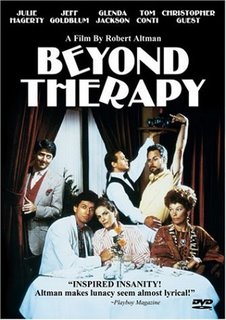 By Edward Copeland
Hang me from the highest tree/Good Lord have pity on me. At least that's how I felt after enduring what takes the title of the absolute worst Robert Altman feature I've ever seen. Altman's 1987 screen adaptation of Beyond Therapy is beyond help — wasting a talented cast that includes Jeff Goldblum, Julie Hagerty, Christopher Guest, Tom Conti and Glenda Jackson in perhaps the worst idea for a play-to-film transfer ever by filming playwright Christopher Durang's equally abysmal play Beyond Therapy to the big screen. Back when the great Frank Rich reviewed theater for The New York Times, he summed up many of the problems with the movie when he reviewed the Broadway transfer of the play in 1981.

"Some day, I swear, the explosive comic brilliance of Christopher Durang will erupt on Broadway. The only question is when. ... (I)t didn't happen last night, when Mr. Durang's latest play, Beyond Therapy, pretty much wilted of its own volition at the Brooks Atkinson."

Both the play and Altman's film allege to be a farce of dysfunctional Manhattanites trying to find love and themselves through personal ads and psychiatry. Goldblum plays Bruce, a bisexual looking to explore hetero life, and Hagerty plays Prudence, a woman "who hates homosexuals" but keeps going back to Bruce anyway. In the middle is Bob, Bruce's gay lover (Guest, developing the prototype for his Corky St. Clair character in Waiting for Guffman) and on the sides are Bruce and Prudence's less-than stellar therapists played by Jackson and Conti, in an awful Italian accent which his character at least admits is a put-on late in the film.
I hate to keep leaning on Rich, but his review of the play said so much that's wrong with Beyond Therapy much better than I ever could.

"It contained some hilarious jokes, uneasily tied to a bland, dramatically amorphous romance ... Yet, for all the hard work, the final result is unchanged. We still don't care whether Bruce ... and Prudence ... ever get married or not. ... At the same time, however, the therapy gags are defeating: like too many jokes in this play, they compromise the credibility of the figures at center stage. ... Mr. Durang's jokey, throw-away rationalizations for this odd courtship provide no enlightenment.
Nor do the other lines fill in the blanks in these people; the playwright never summons up the passion for his leads that he does for their doctors. We're repeatedly told that Bruce must learn to take emotional risks, that Prudence must learn to accept people's imperfections. Both characters are apparently lonely and want children. And that's it. Otherwise, this is a colorless, if whiny, pair who keep coming together and splitting apart as aimlessly as billiard balls.
They remain empty, anonymous vessels for arbitrary one-liners.
Yet the real disappointment in "Beyond Therapy" is the script...

Even though Altman pitched in with Durang for the screenplay, no evidence that it helped appears on the screen. The most positive things I can say about Beyond Therapy is that it's short. I did chuckle once when Bob blames Bruce's exploration of his straight side on seeing that movie Sunday Bloody Sunday with that "English actress" who is of course Glenda Jackson, already trapped in this movie. 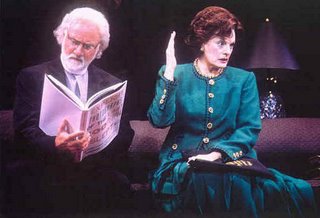 This isn't my first encounter with a wretched work by Durang — I had the misfortune of seeing his play Sex and Longing on Broadway with Sigourney Weaver and it remains the single worst Broadway production I've ever seen. I've not seen Durang's more acclaimed works, but based on these two, my guess is that either he peaked early or that his reputation was overblown to begin with. The only performer to emerge unscathed in Sex and Longing was the great Dana Ivey, who somehow managed a great performance in the slop of a script she was performing, something unfortunately none of the cast of the Beyond Therapy film were able to accomplish. I don't know what attracted Altman to film this piece of dreck, but I do think it's telling that it's one of the few DVDs of an Altman feature that contains neither a commentary track by the director nor a featurette where he talks about the film. Maybe Altman knows it's better to let this one slip away. Now that I've seen it, I'm inclined to agree. I guess I really have been too hard on Quintet, Ready to Wear and Dr. T. and the Women.

Comments:
Sister Mary Ignatius Explains It All For You is one of the most hysterical plays ever written - anyone who has the opportunity to see it onstage should do so - or better yet, read it (avoid the abyssmal Diane Keaton film version at all costs). Nothing Durang has written since has ever really matched it, although Baby with the Bathwater (which helped launch the career of William H. Macy long before he hooked up with a guy named Mamet) has undeniable moments. For Whom the Southern Belle Tolls, a devestating one-act parody of The Glass Menagerie, is also very funny, although it plays more like an especially clever SNL skit than a legitimate theater piece. Those are the only Durang pieces I've ever cared for, although I don't think you can get a true sense of his worth based on what are, by common consensus, the two worst things he's ever done. He has fierce partisans (there's a cult surrounding him - comprised mostly of gay men - in every college drama department), but I think he's one of those writers whose work probably reads better than it plays.

I only saw Beyond Therapy once, and I didn't like it very much - although my understanding, based on what people who are familiar with both the stage and screen versions have told me, is that the Altman film makes it seem much worse than it actually is (apparently there were a lot of revisions made). I've scrupulously avoided it for many, many years.

To clarify, I saw a stage production of Beyond Therapy - not the Altman film.

POPEYE is worse. At least this had moments of inexplicable interest rather than relentless inexplicable boredom.