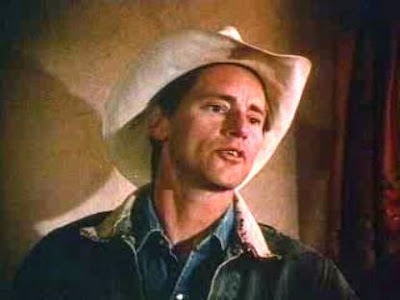 By Edward Copeland
Seinfeld always was classified as a show about "nothing" and for the first hour and 15 minutes, I was prepared to give that label to Robert Altman's film version of Sam Shepard's Fool for Love, minus the consistent laughs. Then, suddenly in the final 30 minutes, the movie comes to life — though it's still unclear what it's about and it's too late to save it.

Based on Shepard's play, in simple terms, Fool for Love concentrates on four characters at a desolate New Mexico motel. There is Eddie (Sam Shepard), a cowboy who seems intent on causing trouble for May, one of the hotel's tenants (Kim Basinger). There also is the old man who runs the motel (Harry Dean Stanton) and Martin (Randy Quaid), who arrives expecting a date with May.

I've enjoyed Shepard's plays, particularly Buried Child and True West, but Fool for Love seems particularly aimless. At one point, as Eddie is trying to finish a story about him and May (which may or may not be true), May accuses him of repeating himself. Eddie insists he never repeats himself, but May begs to differ, saying he always goes around in circles, never getting anywhere.

That's pretty much how the movie works, spinning forward without any sense of direction. May asks Eddie what the point of his story is and Eddie even admits it's pointless.

Fool for Love came out in 1985, when Altman was in a cycle of filming plays for both film and television. I haven't seen Come Back to the Five and Dime, Jimmy Dean, Jimmy Dean or his network production of The Caine Mutiny Court-Martial, but Fool for Love certainly pales next to Streamers, Secret Honor and The Laundromat for HBO.

Shepard, Stanton and Quaid are all good, but Basinger struggles mightily with her southwestern accent.

In a note on the DVD, Altman tells viewers he always was puzzled by people's reaction to stage versions of Fool for Love, asking if they saw the same play he saw. The movie begs the question what exactly it was that Altman saw.

The last half hour has its moments, but it's slowgoing getting there and the final product really doesn't add up to much.