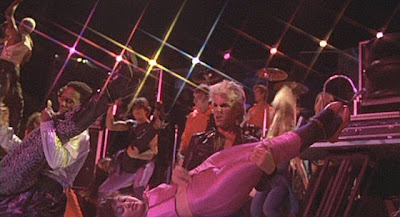 By Edward Copeland
Don't ever let it be said that Robert Altman doesn't like to take chances. Seeing his 1979 film A Perfect Couple for the first time, I'm reminded once again how much this master filmmaker likes to shake things up and did shake things up, especially in the 1970s phase of his career. Even when he misses, he always seems to offer something to contemplate or admire.

A Perfect Couple doesn't approach his greatest works and, if pushed to make a call on it, I'm not sure I could recommend it. Still, something about this lesser-known Altman lingers on the cinematic palate and makes you think about giving it a second chance, something that certainly can't be said about his real misfires such as Ready to Wear or Dr. T and the Women. 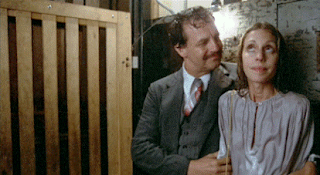 Spawned during the making of 1978's A Wedding and filmed after Quintet, A Perfect Couple is an odd little film, part musical, part unconventional romantic comedy. The film stars Paul Dooley, sporting a mustache as the middle-age, never-wed son of a strangely tight-knit Greek family who turns to computer dating to find romance, ending up on a date with Marta Heflin, a member of her own strange, extended family, in this case a folk-rock group called Keepin' 'em Off the Streets, led by a singer played by Ted Neeley, best known for his title role in the film version of Jesus Christ Superstar. That's pretty much all there is to A Perfect Couple — a loose collection of scenes detailing the bumpy dating road Dooley and Heflin encounter surrounded by ample musical performances.

In a feature on the DVD, Altman explains the origin of the film, which began when his longtime assistant director and frequent actor Allan Nichols put together a makeshift band made up mostly of out-of-work New York actors. While making A Wedding, which also featured Dooley and Heflin, Altman toyed with the idea of making a concert film of the band before he was struck by the idea of making Dooley and Heflin a couple in another film.

The funniest detail in the DVD feature is that Dooley didn't even know that Altman had this role and movie in mind for him until he read an ad in Variety announcing that he was going to star in this Altman project. You have to be a ballsy filmmaker who earns the respect and loyalty of his actors to pull a stunt like that and get away with it, and A Perfect Couple brings back many Altman regulars, such as Henry Gibson (The Long Goodbye, Nashville, HealtH), Belita Moreno (3 Women, A Wedding), Ann Ryerson (A Wedding, HealtH) and Dennis Franz (A Wedding, Popeye).

Tony Berg, who is one of the guitarists in Keepin' 'em Off the Streets, points out in the DVD feature the constant in nearly all of Altman's works: nothing and no one is ever quite what they seem. That's certainly the case with A Perfect Couple, that glides along on its own meandering path, letting the audience connect the dots (if there are any to connect at all, plots be damned). Altman says he considers this as good a movie as he's ever made, but I swear I've heard him say that about almost every one of his films, especially the lesser ones.

When I interviewed him for Ready to Wear, he said he considers all his films his children and so he has a tendency to love the failures the most because they need it. I wouldn't label A Perfect Couple a failure but it's far from a success. However, it is downright watchable and intriguing, which is more than you can say for most movies these days.

Comments:
i don't know about you, but i like the idea of directors who take some chances.

Definitely, even if they end up missing the mark.

I need to see this one. The new DVD is tempting, but I keep getting this sneaking suspicion that an Altman retro of some size might make its way into town sometime soon.

Has it ever been said that Altman doesn't like to take chances? I've just rewatched The Long Goodbye and Eliot Gould as Marlowe is a chance taken that pays off for me. I particularly like his under the breath mumbling, which reminds me of very early Popeye cartoons. Also, Jim Bouton appeals to my love of non-actors underplaying their way through parts (the epitome of which,to me, is James Taylor and Dennis Wilson in Two Lane Blacktop). Another early 70's Altman chance-taking favorite is Images.

I wasn't crazy about Images, but I do love The Long Goodbye.

I also tentatively somewhat like this one. There are some problems with it, not least of which is the fact that all the music that plays such a big role in it is absolutely painful to listen to, and all those interminable performance scenes become an exercise in endurance for anyone with the least musical taste. The other problem I have is the film's failure to really develop its impressive supporting cast, which is in many ways so much more interesting than the central couple's love story. Dooley's family, in particular, provide some of the film's best deadpan laughs, and I really can't help but wish that they were on-screen a lot more and given a lot more to do. The hippie clan Heflin hangs with isn't quite as interesting or unique, but some more fleshing out of them (as opposed to singing) might have done the movie well too.

That said, there's still enough good stuff here to make the film worth seeing. And hell, most Altman is at least worth seeing even if it's not entirely successful. There are some good gags too, like the recurring appearance of the more traditional suave, sexy couple who show up on the sidelines of the Dooley/Heflin story, thus reversing the usual hierarchy of Hollywood romances.

I would also put Images in the not-entirely-successful category, but it's certainly another very interesting film, and much more accomplished than A Perfect Couple. In that case, the concept is perfectly executed, and the technical aspects of the woman's hallucinations is beautifully done, it's just that there's a subtle something missing from the film; maybe just that it's a bit colder, more distant from its characters than most Altman films.