"Life is an excruciating experience
— and love is worse" 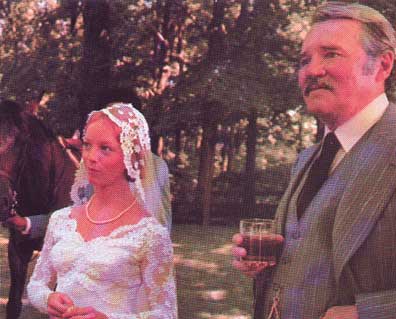 By Edward Copeland
When I first accepted an invitation to Robert Altman's A Wedding, I was in the thrall of Nashville and open to loving this work, even though I was watching a faded, cropped VHS version and I knew that the critical consensus was that it was a misfire, but I fell in love with its loopy energy and its ensemble cast that doubled the number of characters in my beloved Nashville anyway. With the recent release of a DVD version, I thought it was high time to go back to A Wedding to see what I thought after many years. I still like the movie, but I think I went overboard with my praise for it at the time, though it is great to see it widescreen the way God intended.

The problem I'd always had with the movie seemed even more apparent upon re-visiting. Unlike Altman's other ensemble masterpieces like Nashville and Short Cuts, A Wedding comes up far short in the character department, with too many caricatures and, yes, too many characters for a viewer to really latch on to.

To be sure, there are good performances — Ruth Nelson as a socialist aunt, Pat McCormack as a lovestruck puppy dog of a husband, John Cromwell — better known as a director and as the father of James Cromwell — as the befuddled bishop. Then there is the luminous Lillian Gish, who manages to upstage most everyone, even though after about 20 minutes, her part consists of lying in a bed dead.

In a short documentary on the DVD, Altman admits that the whole production of the film came from a joke. A reporter asked him what he planned to do next and he jokingly said that he was just going to film someone's wedding, since that was becoming a more common thing to do at the time. As he reflected on it, he decided that would be a good idea — since he'd never gone to a wedding where something didn't go wrong.

I'm sure there is a great movie to be made from the concept of a wedding, but rewatching Altman's take, the one thing it seems to really lack is direction or point of view. It's purely a comedy — and there are some spectacular comic highlights — but for the life of me, I don't see what Altman was aiming for here.

The closest I could come up with is the idea that no one and nothing is ever what it appears to be, but at some point, particularly with the "tragic" twist toward the end, it just seems like changeups for the sake of changeups. Even though the return trip to A Wedding was a disappointment for me, I'd still take it over any of Altman's other misfires such as Ready to Wear or Dr. T. and the Women any day, if only to spend time with Howard Duff's boozy, unflappable family physician once again.

By the way, if you were wondering where I took the quote for the title of the post, that to me was one of the most memorable lines from the movie, delivered by the head-over-heels McCormack to Carol Burnett's mother of the bride.

Comments:
Edward: I have somewhat the same history with A Wedding as you do-- I overpraised it when it came out because I was so hoping that Altman could regain the momentum of Nashville and rechannel it into a double-your-pleasure 48-character party. But upon seeing the movie again several times over the past 20 years, I found it unpleasant and sour, with, as you observed, damn little point or point of view. And it seems a little too mean-spirited too, scoring easy points off of, as you rightly put it, caricatures in whom we have little invested, rather than make the peccadilos and turns of fate sting with real pain because we understand these characters as, on some level, real people. And after seeing it again while working on the recently released DVD, I've come to the conclusion that, despite a wonderful turn by Nina Van Pallandt as the stoned mother of the groom, and Vittorio Gassman as her long-suffering husband, who speaks faster than any human Ive ever heard before, it's the rare Altman movie that I don't care if I ever see again. I think Dr. T. is a far more genuine and interesting and funny movie and (I know this is heresy) I get a kick out of Pret-a-Porter too-- I'd much rather see either of them again. The one I'm most interested in revisiting out of the new Altman DVD box set, whcih I haven't seen in almost 30 years, is A Perfect Couple. I'm hoping that one is better than I remember too-- it wasn't bad, just kind of bland, as I recall.

I've got the DVDS of A Perfect Couple and Quintet, but haven't watched either yet -- and those I'll be watching for the first time.