From the Vault: Three Colors: Red 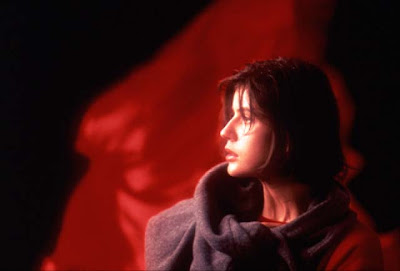 With the welcome arrival of Red to a local theater comes an unusual situation. Red, the final installment of director Krzysztof Kieslowski's "Three Colors" trilogy comes here even though neither of the other two parts, Blue and White, ever played theatrically here.

Even though each film stands on its own as a separate unit, the final denouement of Red doesn't pack as much of a kick without having seen the previous two.

Thankfully, Blue and White are both available here on video. However, Red, with or without the other two, towers above the previous films as well as most other 1994 releases. Savor the chance to see Kieslowski's masterpiece the way it should be seen, especially if the director keeps his promise to cease making films.

My first exposure to Kieslowski's work came with 1991's The Double Life of Veronique, which offered little more than the enchanting presence of Swiss actress Irene Jacob, who reunites with Kieslowski for Red.

With the "Three Colors" trilogy, Kieslowski (with the input of co-writer Kryzstof Piesiewicz) shows why he can be considered one of the masters of current cinema, a melancholy realization due to his self-imposed retirement.

Red wraps up the trilogy, which was based upon the colors and ideals behind the flag of the Polish Kieslowski's adopted country of France. Blue examined unexpected liberty from a tragic loss and White probed equality through a man's revenge on the ex-wife who stole everything from him.

Fraternity lies behind Red and this brotherhood comes in the unexpected relationship between a young student (Jacob) and a retired judge (Jean-Louis Trintignant) she meets when she accidentally strikes his dog with her car. Of the three films in the trilogy, Red proves least dependent on plot, which is interesting since the films that enchant me most these days are the ones whose stories I can't predict.

Red is a rarity — a film where ideas and reflection take more prominence than characters and situation without sacrificing the viewer's interest in the process. Though Red has brief slow passages, Kieslowski's fluid camera and emotional content transfix.

Jacob enchants as much as she did in Veronique only this time a compelling script and other solid performances help her out.

Veteran actor Trintignant manages to make the cold, bitter judge into one of the most sympathetic characters.

Red need not be described much beyond its general ideas about paths not taken and intersecting lives, about loves that shouldn't be pursued and ones that should. Needless to say, for the discerning moviegoer, Red provides a memorable and thought-provoking experience.