From the Vault: The Scarlet Letter 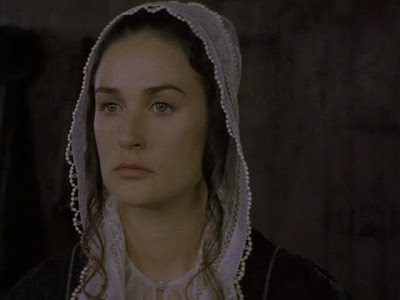 The "A" on Hester Prynne's chest stands for adultery but in the case of The Scarlet Letter it means adapted or, as the opening credits say, "freely adapted" from the classic novel by Nathaniel Hawthorne. The on-screen admission that what follows bears little resemblance to Hawthorne's text prompts the biggest laugh and one of the last points of interest before this dull and belabored movie shuffles slowly toward its new but hardly improved ending.

Demi Moore stars as Hester, who arrives in America to prepare things for her husband before both settle in the Puritan colonies. Before too long, Hester encounters the young and charming Rev. Arthur Dimmesdale (Gary Oldman). Neither masks their mutual attraction easily, something they abandon even attempting when Hester's husband is presumed dead.

What's odd about The Scarlet Letter goes beyond its lack of resemblance to the novel (It should carry a disclaimer that the names have not been changed to protect the fictional), but it still feels as if it's a Cliff Note version of a story.

It seems as if Hester and Arthur only have met once before they declare their undying love and the actual placement of the "A" on Hester's clothes doesn't come until well into the movie and plays like an afterthought. When Hester tosses the letter into the dirt at the end, the audience hasn't seen her suffer much from having to wear it in the first place.

Hawthorne purists shouldn't even bother seeing this atrocity. For others hoping to see another seemingly pro-adultery romance such as The Bridges of Madison County, it's not in that league either. Of the talented actors stuck in this muck, none suffers more than poor Robert Duvall as Roger Prynne, who goes nuts and in one sequence is forced to wallow naked in mud with antlers on his head.

On the plus side, Joan Plowright gives a fun performance as Harriet Hibbons, a composite of several characters from the book, and Alex Thomson contributes nice cinematography.

In the end, the most ironic thing about The Scarlet Letter is that it exemplifies the satirical ending of The Player where Moore's real-life husband Bruce Willis helped make that film's point about Hollywood filmmaking.