From the Vault: Say Anything 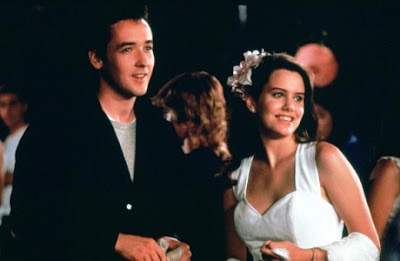 Say Anything depicts a rarity in teenage films — intelligence, wit, honesty and truth. Cameron Crowe, who wrote Fast Times at Ridgemont High and The Wild Life, makes his directing debut from his own screenplay. For the first time, he's involved in a film truly worthy of his ear for realistic dialogue.

Say Anything tells the story of Lloyd Dobler (John Cusack), a graduating high school senior infatuated with Diane Court (Ione Skye), the attractive class valedictorian, who seems to distance herself from her classmates.

What separates this movie from most other teen flicks is the other central character: Diane's father (John Mahoney), a single dad who runs a nursing home and has pushed and prodded Diane all her life with love and encouragement to reach academic heights. His pride in his daughter notwithstanding, Mahoney's character doesn't fit into easy stereotypes as hero or villain — he's complicated. In fact, his relationship with Skye raises this film above the level of other movies in this genre by presenting a three-dimensional portrait of a parent that you seldom see in teen films.

Skye's character also provides a refreshing change of pace. She's brainy, but not a nerd, beautiful, but not popular — and she still fears for her future. Cusack can almost single-handedly take credit for saving this genre through his solid work here and in The Sure Thing and his brief role in Sixteen Candles as well.

Crowe's directing debut impresses, though some sequences slow the film. The supporting players stand out as well including Cusack's real-life sister Joan as Lloyd's sister and Lili Taylor and Amy Brooks as Lloyd's confidants.

Say Anything's fresh and moving approach hits its target. In fact, it might be the most accurate account of teens and their relationships yet put on film.