From the Vault: Robert Altman 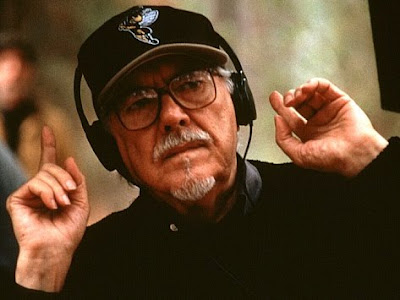 NEW YORK (December 1994) — Loose structures and large casts are two things that immediately come to mind when director Robert Altman's name comes up. Both of those attributes are obvious in Altman's latest movie party, Ready to Wear, a light farce set during the Paris Pret-a-Porter fashion shows. The idea for Ready to Wear came to Altman when his wife dragged him unwillingly to one of the Paris showings about 10 years ago. It was originally titled Pret-a-Porter until it was decided that the English translation would come out of Americans mouths easier.

"I guess it's always when you dread something ... I was just surprised by it. It was like a circus. I just couldn't believe that nobody had used that, had made a film of that milieu. I found out why. It's very difficult. I spent 10 years trying to find out what kind (of film to make) and it ended up as you've seen it — a farce, essay material."

In fact, Altman is quite insistent that viewers realize the light nature of this work and not to expect something along the lines of his masterpieces Nashville or Short Cuts or even a brilliant satiric thriller such as The Player.

"A lot of attention is coming off of The Player. This thing was started in my mind eight years before I even thought of The Player. I wasn't trying to re-create The Player. It's not that type of a film. I think it's a very soft kind of farce."

The director, who co-wrote the script with Barbara Shulgasser, even told an audience prior to a recent screening of Ready to Wear that this wasn't a "serious" movie. In Ready to Wear the cast of main characters numbers about 31, a number that not only indicates Altman's love of ensembles but of his inability to turn down practically any performer who expresses interest in working with him.

"We did the script and at the same time, we cast people when I didn't have them in the script. I remember somebody told me, 'Tracey Ullman would sure love to play in a movie with you' and I said, 'Oh, great.' I had no idea what I was going to put her in."

Ullman ended up in the role of Nina Scant, the fictional editor of the British version of Vogue magazine, sparring with rival editors played by Linda Hunt and Sally Kellerman. Her casting was by no means a unique occurrence.

"Stephen Rea was kind of the same way. I didn't have that plot stuff worked out for him for a long time and I was quite worried that there wouldn't be enough for him to do. Sometimes you create the characters to fit the people you feel go into the ensemble and make it good, and some times you just fill the part."

That casting style contributed to a somewhat chaotic production, though Altman questions whether it was the most out-of-control set he's worked on.

"I'd say yes (that Ready to Wear was the film he felt least in control of while making), but if you could push me back in time to Nashville or some of the others I'd probably say no. Pain doesn't have any memory. You just remember that you didn't like it, but you don't experience the feeling of it."

However, Altman has no regrets and is quite proud of the finished product.

"I'm not prone to ulcers, thank God, but this was very tough. If we'd written this meticulously and tried to get everybody to stick to their lines, it would have been a stiff disaster. Ultimately, it always ends up in the hands of the performers."

"We had some very set pieces. The structure of Julia Roberts and Tim Robbins — that was a little short story that was fairly concise. Somebody like Tracey Ullman I can kind of turn loose on her own and know that if I can use two out of every 10 gags she comes up with that I'll be all right. Stephen Rea ... really thinks out his part and is consistent with it, and that grew into a very terrific character."

Making his third consecutive appearance in an Altman film is singer-songwriter Lyle Lovett, who plays a Texas boot mogul. Lovett does not appear on screen with Roberts, his real-life wife.

"I told Lyle, 'I want to waste you in this film. I want you to be like the leading man used to be in Flying Down to Rio and all those pictures.' There was always some guy who really was a nebbish. He was always the rich guy who was there, but really had nothing to do. I told him that I was looking for bad acting or nonacting. He was very courageous to tackle it and he did it well."

Altman believes one of the most desirable by-products of his ensemble technique is the soothing of actorly egos.

"Sophia, Marcello, Julia and Teri Garr are four of the easiest actors, the most creative actors I've ever worked with. That's not to say the others were difficult, but they do get concerned about themselves. Those four people I mentioned though, when I looked on the schedule and that's who I had that day, then I had a nice day ahead of me."

While Altman is well aware that Ready to Wear is unlikely to repeat the overwhelming critical kudos of The Player and Short Cuts, his last two films which heralded his umpteenth "comeback," the director still stands behind the work.

"I think it's a lot better film than anyone will discover until about a month after it's opened and played," Altman said. "I find that all of these films are like your children and you tend to love your least successful children the most, but they're finished and the cord's cut and it's out there and it ... doesn't belong to me anymore."