From the Vault: Ready to Wear 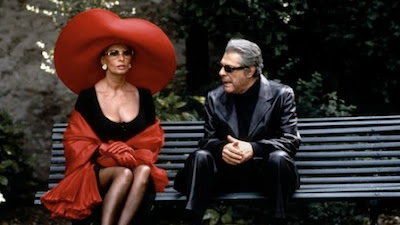 Whenever a favorite artist stumbles, it's tempting to rationalize why the latest project is a misfire in order to cast the work in the best light possible. Unfortunately, that's difficult to do when one of the all-time great filmmakers Robert Altman produces a film as forgettable as Ready to Wear.

Formerly titled Pret-a-Porter (which is the French translation of the title), Ready to Wear is an aimless farce set amid the world of Paris fashion shows.

Though commercial viewers are being misled to think Ready to Wear is a murder mystery, it is actually neither.

There are many amusing moments in the film, co-written by Altman and Barbara Shulgasser, but what's most surprising is its occasionally leaden pace and its generic nature. Except for one brilliant scene near the end, Ready to Wear offers little in the way of characters or point-of-view. The crowning set piece is a good one, but nothing before it supports its statement.

Some of the many performers in the ensemble do provide nice moments, especially Stephen Rea as a star photographer and Linda Hunt, Sally Kellerman and Tracey Ullman as three magazine editors competing for his services.

Marcello Mastroianni also manages some cute bits and his daughter, Chiara Mastroianni, shows real promise and presence with her role as assistant to a vacuous TV reporter (Kim Basinger).

The rest of the cast is set adrift in ill-defined caricatures and underdeveloped purposes, aside from Julia Roberts and Tim Robbins whose characters seem as if they are in a completely different movie, a potentially more interesting one.

With the recurring theme of people stepping in dog droppings and Basinger's final commentary, you might suspect that Altman has purposely set out to make an unsuccessful film, almost as a response to two years of comeback stories following his back-to-back home runs, The Player and Short Cuts.

Perhaps with its focus on the media, Ready to Wear is really a test for critics and entertainment journalists, to see if they'd follow Altman off any bridge. Unfortunately, this time it's better to stay on safe ground.