From the Vault: Homicide 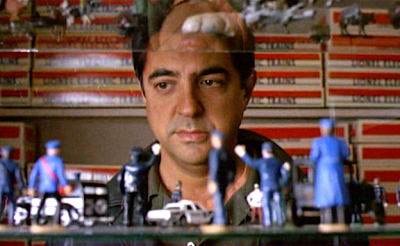 With his third time out as writer and director, David Mamet crafts an eloquent and entertaining film that outdistances most movies released so far this year.

Homicide stars Mamet regular Joe Mantegna as Bobby Gold, a New York homicide detective who sees himself as a "garbage man," an attitude stemming not just from his job but from his Jewish self-loathing as well.

In fact, the two cases Gold works in Homicide function as red herrings for the movie's real intent — Gold investigating himself and determining which of his roles come first: American cop or Jew.

Mamet doesn't preach and infuses this highly compelling film with a visceral power and his gift for spinning profanity into poetry. When the swearing comes from Mantegna's lips, it sounds dead on and necessary, unlike so many films where the vulgarities seem to be there for vulgarity's sake. These characters talk like this and to hear them any other way would be dishonest.

Some argue that New York's lack of a middle class begets many of its problems, where residents either are rich or poor with few living in between. Mamet broaches this subject as well by contrasting the two cases Gold find himself investigating.

As the film starts, the FBI has bungled the apprehension of a major drug dealer and decides to dump the case back in the NYPD's lap. Gold and his partner Tim Sullivan (William H. Macy) previously had worked cases involving the fugitive and volunteer to help bring him in. During their investigation, Gold happens upon a second crime, the murder of an elderly Jewish store owner and he finds himself assigned to that case as well, much to his chagrin.

Gold views the string-pulling by the victim's wealthy family as a personal affront and wants to stay on the first case, where he might find glory. The store owner's murder starts to gnaw at Gold, launching his inquiry into hate and his own heritage.

Gold wants to ignore the slaying, but as he becomes more involved in what appears to be a hate crime, his lust for the drug case subsides until, finally, dire results occur on both fronts.

The initial scene with the FBI sets up the film's conflicts perfectly as the detectives only recognize bigotry when it's perpetrated by someone else. Gold feels comfortable hurling epithets about people of his own ethnic background, but he and his Irish partner get up in arms when the black FBI agent uses the same derogatory expression for Jews.

It sounds as if Homicide might be Do the Right Thing from the police point-of-view, but it isn't, though both films are among the best and most provocative works in recent years.

The conflict in Homicide exists basically within Gold himself and after the early scenes, the prejudices battle not individuals or groups but Gold's reassessment of his own loyalties.

Mantegna works well with Mamet, as has been proved both on stage and screen, and his performance here may be the best he's ever given. The supporting cast supports him well, but this is Mantegna's movie, almost a one-man show.

Mamet moves the film along at a good pace, yet he never rushes the audience. He wants to make sure we see what is happening. The police work seems real and the suspense Mamet builds at times makes all the other thrillers this year pale by comparison.

The title implies the aftermath of death, but Homicide really depicts the consequences of confronting life and how one balances different and often conflicting priorities.