From the Vault: Do the Right Thing 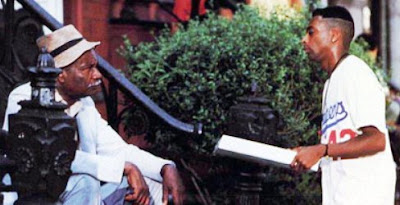 One of the most important, and best, films of 1989 has arrived. It is Do the Right Thing, the controversial film by Spike Lee and the third film he's written, produced, directed and starred in following 1986's She's Gotta Have It and last year's School Daze.

The film tells the story of one day, one very hot summer day, in Bedford-Stuyvesant, New York. Beautifully photographed by Ernest Dickerson, the film takes its time as it introduces us to the neighborhood's characters. There is Sal (Danny Aiello), the Italian man who operates his pizzeria with his sons (John Turturro and Richard Edson). There is Mookie (Lee), their delivery man who has a son by his girlfriend (Rosie Perez). There is Da Mayor (Ossie Davis), a drunk simultaneously afforded respect and ridicule by the neighborhood. There is Smiley (Roger Smith), a man with a speech impediment roaming the streets selling photos of Martin Luther King and Malcolm X. Finally, there is Buggin' Out (Giancarlo Esposito), a man outraged that there are only pictures of Italian Americans on the pizzeria's wall. Buggin' Out demands that some "brothers" be added to the wall and this request, looked on as serious by some, trivial by others, sparks the most serious and powerful essay on race relations in recent memory.

Do the Right Thing is that rarest of movies today — the conversation starter. Everyone might talk about Batman, but they don't debate its message. Lee's film isn't like that. It can't be ignored and it must discussed. I still have a lot of questions about the film. Why did Lee choose to portray Smiley with a stutter? Why is a seemingly sympathetic character driven to commit what appears to be an unnecessary act of violence? Lee doesn't try to fill in the blanks, exemplified by two contradictory quotes by King and Malcolm X that close the film.

The performances are uniformly excellent, with no character portrayed as all good or all bad. In fact, the only character who borders on villainy doesn't even take part in the final violence except in self-defense. Davis gives a wonderful performance as the seldom-sober sage, the only continuous voice of reason in the film. Ruby Dee, Davis' real-life wife, shines as Mother Sister, who watches everything from her window.

Paul Benjamin, Frankie Faison and Robin Harris provide ample comic relief as a trio who sit on a street corner commenting on all the failures and faults of the people around them while their own lives drift on aimlessly. Do the Right Thing shows the work of an artist completely in control of his film environment, an artist confident enough to tackle an important issue and intelligent enough not to try to provide an easy answer.

Comments:
This is definitely a great film, and it captures an all-too-rare phenomenon in today's mainstream films: it is both incredibly entertaining and incredibly smart and deep. All too often, today's "socially conscious" films like Crash and its ilk are drab, aesthetically conservative works that hammer home their message with no subtlety or wit. Lee has infinitely more to say about racism than Haggis, and yet his best films, like this one, are never ponderous or heavy-handed. His light touch, comedic talent, and compassion for even the film's racist characters is impressive.