From the Vault: Do the Right Thing, a second look 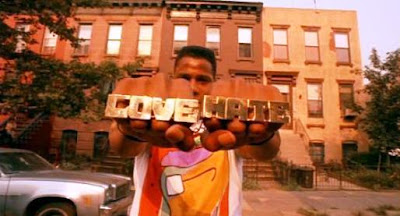 Few films cause widespread debate. The Last Temptation of Christ did last year. This year, it's Do the Right Thing's turn. The films that garner this much analytical press are very few. Most movies don't merit discussions on Crossfire or Nightline, but Spike Lee's film achieves this. Do the Right Thing deserves this debate, not because of an inherent danger to society that some people see, but because its subject matter demands the discussion and a second review.

I've seen the film twice now and without a doubt it's the best yet released in 1989. A lot has been written about the film's depiction of race relations in Bedford-Stuyvesant, New York. That's important and gives the film its punch, but I want to discuss the sheer artistry.

The ensemble cast Lee has assembled is excellent as is the way they are introduced. Much like Robert Altman's brilliant Nashville, the large number of characters just appear on the screen, without benefit of introduction. Lee assigns the task of deciphering their purpose and relationships to the viewer. Lee carefully composes each shot, making what goes on in the background as important as the foreground.

The construction is exemplified time and time again, such as when Buggin' Out (Giancarlo Esposito) challenges Sal (Danny Aiello) for the first time about the lack of black faces on the pizzeria's wall. The argument takes the foreground as Smiley, the stuttering man who peddles photos of Malcolm X and Martin Luther King, stands outside the store's window holding up the pictures. In fact, Lee sets up practically every scene in such a way. Characters discuss a certain issue or aspect of inner-city life while other characters lurk in the background going about their lives.

These touches prove plentiful, like when a streetlamp lights up behind Da Mayor's head as Mother Sister compliments him for the first time. One plot point that puzzles is what motivates Mookie to act the way he does toward the movie's end. Upon a second viewing, the hints dropped here and there at what's behind Mookie's action become more clear. No one, or two, newspaper articles can do justice to every question and aspect of Do the Right Thing, so let's just highlight the main points: it's mesmerizing, great and important. That should be the focus of any discussions of the film.

Comments:
Whenever I think of this film, I'll always remember Joe Klein's absurdly racist review (which I wrote about here) saying how only White people would be able to see the film as a call to debate and not arms. Black people wouldn't get the movie's complexity and would riot, thought Klein. His comments, and Hollywood's desire to honor instead a film about a subservient Black man driving around some mean old biddy, only elevate the importance of this film.

I also remember Bill Reel's answer column to Klein, wherein Reel humorously described his pasty White legs sticking out of his shorts while sitting at a predominantly Black attended showing of the film. For the record, there was no Klein-predicted riot at the end of Reel's screening nor mine. I should have sued Klein for a refund on the brass knuckles I bought in anticipation of the rioting I'd be doing after the movie was over. Bastard.