From the Vault: Dazed and Confused 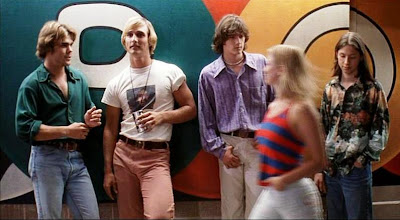 As with his great film Slacker, Linklater's Dazed and Confused veers off the obvious route of angst-ridden twentysomethings trying to cope in the 1990s.

In Slacker, Linklater evoked that generation without focusing exclusively on that demographic. Instead, he created characters of all ages who embodied that spirit. In Dazed and Confused, he takes an almost anthropological approach by vividly recreating the year 1976 as a pivotal point in the evolution of both 13ers and baby boomers.

The story starts on May 26, 1976, as the school year is coming to a close. In the small, unnamed town, the annual ritual begins of incoming seniors (class of '77) celebrating their new rank by initiating the newly minted freshmen (class of '80) with various hazing rituals.

Though Dazed offers a skeletal plot, it's not aiming for story. Rather, it's focused on flawlessly re-creating a time and place. With the use of vintage music, it could be labeled as Linklater's American Graffiti, only he doesn't bother to tell you where the characters go once the film ends.

The performers, few of whom are recognizable from other work, all play their parts naturally and effortlessly. No star turns pop out because the bulk of the characters are equal in the film's context.

The class of '80 were among the first 13ers to finish high school and the class of '77 marked the tail end of the boomers. Though the differences are subtle, Linklater delineates them as the freshmen see the shallowness in the seniors' traditions. At the same time, the seniors' idealism has been whittled down to refusing to take no-drug pledges and in admitting that aiding the less fortunate isn't as lucrative as going for the gold.

Ultimately, the subtext doesn't distract from the enjoyment of the film, which depicts high school life that any generation can relate to, with the chronic need to belong and the fear and anticipation of what lies ahead. It also happens to be incredibly funny. No one can truly say what will happen down the road. With Dazed and Confused, Linklater does hold out the promise that the 13th generation will produce artists whose talents grow with them.