From the Vault: The Crying Game 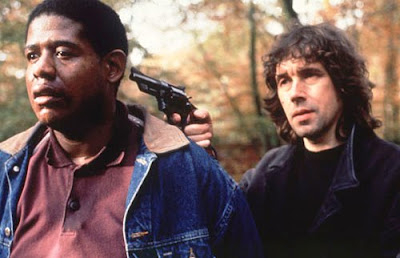 Col, the wise and knowing bartender in The Crying Game asks the question, "Who knows the secrets of the human heart?" Both secrets and heart are at the center of The Crying Game. Stephen Rea portrays Fergus, a member of the Irish Republican Army, who participates in the abduction of a British soldier (Forest Whitaker).

The problem is, Fergus isn't completely cold-hearted and he allows himself to develop a friendship with the soldier and, when asked to deliver on a favor, decides to fulfill it.

Neil Jordan wrote and directed The Crying Game and it is one of the most original screenplays in a long time, constantly surprising the audience with its shifts in moods from suspense to humor, from romance to betrayal. For most films, mood swings are a balancing act that's hard to pull off. In The Crying Game, the shifts are deftly handled, always seeming just right. By the film's end, the viewer can't help but smile at the epilogue that some may think unnecessary but, when you let it sink in, turns out to be the perfect end to a perfect movie.

In addition to Rea's great performance, he is surrounded by a great supporting cast including Whitaker, the marvelous Miranda Richardson as his fellow terrorist, Jim Broadbent as the bartender Col and, most of all, the film debut of Jaye Davidson, in the pivotal role of Dil, the soldier's girlfriend.

Technically, the film soars as well, using the title song, a hit in England during the 1960s, and tunes ranging from the original, good version of "When a Man Loves a Woman" to a different rendition of "Stand By Your Man" to set the film's mood in crucial scenes.

Additionally, the musical score by Anne Dudley and crisp editing that holds the entire package together are excellent as well.

At its heart, The Crying Game is more than a thriller, more than a love story - it's a filmed essay on human nature, a wonderful tale that demands discussion after it has been seen.

Comments:
The majority of the people who say they don't care for this film - or don't really see what all the fuss is about - are the ones who knew what "the twist" was going in. I personally knew nothing about The Crying Game before I saw it, which was long before the film had attained sleeper hit status and "the twist" had become the subject of furious hype. When I say I didn't know anything, I mean I didn't know anything. Hadn't heard or read anything about it, didn't even know what it was about, who was in it, or that it was Irish. My friend wanted to see it mainly because she thought the title sounded cool (God bless messed-up teenage girls and their fascination with anything that sounds even vaguely sado-masochistic.)

Needless to say, it shocked the hell out of me - and while the twist may seem passé, even tame, by a modern standpoint (meaning an age in which a show like Nip/Tuck can air on basic cable), I can't remember any film of the 80s, 70s or earlier dealing as boldly - or as confrontationally - with the concept of sexual identity, or so thoroughly subverting an audience's expectations. I have never seen so many grown men walking out of a theater looking so genuinely stricken and confused - it takes one hell of a smart, brave, purposeful film that can make people question not only traditional concepts of gender behavior (masculinity vs. femininity), but whatever they thought they knew about themselves.

I wish everyone could have seen this film under similar circumstances as I did - before the hype had launched into overdrive, creating expectations that no film could possibly live up to, and key plot points were spoiled by loose lips. The people who didn't see it early really missed out.

This is off topic, but since you don't have cable, I thought I'd share it. Last week's South Park concerned terrorists invading the world of our imagination (where Butters was trapped). The Pentagon, stumped as to how to fight them on this battlefield, enlist Hollywood directors for help. First, they call in M. Night Shyamalan, but he just peddles his usual stuff. "That's not an idea, that's a twist," the general says and has him thrown out. Then comes Michael Bay, who of course offers nothing but possible spectacular explosions or crashes. "That's not an idea, that's just special effects," the general says before throwing him out. Last, in comes Mel Gibson, shirtless, with his tongue hanging out and playing with his nipples. Gibson finally suggests that they should search the footage of the terrorist tape of the imagination to see if anything doesn't belong. "Say what you will about him," the general says, "the man knows story structure."

I didn't know anything about The Crying Game when I saw it either. But I find it damn near impossible to believe that anybody was fooled by Jaye Davidson. The first shot of him has stubble. I said to my friend "either that's a dude or a really shitty sex-change." He said "nah! She's hot!" Man, when that ding-a-ling showed up on the screen, he let out a yell. I said "Nyaah!" He squirmed the entire movie after that, and vowed never to go see a movie with me again.

What I love about this movie is how everything is right there for you to figure out. The Metro is always a gay bar, but Jordan lights it brighter once the secret is out. Other little visual things and prior dialogue lines are more clearly defined once Dil shows his pickle. I also love how the movie changes into a different movie practically every ten minutes, but manages to hold together better than anything Jordan has done.

My first foray into the internet world was on a Crying Game bulletin board on the now defunct Prodigy. So blame Neil Jordan for the Odienator blog/bulletin board persona.

I wish I'd seen that South Park episode!

I've been watching Neil Jordan's films since A Company of Wolves. Has anyone else noted how similar Jaye Davidson looks like Cathy Tyson of Mona Lisa?

I had notice the resemblance between Tyson and Davidson. Odie aside, I found at the time that it usually were women who figured it out quicker than the guys did.

what did you think about his later films: End of the Affair and Breakfast on Pluto?

I never saw Breakfast on Pluto. The End of the Affair I thought was good, but not great, mainly because the acting was so solid.

Wait a minute. Now I remember: I did see Breakfast on Pluto. I had tried to block that one out because I found it fairly unbearable to watch.

The Crying Game is Jordan's crowning achievement. As for the rest...

Mona Lisa is a taut, smart piece of filmmaking with terrific performances by Bob Hoskins, Cathy Tyson, and a surprisingly subdued Michael Caine. The Butcher Boy, while unfocused, is a work of subversive wit, and achieves moments of brilliance. The Good Thief is an effective heist film with an enjoyably funky Eurotrash vibe.

The Company of Wolves is a revisionist re-telling of the Little Red Riding Hood story which brings the psycho-sexual implications to the forefront - not very successfully, but containing a delicious performance by Angela Lansbury as the grandmother. The End of the Affair is well-acted, even if the filmmaking seems rather impersonal - there's really nothing to distinguish it as a Neil Jordan film. High Spirits is kind of a mess - the film was butchered in the cutting room by the studio brass - but it's a funny, kinky ghost story given a shot in the arm by the gleeful hamminess of Peter O'Toole.

Michael Collins is a standard Hollywood biopic with Liam Neeson trying to be legendary and Julia Roberts pretending to Irish. Interview with a Vampire is undone by uncommonly weak performances by the two miscast male leads, neither of whom has ever demonstrated any affinity for period pieces - even more damagingly, whatever element of homoeroticism Jordan was trying to create was undermined by Cruise and Pitt's complete lack of chemistry (you'll find more sexual tension in a third grade classroom). We're No Angels is a subpar remake, and The Brave One is two hours of Jodie Foster looked pained and intense...yet again...only this time while blowing people's heads off.